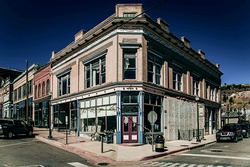 Sick of the same old predictable Holiday Inn Express? Now, adventurous travelers can check their bags at Colorado’s very own haunted brothel. Otherwise known as The Black Monarch Hotel, the former Gold Rush house-of-fun-turned-boutique-hotel opened its doors to the public May 1 in the former boom town of Victor (just outside gambling mecca Cripple Creek.)

According to owner Adam Zimmerli, a music promoter from Denver, in its heyday, The Black Monarch – originally known as The Monarch – served as a casino, saloon and brothel. And to add to the Western lore, it was also said to be haunted by the ghost of a miner killed there in a gunfight.

However, as is often the case, tragedy stuck in 1899, when a fire burned The Monarch to the ground. The hotel soon rose again from the ashes, as did the ghosts. According to legend, those working the hotel bar have reported strange sights. In recent years, multiple parties have woken in the night to hear a woman laughing and men shouting at each other, only to find the next morning they were in the hotel alone.

And in case all this isn’t enough to send guests scurrying for their bags (just don’t go for the elevator!), the rooms are theme after serial killers Elizabeth Bathory and H.H. Holmes. For extra creep factor, the interior is packed with goth curiosities, taxidermy, oddities and trinkets.

To check it out or book a serial killer suite, visit www.blackmonarchhotel.com.