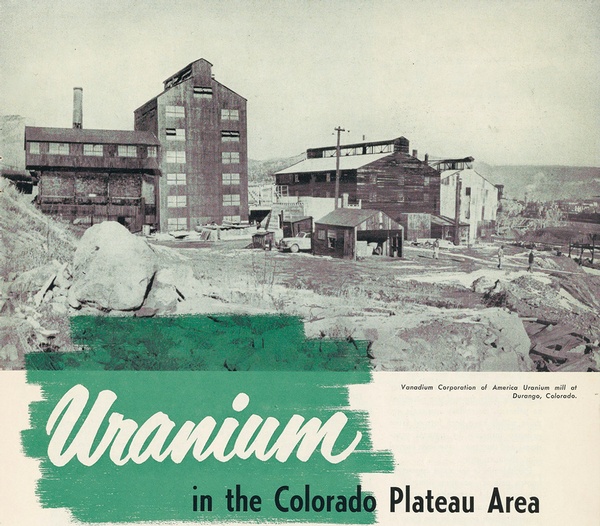 A photo of the old Durango Smelter from the Vanadium Corp. of America's magazine, the Vancoram Review, dated December 1949. Today, Aug. 6, 2020, marks the 75th anniversary of the dropping of the atomic bomb on Hiroshima. Most, if not all, of the uranium in the Hiroshima bomb was initially processed in Durango.

john van becay - 08/06/2020
Seventy-five years ago today – Aug. 6, 1945 – the uranium bomb, Little Boy, was dropped on Hiroshima by American forces. Three days later, the plutonium bomb, Fat Man, was dropped on Nagasaki.
Unsure of this startlingly new science, the United State had developed two different atom bombs – the uranium bomb and the plutonium bomb. Scientists were confident the uranium bomb would work, but the plutonium bomb remained a question mark.
Within a week of the bombs falling, WWII – a conflict that had lasted six years, taken some 80 million lives and whose bloody end appeared to be nowhere in sight – was over.
Most, if not all, of the uranium in the Hiroshima bomb was initially processed in Durango. For better or worse, the world – and Durango – had entered the Atomic Age.
Smelter Mountain and Smelter Rapid are namesakes of Durango’s first industry – the smelter – founded in 1881, the same year as the town. They are all that remain of the ore smelter that put early Durango on the map. That and the heavy metals and poisonous byproducts of 80 years of smelting ore that were dumped into the Animas River, contaminating food and water for more than 60 miles downstream. Durango smelted many types of ore, all of which produced toxic waste. But uranium was the worst. Its byproducts were not only toxic, but radioactive.
During WWII, the Durango Smelter was part of a covert network of mines, smelters and refineries on Colorado’s Western Slope whose highly classified work was delivering uranium for the first Bomb. Uranium originating from the Durango Smelter had been used since the earliest days of the Manhattan Project in 1942. (Vanadium was the 4  official product of the Durango Smelter. In secret, they also smelted uranium.) In 1946, the Vanadium Corp. of America (VCA) took control of the Durango Smelter and began openly processing uranium for the Defense Department.
Durango was proud of its contribution to the war effort and to the Cold War. The growing mountain of radioactive waste next to the smelter drew little attention at first. Neither did the holding ponds of bright green radioactive and toxic waste left over from the uranium processing. Although some of the contaminated waste water went into the ponds, the rest was dumped directly into the Animas. Before long, the ponds began leaking their poisonous brew into the Animas as well.
By the mid-1950s, the smelter’s impact could no longer be ignored. It was impossible to secure the mountain of tailings that loomed over the smelter. Nothing would grow in the radioactive waste. Wind blew the fine pink dust over south Durango settling on cars, houses, front lawns and grade school playgrounds. Vanadium Corp. of America began selling the radioactive waste to contractors as a substitute for sand.  To this day, radioactive waste lurks in roads, sidewalks and house foundations throughout the area.
The deceivingly pretty pink dust contained radium that releases odorless, colorless, radioactive radon gas, the second biggest cause of lung cancer after cigarette smoking. In addition, the smelter sent billowy coal smoke north and northwest, over downtown and up Lightner Creek, contributing serious air pollution to the area. Practically every photo of the south part of Durango during the smelter era features a heavy plume of thick smoke smearing the sky.
But it got worse. At its peak, more than 500 tons of uranium ore were processed daily at the Durango Smelter, using thousands of gallons of water from Lightner Creek. In the 1950s, leaks from the tailing ponds and direct discharge dumped an average of 340 gallons a minute, nearly 490,000 gallons of polluted water daily, into the Animas.
The Vanadium Corp. smelted mostly uranium at the Durango mill. Uranium is a parent element. The daughter radioactive isotopes – including thorium, polonium, radium and bismuth – were discarded into the environment. Of these, radium 226 presents the greatest health hazard as it collects in bones like calcium.  Radium 226 is absorbed and concentrated by algae in the river and continues up the food chain – from fish and plants that uptake the radium in their food and water – to larger animals and, ultimately, humans. Once humans ingest contaminated food, water or milk, radium 226 migrates to the bones and teeth, where it lodges and accumulates. This is particularly dangerous to young children. Because there is no conventional treatment to remove radium from water, regulations prohibit more than trace amounts of this dangerous isotope in drinking water.
Samples taken as far as 60 miles downstream of the smelter in the late 1950s showed radium levels in drinking water over twice the regulatory limit. For decades, residents of Aztec and Farmington, which get their drinking water from the Animas, were exposed to elevated levels of radium. Closer to home, samples taken from water 2 miles below the smelter, about where Walmart now stands, had 3.5 to 7 times the regulatory limit for radium, which was found in mud, algae and insects at poisonous concentrations. Even now, elevated levels of radium 226 can be detected in the river bottom alongside toxic metals from earlier waste.
In 1963, unable to clean up the site, and confronted with its serious pollution, the smelter was moved to Shiprock, on the Navajo Reservation. Meanwhile, the abandoned ponds in Durango continued to leak toxic radioactive liquids into the Animas. The mountain of poisonous pink dust continued to blow over Durango.  In addition, the site began contaminating the groundwater beneath it. Only the noxious coal smoke was gone.  Twenty-five years later, with Superfund money, the site was finally cleaned up. It took five years and $500 million, finishing in 1991. A similar effort and cost was spent on decontaminating the Shiprock site.
Vanadium Corp. of America never took responsibility for the massive pollution it caused while operating the Durango and Shiprock smelters. The last remnant of the Durango Smelter – the smokestack – was dynamited in 1988, a fitting end to an era and to the Cold War. Durango’s smelter was gone – into the annals of history. But its health risks and environmental impact remains.

Many thanks to Norman Norvelle.  Much of this article was derived from his definitive work, "Animas River Environmental Contamination from the Durango Mill Site - Over 100 years of River Pollution."

Above: Archival photos from the 1949 Vancoram Review, including a scenic view of downtown Durango from the smelter site.