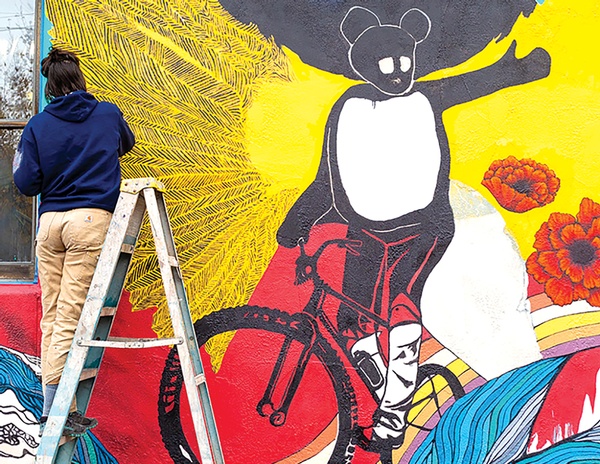 A?mural at the Durango Cyclery has created a bit of a pop-up community the past several weeks as a handful of local artists liven up the previously bare wall./ Photo by Jennaye Derge

When you see a panda with big yellow wings riding a bike on a multi-colored road, it’s hard not to stop and stare. Which is what keeps happening in an alley off 13th Street in downtown Durango. The short throughway has recently become a hotbed for interested bystanders and rubberneckers, all because of an intricate mural being painted on the side of the otherwise unnoticeable Durango Cyclery wall.

The Cyclery has been in its current, semi-concealed location for 40 years. While locals know the spot for its uniqueness and appreciation of bicycle subculture, the bicycle shop has never stood out in any other obvious ways. At least that’s the case for its outside walls.

Inside, the bicycle shop is employed with a group of artists, painters, musicians and tinkerers who not only want to fix bicycles, but also bring color and art to Durango. Luckily, with the right amount of luck, planning and hard work, they have done so.

“It was sometime in July,” Tony Lemos, a contributing artist and neighbor of the Cyclery, recalled of the first step toward the mural. “We were all sitting out front of the Cyclery on the bench when Bailey proposed the idea, and we decided to move forward with it.”

“Bailey” is Jonathan Bailey, a longtime Cyclery employee and local artist. He’s also the perfect person to have thought of the mural in the first place because, at the time, he was living right next door. His windows looked out onto the bare wall, and the obvious thing for an artist to want to do is paint it.

After he proposed the idea, Lemos went online and researched ways to fund the project, finding the Durango District Initiative’s “Durango Creates!” grant. The grants are administered by the City of Durango and are meant to foster art and culture in communities around town. In this case, the community is the one surrounding the bicycle shop, and it seems to have been growing since the brightly colored mural started taking shape. When the contributing artists are painting, passersby often stop to look, take pictures and chat with the artists.

“Every day there are people cheering us on, or bringing us ice cream, or whatever,” Jenn Rawling, a local artist and contributor of the mural, said. “Everyone has been really encouraging and that’s nice because these things take hundreds of hours, so you hit that low point and someone comes by and shifts the energy a little bit. And that’s part of the culture of the Cyclery – being really inclusive and really connected to the community.”

This is exactly what Cyclery owner Joe Hanrahan had hoped to achieve after buying the shop in June 2020. Hanrahan has tried fostering the shop’s connection to the community and, much like his predecessors, has done so in a funky way. In the year-and-a-half he has owned the shop, Hanrahan has decorated the walls with old cycling posters and work from local artists. He also repainted the walls and painted the floor a bright turquoise with the shop’s iconic sweetheart crank logo emblazoned on top.

“He’s brought a ton of positive energy, and a ton of vision to the shop,” Rick Elliot, the Cyclery’s original owner and founder, said of Hanrahan. “He has an idea of where he wants it to go and a huge amount of enthusiasm, so he has really revitalized it. It was relatively run down and he’s put a lot of new color and look to it.”

And Hanrahan has no plans of slowing down his enthusiasm for where and how he can add to the bike shop’s positive energy. That is why he applied for the Durango Creates! grant in July, receiving $5,000 to help pay local artists to make the otherwise normal wall into a piece of vibrant, eye-catching art.

“The awesome thing about this mural is that it has brought together this group of artists and the community,” Hanrahan said. “And the reception of the grant from Durango Creates! was amazing and felt really good. It inspired us to really make something cool, and the fact that you can look at the mural and see the work of six different artists, all putting their own styles in different places, with the backdrop of Bailey’s vision and design feels really good.”

The six local artists include Rawling, Lemos, Thomas Bailey, Dan Groth, Alicia Rose Pastore and, of course, the head artist, Bailey, who created the design of the mural. The design itself, a flowing illustration, is now in its second iteration. But even the second time around isn’t so concrete. According to Lemos, each of the artists have had space on the wall to add their unique touches, so, while the mural is congruent, anyone who stops to really look at it will see varying artists’ visions.

Some of those details, Hanrahan said, are nods to the shop’s history and culture. There are symbols that pay homage to the important aspects and people – past and present – that have been involved in the Cyclery.

Hanrahan even gave a couple of these clues away: The sweetheart crank that is painted at the top of the mural, for instance, is the Cyclery’s original logo, which pays tribute to the shop’s original owner, Elliott. And “the figure” – the main Panda-like creature in the center of the mural – is a shout out to another former owner, Russell Zimmerman.

But, as the artists would like it to remain, the rest of the mural is up to interpretation by its viewers.

And, if you’re one of the lucky few who has been able to see the month-and-a-half process of the mural, you will know that it is indeed an experience. At any one time, when the artists are out painting on the wall, there seems to be an organic gathering of food, conversation and kindred spirits. It’s just the sort of experience anyone can expect to have inside, or outside, the Durango Cyclery.

“Its been sweet to work together as artists on a project like this, that is deeper than the project itself,” Bailey said. “Everyone I’ve watched along the way – owners, customers, employees and cycling enthusiasts – there is a common thread and a common heart, which has made the shop continually survive.” 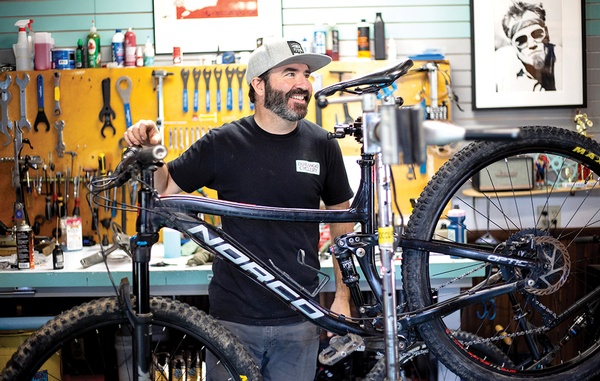 Joe Hanrahan took over the Durango Cyclery in June 2020 and has since revitalized the downtown bike shop./ Photo by Jennaye Derge