Adopted & abandoned
As world reopens, many people are giving up pets that helped them through lockdown 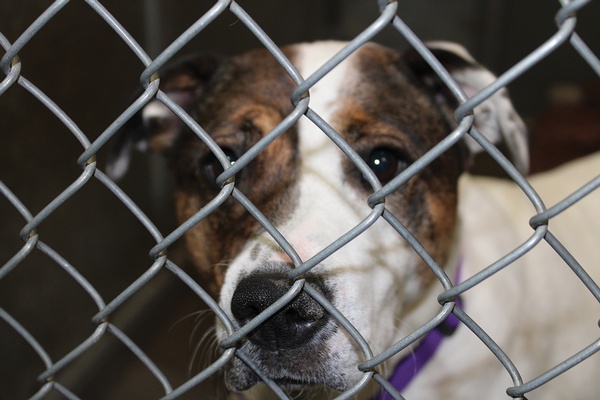 Many pet owners who adopted during the height of the COVID-19 pandemic are giving their animals up as the world reopens and they return to busy lives. Does this photo make you sad? Then go adopt him! / Photo by Jonathan Romeo

If the last year and a half has tested your faith in humanity, this isn’t going to be easy to read. Animal shelters across Southwest Colorado are seeing record numbers of abandoned pets, largely because people who adopted during the height of pandemic lockdowns no longer have time for their dogs or cats.

“During the pandemic we saw a lot of adoptions,” Emily Phillips, marketing and development manager for the La Plata County Humane Society, said. “But now people are back at work or traveling… and it’s just not working with their lifestyle.”

As the COVID-19 pandemic started to spread in March 2020 (as if we could forget), health officials started asking people to work and spend more time at home in an effort to slow the spread of virus. You know, trying to “flatten the curve” by going on something called “Zoom” with your “Quaranteam.” Man, that was a weird time.

But with more free time at home, and Netflix only able to consume so many hours of the day, an increasing number of people decided a pet would be a good way to spend the long, dull days rather than doomscrolling the internet. “When the pandemic hit, I guess people got tired of talking to their plants,” Ken Hibbard, an adoption counselor at LPCHS, said.

Indeed, a total of 1,600 animals were adopted from the LPCHS in 2020 – just 100 fewer than 2019, despite the shelter being shut down for a time and adoptions requiring appointments. Because our society needs a buzzword for everything, these animals were dubbed “pandemic pets.” In a survey of 1,000 American pet owners conducted by Rover.com, 93% of people said their pet had improved their mental/physical health in 2020, with 80% saying it made working from home more enjoyable.

But now, it seems, those attitudes are shifting. While landing pets in homes is viewed as a success for animal shelters, they knew once the world reopened and people got back to their busy lives, there could be an issue of mass pet abandonment. And that problem has arrived.

“It was definitely something on our minds and we talked about it during the pandemic,” Phillips said. “You always hope adoptions are forever, but sometimes it’s out of our hands.”

Since the spring, LPCHS has seen an increase in animal surrenders, while at the same time, a declining adoption rate. And while no one is explicitly listing the supposed end of the pandemic as the reason they’re giving up their pet, people are saying they no longer have time or they are moving. Other factors for high intake numbers are at play too, such as the spay-and-neuter program being suspended due to the pandemic, resulting in more strays.

The LPCHS does have an extensive screening process before animals are adopted out in an effort to make sure it’s a good fit with potential owners. The shelter requires people to fill out a detailed application, which asks about their lifestyle and housing situation, and if they are able to cover the financial costs of having a pet.

“We really talk to them and get to know who they are,” Phillips said. “It’s an interview in a sense because we want to make sure animals go to the right place.”

As an adoption counselor, it’s Hibbard’s job to try to weed out people who may not take adopting a pet seriously, which can be a years-long commitment. After more than a decade, Hibbard said he’s become a sort of expert animal adoption interrogator.

“I look them in the eye, and hear what they have to say,” he said. “But you never really know because people can come in and say the right things. We’re just trying to get these dogs rehomed, and there isn’t a science to it. People tell you what they think you want to hear.”

These days, the shelter is basically full, and it’s increasingly harder to not turn animals away, Hibbard said. It should be noted that LPCHS does not turn animals away based on age, breed or behavior. And, LPCHS tries to avoid euthanizations at all costs, usually only putting down animals with extreme behavior issues or medical conditions. As a result, 96% of animals that enter the shelter find homes.

Lisa Parker, who runs Parker’s Animal Rescue, said she, too, receives multiple calls a day from people looking to give up their pets. Her rescue, however, is a much smaller operation, and she simply doesn’t have the capacity to meet the demand.

“People are treating their pets like disposable family members of convenience; they got one during the pandemic because it was super cool, and now it’s (no longer convenient),” she said. “But do you have a child and then two years later decide it’s not convenient anymore? And a dog losing a home is tragic.”

The issue is not exclusive to La Plata County.

At the Humane Society of Pagosa Springs, Robson Reyes, director of marketing and development, said the shelter there is also nearly full. “It’s the fear we had from last year when we were getting a lot of adoptions,” he said. “Some of those (pets) are coming back now with people going back to work.”

One sad, reoccurring situation Reyes has seen in Pagosa Springs is low-income families that are priced out of their homes not being able to find new housing that allows pets. As result, many people are forced to give up their dog or cat. “Our town is growing, and a lot of new people are buying those places,” he said.

Reyes is speaking to a whole other problem for animal rescues. A 2015 study from the American Society for the Prevention of Cruelty to Animals, for instance, found nearly half of surrender pets involved family or housing problems. And, an analysis of 1.1 million surrender cases by the Best Friends Animal Society found evictions and housing issues were the cause in nearly 15% of cases.

But back to bored people who adopted pets only to return them when things got busy. Karen Martiny, executive director and founder of Animal Rescue of the Rockies, a statewide organization, reaffirmed this is an issue across Colorado, and even the country. “I think it’s the return of a more normal lifestyle after the stay-at-home period,” she said. “A lot of people have just gotten too busy and gone back to work, and decided they don’t have time for a pet anymore.”

Last year, Martiny said, was one of the best for adoptions. Animal rescue staff tried their best to counsel people, but some didn’t get the message. “It was one of our biggest fears from the beginning because we know how people are,” she said. “It’s disheartening for sure. But people are going to be people, unfortunately, and we just need to focus on what we can do for the animals.”

For trying to comprehend how people could act so callous, we turn to Brian Burke, Fort Lewis College professor of psychology, who said unfortunately, humans are bad at predicting what will make them happy in the future and what capacities they will have going forward.

“For example, many pet owners are victims of ‘presentism,’ the notion that we can only really know what we want today; hence, the mass adoption of pets when most of us were lonely and had more time on our hands during COVD-19 lockdowns,” Burke said. “Moreover, there is also the phenomenon of overconfidence bias; we think we are more capable than we in fact are.”

Burke said to think of the kid trying to convince his parents to get a dog by promising to walk it every day, and then, obviously doesn’t. Adults do this too, because, as he previously mentioned, it is hard to predict the future.

“In other words, it is hard to know whether you (or your family) will enjoy a pet until you have one,” Burke said. “But if it’s your first time adopting a pet, it may be impossible to predict whether the good aspects – the cuddles, the exercise, the hijinks, the love – will outweigh the challenging aspects of pet ownership, such as scooping poop, walking your dog in the cold and paying for stuff.”

Alright, moving past the despair and overbearing sense that people are the worst. What can we do?

For starters, it’s a common misconception that LPCHS (celebrating its 50th anniversary this year) is associated with a national organization, like the ASPCA or Humane Society. Instead, the shelter is independently run, with its prime source of funding from sales at the adjacent La Plata County Humane Thrift Store. So, you could donate items or shop there, or just donate money directly to the shelter.

This year, LPCHS is asking for more funding from the City of Durango to help with the rising costs of operation. The shelter, for years, has also dealt with an outdated building. And, like nearly every business these days, it’s suffering from a staffing shortage (attention job seekers!)

And for people who are unable to adopt, you can offer temporary foster homes for pets, volunteer at the shelter, donate blankets and sheets, or just simply share LPCHS’s posts on social media to spread awareness. Cue the sad Sarah McLachlan song…

“It’s just a really crazy time,” Hibbard said. “It gets me down once in a while, but then I just go hang out with the dogs.” 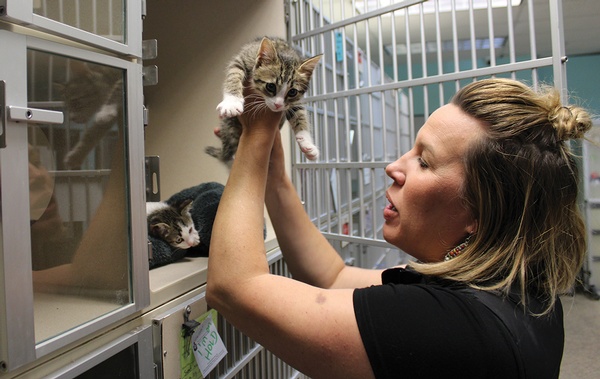 Emily Phillips, with the LPCHS, holds a kitten at the shelter. In addition to pet surrenders, the shelter is seeing an increase in strays due to the pandemic shutdown of its spay and neuter program. / Photo by Jonathan Romeo