As the wheels turn
OHVs banned, then unbanned, from Silverton's streets 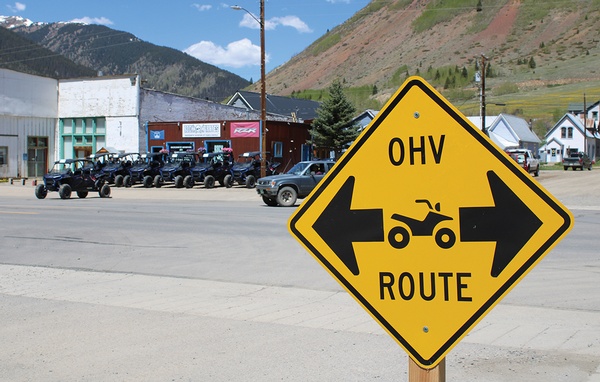 A sign indicating the OHV route in the town of Silverton may become a moot point later this year. After many twists and turns, the subject of banning OHVs from the town's streets will go to a vote later this year. A separate vote would ask residents whether they want to allow OHVs on just the town's current designated route or everywhere. It's unclear how the two competing votes would impact one another. / Photo by Jonathan Romeo

After a seven-year experiment, Silverton is grappling in a serious way with whether to allow off-highway vehicles within town limits.

In an abrupt, and to many shocking, move, the Silverton town trustees voted 4-3 last month to ban OHVs from riding in town, just days before the start of the summer season. But the battle is far from over.

This week, residents filed a protest and temporarily overturned the ban, which was to take effect June 20, ensuring the thunder of OHVs will continue this summer. And now, a mess of petitions filed by residents may force two separate elections on the matter in the coming months.

It’s complicated, with a dizzying array of moving parts, but to say the debate over allowing OHVs in Silverton has sent the town into an uproar would be an understatement.

Complaints over the motorized vehicles – the sheer number, noise at all hours, illegal off-roading – is an ongoing and contentious debate among the town of about 600. Some Silvertonians, especially in the past three years, have said issues brought on by OHVs have reached a tipping point, ruining the quality of life and forcing some longtime locals to question whether it is time to leave.

But support for OHV use in town remains high, especially among the business community, which sees visitors who travel from all over the country to ride the San Juan Mountains as a vital source of tourism dollars.

If prohibited on town streets, OHVs would be, of course, still allowed to ride designated routes on the outlying San Juan County roads and on public lands. But for many locals, whether to allow the vehicles in town raises all kinds of questions about what Silverton wants to be in the future.

“Our town should not be subjected to becoming some sort of an amusement park,” Karla Safrankski, a resident since 1976, said at a public meeting this month. “This is where I live… and this is where I want to continue to live.”

Though tourism had been part of Silverton’s economic fabric for decades, reliance on visitors spending money in the historic town became the main source of income after the closure of the last mine in 1991.

Ever since, Silverton has tried to allure vacationers to the town at an elevation of 9,318 feet, whether through the Durango & Silverton Narrow Gauge Railroad or extreme skiing at Silverton Mountain.

In 2014, the town of Silverton voted to open select streets to OHVs, providing easy access to those traveling the backcountry roads to businesses in town. But, with OHVs’ stark increase in popularity, some vexed residents started to push back on the noise, dust and traffic, as well as illegal off-roading and the environmental damage that comes with it.

In 2017, residents forced another general election to decide whether to open the entire town to OHVs, completely ban them or keep things the same.

Silvertonians decided – by a slim margin – to keep the existing regulations. The problem is, the adverse impacts also remained, and OHV use in town continued to explode, especially with the rise of razors and side-by-sides.

Last summer, the San Juan Mountains around Silverton were pounded with visitors, and not just OHV riders. But the loud and visible vehicles, still contentious among locals, took center stage in the debate about town.

A BLM study estimated more than 195,000 vehicles traveled the popular Alpine Loop that traverses mountain roads through Silverton, Lake City and Ouray in 2020, up 23% from 2018. About half those vehicles were thought to be OHVs.

With the D&SNG not running trips to Silverton because of the COVID-19 pandemic, thereby depriving the town of thousands of visitors, business owners lauded OHVers as the economic savior.

Others, however, said the crazy day-to-day, all-hours riding in town was a breaking point, expressing legitimate fears of becoming the high-country equivalent of Moab, an off-road mecca.

It’s been acknowledged, too, that residents who live along the route are disproportionately impacted, having to keep windows closed, not being able to hang out outside and waking up late at night or early in the morning to the din of OHVs.

San Juan County Sheriff Bruce Conrad, who regularly says, not jokingly, that the letters O, H and V are worn out on his computer keyboard, has maintained for years his office is unable to keep up with the amount of riders breaking the rules.

“At what point is our quality of life no longer worth the finances?” Conrad asked in summer 2020. “Where do we draw that line in the sand?”

Silverton passed through last fall and most of the winter without addressing the OHV issue. In early spring, with summer looming, a working group formed to come up with potential solutions. But before any recommendations materialized, a citizen petition calling for an outright ban of OHVs in town sent the situation into disarray.

On May 18, the seven town trustees had the choice to vote yes on the petition, effectively banning OHVs, or vote no, which would have sent the question to voters.

The contentious, marathon meeting drew about an even split of residents for OHVs in town, and those against.

Nicole Bellman, a Silverton resident who backed the petition to ban, highlighted that catering to OHVers would push out other recreationists from coming into town to spend money.

“OHVs are ruining our quality of life, and we need to put our residents first,” she said. “It’s really divided the town and created animosity … but Silverton has been discovered, and we’ll have tourism no matter what.”

A necessary pain in the butt

Pinning down just how much OHVers infuse into Silverton’s economy is nearly impossible. Suffice to say, the town’s sales tax, a good indicator of economic health, has been steadily on the rise in recent years. While the increase in sales tax does correlate with increased OHV use, the sales tax boost also follows the same trend of most mountain towns in Colorado, which are experiencing more visitors.

Anecdotally, however, Silverton business owners say the growth is driven by OHV riders. “OHVs have saved this community numerous times,” Michael Loyer, who owns the Eureka Station restaurant, said. “Quality of life, it is a pain in the butt, but there’s lots of pain in the butts of living in Silverton.”

Since news of the ban spread, OHV rental companies and local campgrounds reported a spike in cancellations for this summer. It remains unclear if the reversal of the ban this week has changed the situation.

“We only shoot ourselves in the foot by losing the tax revenue these tourists bring to our town,” Gigi Raine, a full-time resident, said. “We’ll quickly become a ghost town if we don’t embrace our visitors.”

No matter what side residents are on, there was a general agreement banning OHVs in town right before summer was bad timing, both for families who booked vacations and businesses that had no time to prepare. And, it was repeatedly said the issue should be decided by a town vote.

“The timing of the vote couldn’t be worse,” Trustee Tyler George, a 40-year resident, said. “But my No. 1 concern is for the quality of lives of people who live here.”

George said Silverton has a long history of putting all its eggs in one basket – the mining industry, the D&SNG – to the ultimate detriment of residents. Coupled with the impacts of OHVs, the majority of trustees felt the time to act was now.

After the 4-3 vote, trustees were accused by some in the room of usurping the power of the people. George said later someone vandalized personal property at his home, which he believed was connected with his vote against OHVs.

The not so clear path forward

So, as it stands, the protest against the ban has reopened Silverton this summer to OHVs on the designated route, and the decision whether to prohibit the vehicles in town is expected to go to a general election in the next few months.

But not so fast.

In yet another snag, a second citizen petition submitted in the past few weeks has forced another special election slated for sometime between Aug. 2 - Nov. 1 with only two choices for voters: open the entire town to OHVs or revert to the existing designated routes. Perhaps intentionally written as such, the petition does not give residents the option for an outright ban.

Regardless, when asked how these two separate elections will affect the other, a town spokesman Wednesday was somewhat at a loss. And if history tells us anything, there’s sure to be any number of twists and turns over the next few months as residents reckon with the OHV issue in the apparently not-so-quiet mountain hamlet.

“Right now, we’re dysfunctional,” Silverton Mayor Shane Furman said earlier this month. “We need to figure out how to be functional.” 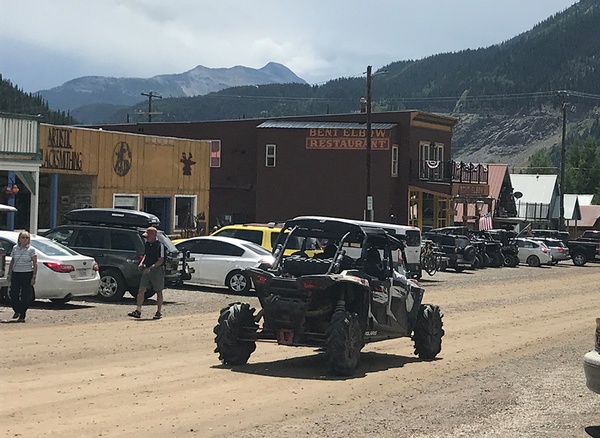 A side-by-side rumbles down Blair Street in Silverton, part of the town's current designated OHV route. Two separate votes would ask residents whether to ban OHVs in town or open the whole town up to them./ Photo by Missy Votel