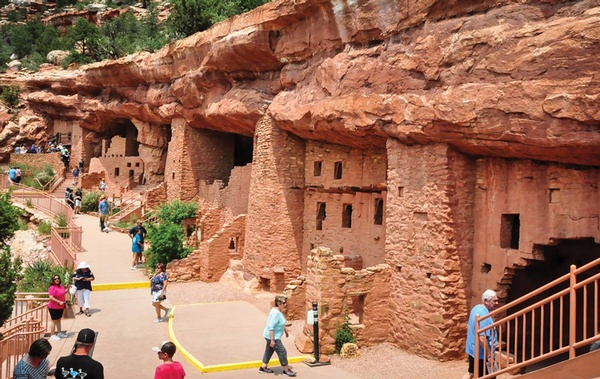 The Manitou Cliff Dwellings, near Colorado Springs, were relocated from McElmo Canyon at the turn of the 20th Century. The modern day tourist attraction is coming under fire for offering an inauthentic, and offensive to some, reinterpretation of history./Photo by Colorado Public Radio

Just outside Colorado Springs, the Manitou Cliff Dwellings have been welcoming tourists for more than 100 years.

In some ways, the ruins have taken on a history of their own as a destination for families, school trips and even international travelers. Ads for the Cliff Dwellings invite visitors to touch history.

That caught the attention of new Colorado resident Nick Culbert from nearby Fort Carson. He and his girlfriend went to the cliff dwellings to learn about the history.

When asked what he learned on his visit, Culbert said he was surprised to find out the dwellings in Colorado Springs are among the most perfectly preserved in all of the Southwest. But the history of the dwellings – their origin and authenticity – is complicated.

Some of the dwellings are indeed real, but they were taken from their original site near Cortez and reconstructed near Colorado Springs. Indeed, the structures some call “authentic” are called “fake” by others.

Raven Payment did not see authenticity when she visited the cliff dwellings over the summer. What she felt was disrespect.

“I guess I was very offended, but I was also infuriated,” Payment said. “This is some world-class audacity and entitlement to not only steal these things, but then to not even put them back together the way they were and how those people would have used them.”

Payment said the attraction also uses language that can be offensive. “From a larger, broader conversation, it’s reinforcing stereotypes that affect us in the modern age and how we move through the world socially and even politically,” she said.

So, how did the cliff dwellings end up in Manitou Springs?

Back at the turn of the 20th century, concerned Coloradans wanted to stop the pillaging and looting of ancient Indigenous sites. Virginia McClurg and Harold Ashenhurst thought the best way to preserve one of these sites was to move it closer to where white Coloradans were settling. Thus, they had the homes of Ancestral Puebloans removed from their original site in McElmo Canyon to the Front Range.

However, the dwellings were reassembled using supplies not available to Ancestral Puebloans, like mortar. Broken bits of ancient pottery were also added into the binding mix, which further changed what these homes once looked like.

Archeologist Richard Wilshusen says those decisions damage the attraction’s claim to authenticity. “It would be like having a replica of the Taj Mahal somewhere and thinking that you’re in India and you’re not, you’re just viewing a replica,” he said.

Museums and cultural institutions all over the nation have been reevaluating how they’ve treated Indigenous historical sites. Some have made strides in diversifying staff, recontextualizing white-washed history and opening better lines of communication with affected communities. But some places have been slow to keep up.

For instance, Payment says the Manitou Cliff Dwellings use the term “Anasazi,” which has been deemed offensive by many Indigenous people. White archeologists adopted the term – which means “ancient enemy” – from their Navajo guides.

The descendants of Ancestral Puebloans don’t use the term and pushed museums to update their language. But many state and local guides still use it, and it figured prominently in the Cliff Dwellings attraction, even as recently as this summer.

Since then, the privately owned attraction has taken some steps to drop the use of the term, but it remains in some places. The owners and management of the Cliff Dwellings declined to be interviewed for this story.

Payment says she hopes people understand what it felt like for her and other Indigenous people to visit the attraction.

“The things that they are seeing at the Manitou Cliff Dwellings belong to people who are still alive, those are their relatives’ items,” Payment said. “So this is no different than going to a cemetery of their family. And if we pull things out of their family’s coffins and put them on display, they would probably be rightfully bothered by that.”