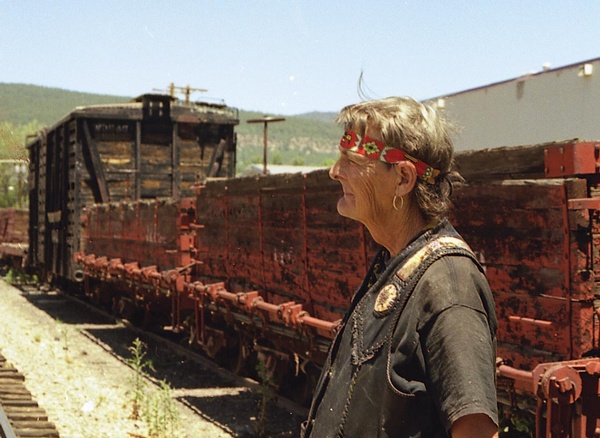 Little Beaver on the tracks, circa 2003.

One of the more remarkable, unique people ever to walk the streets of Durango was a fellow who went by the name Jay Little Beaver. Most just called him Little Beaver, Beaver or Beav. He made a living doing odd jobs at business around town, and in the process, wormed his way into our world, and vice versa. He was perhaps more representative of the essence of Durango than anyone else I can think of.

Little Beaver passed away at Four Corners Health Care Center on Mon., April 3, at the age of 74. When I felt compelled to write a memorial for this person I hadn’t talked to in 13 years, I wasn’t prepared for how many deep relationships he had formed over his tenure here. He was an enigma but genuinely loved by those he befriended, and it is my privilege to write this eulogy.

Loping gait, drawn haggard face, headband with a feather, fringed leather jacket, copious amounts of jewelry; Beav stood out. His distinctive look was partly based on the character of Little Beaver from the Red Ryder comics written by Pagosa Springs artist Fred Harman. Accounts vary on whether Beaver actually had any relationship with Harman, but he claimed to have played his namesake character in one episode of the TV series based on the comic.

Durango Diner owner Gary Broad had known Little Beaver for 37 years – longer than anyone else I spoke with – meeting him right around the time he bought said establishment. About 20 years ago, Broad and others were invited to watch that particular Red Ryder episode on an old film-strip Beav found. Beav was so excited and proud to be able to show others his past achievement. 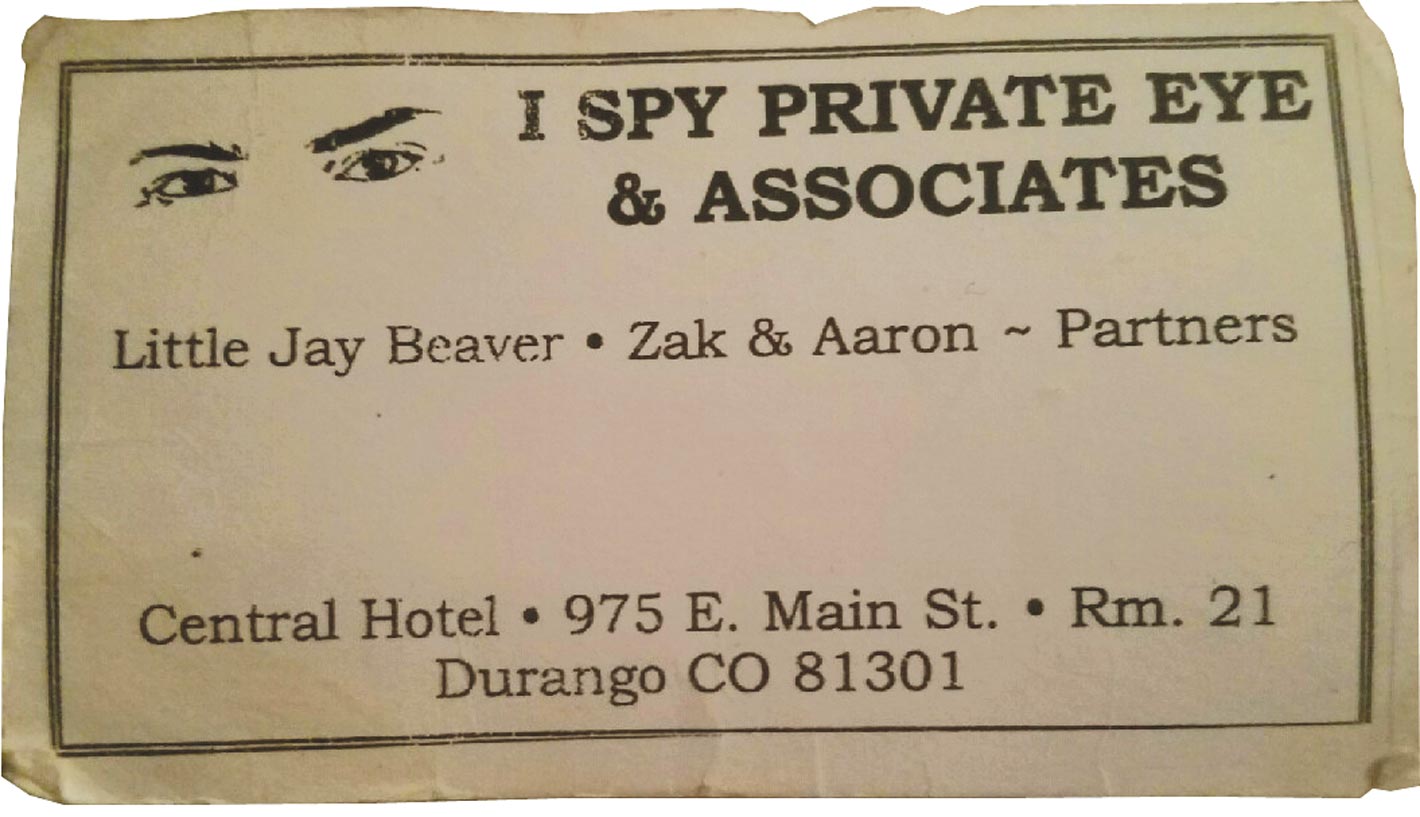 At some point, he legally changed his name to Little Beaver, his birth name forgotten by most. He had no known surviving family, and I received so many conflicting reports about his early life as to admit that his true origins may forever remain a mystery (though it does seem he came to live in Pagosa Springs at an early age). Indeed, Beaver himself told me on numerous occasions that no one really knows where he came from.

Little Beaver was a long-time resident of the Central Hotel apartments above El Rancho. He often proudly pro- claimed that he wasn’t a “bum,” working numerous jobs up and down Main Avenue. In a 2003 profile of him in the Telegraph, Beaver said, “I start work at 7 o’clock in the morning, until 10 o’clock. I work seven days a week. I can’t complain. I’m my own boss. I hire myself and fire myself.”

At the Buzz House, where I worked from 1998 until it closed in 2004, he would take the trash out for the wage of $3 and a day-old pastry. At Lady Falconburgh’s, he delivered bills to the post office and generally made himself useful. One of the more interesting duties he performed was posing for photographs every day for $1 for an entire year, pre-digital age, for Gary McVean, owner of Lanka Blue jewelry store. McVean was never able to actualize his idea for a 365-day Little Beaver calendar, but he still has the photos somewhere.

Janet Spear, former owner of Lady Falconburgh’s, was quite privy to Beav’s ways with money. He kept all his cash in his shoe, where she saw as much as a thousand dollars in there at a time. She tried to get him to get a safety de- posit box or a bank account, but he resisted. By most ac- counts, his largest investments were in personal adornments purchased at local western wear stores.

Little Beaver was perhaps best known for his private investigator business, “I Spy Private Eye and Associates.” With the help of his partners at Lady Falconburgh’s, he advertised through business cards, some of which can still be found in locals’ wallets. He would keep his eyes and ears open about town for various developments and tips in the solving of crimes. Once, when Buzz House owner Cindi Sheridan’s unhinged ex-boyfriend was severely defaming her at a local establishment, Beaver overheard it and quickly reported his findings to Sheridan. He was the type of person who most people would ignore but was always actively listening and watching.

His crowning moment came when the painting of Lady Falconburgh, defining symbol of that establishment, disappeared one night. He was hired to track it down, and on a tip, was able to recover it at a local antique shop (or under a tree at Lemon Reservoir, depending on who you ask). He triumphantly returned it to its proper place on the wall of the restaurant. Spear said it was the happiest she’d ever seen him.

When Beaver was happy, it was a wondrous thing. The smile that graced his face threatened to over-take his entire head. However, it would be a disservice to Little Beaver to not touch on the inner challenges he faced nearly every day. Those who witnessed his disquieting discourse heard him processing, in his own isolated way, deeper traumas. His explanations and proclamations could be baffling, yet so deep and mysterious as to have the makings of an ancient myth or a powerful dream. I believe he was quite intelligent, but his constant struggle for some narrative that would bring clarity to his existence overwhelmed him.

He benefited greatly from the open ears and hearts of the friends who saw him on a daily basis. As Beaver said in 2003, “(Doctors) say I’m not insane, I never was,” he says. “The only thing I’m suffering from is loneliness. So they told me to go out and find a friend to talk with, talk it out of my system, then I’ll be just fine.”

I had numerous hour-long talks with him at the Buzz House. In hindsight, I recognize that his struggles paralleled

my own search for narrative and identity amidst a sense of isolation, and he could very well have had an influence on my artwork. So many people besides myself heard Little Beaver expound on life, and though he may have felt lonely, he was loved and cared for by those with whom he regularly crossed paths. He interacted with so many of us, but for those who got to know him well, it was something more.

Broad emphatically states Beaver was more than just a Durango “character;” he was his genuine friend of 37 years who was a “character” only in the sense that each and every one of us are characters.

Toward the end of his life, Little Beaver was seldom seen – quietly living at the Four Corner’s Health Care nursing home, receiving few visitors due to visitation/privacy rules that left many of his old friends unaware he was there. His social life greatly diminished after his Main Avenue apartment burnt down in the 2006 fire that took out the whole fourth floor of the Central Hotel. He lost most of his possessions (including his prized wardrobe) in the conflagration and was left to move off Main and out of his routines. Some of his friends kept in contact with him, but he was mostly incognito for 11 years. Within the last few months, McVean happened to run into Little Beaver and said Beaver greeted him warmly, saying how his life was all right, but that he was tired of hanging around crazy old people all the time. Completely understandable for someone who was accustomed to the lucid world of day-to-day Main Avenue.

Little Beaver’s funeral occurred on the lovely spring after- noon of April 7 and was attended by upwards of 30 people. Numerous business owners, employees and regular customers at establishments he frequented, downtown workers and more attended. We shared stories, laughs and tears. He had no known family, so several friends volunteered to be pallbearers. He was buried with his wallet, private eye badge, investigation log, and his feathers.

On a final note, his death certificate needed to list an occupation: and of course, they put “Private Investigator.” 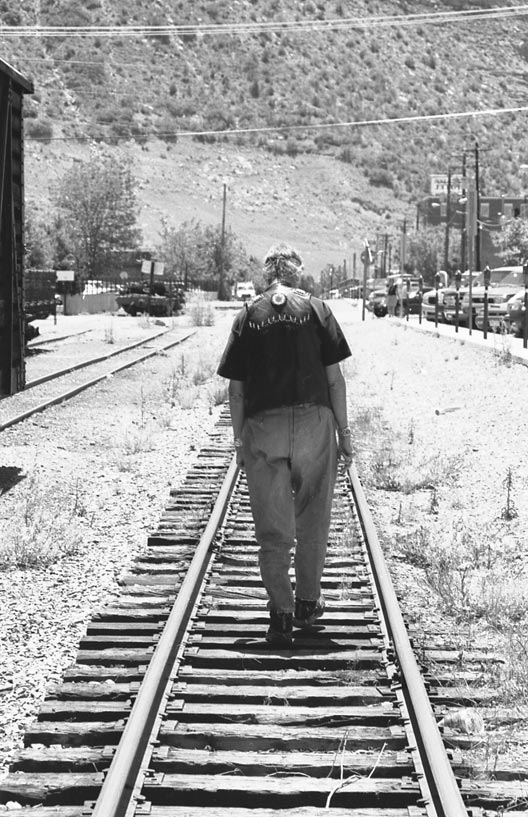 A place to rest his head 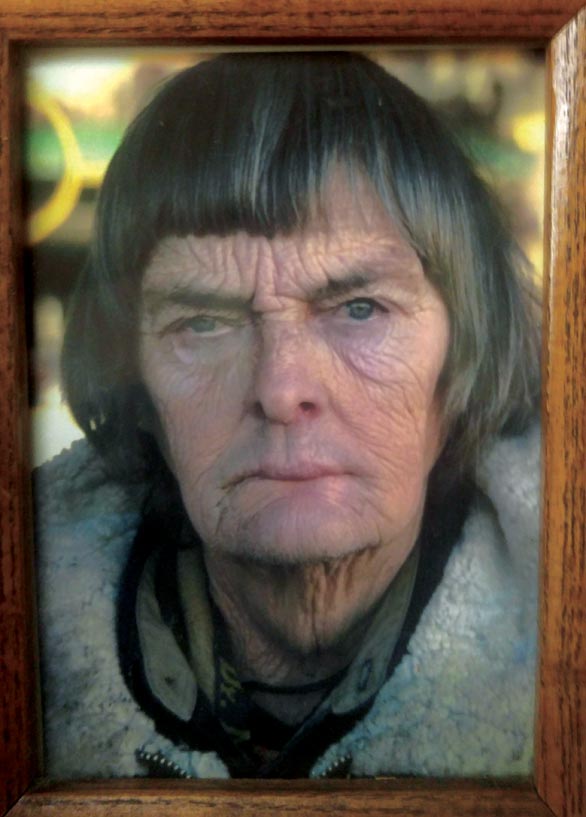 A framed photo of Little Beaver that hangs at the Durango Diner, one of his favorite haunts.

Upon his death, Little Beaver had enough to pay for a casket and burial, but he did not have enough to pay for his headstone. To help pay for Beaver’s grave marker, a GoFundMe site has been set up at https://www.gofundme.com/little-beaver-headstone-fund. In addition, local artists are planning a memorial exhibit in honor of Little Beaver. If interested in contributing art work, contact Dan Groth at warmgrimace@gmail.com.