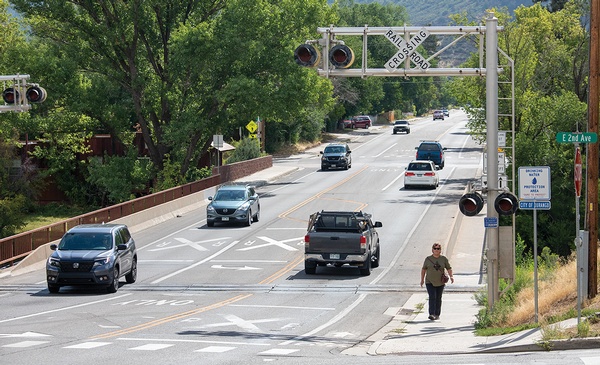 The 32nd Street bridge, pictured above, was the site for a proposed pedestrian bridge that would connect Memorial Park on the east side of the Animas River to Animas City Park on the western side. The proposed pathway would allow people to cross the Animas River, Durango & Silverton Narrow Gauge Railroad tracks and 32nd Street without having to walk next to or in front of vehicles on the roadway or trains on the tracks. The current setup is an at-grade crossing, which is one that is level with vehicles./File photo

The bridge is back. Years ago, city officials and residents debated the best way to get from Memorial Park on the northeastern end of the Animas River Trail, across 32nd Street, over the river and to Animas City Park, on the northwestern side. Today, that debate has resurfaced.

Back to the drawing board

It started at the Parks and Recreation Advisory Board during discussions about the 2020 budget, which was expected to include $3.4 million for construction of a pedestrian bridge at 32nd Street.

Board member Seth Furtney said he questioned whether the funds would be better spent on other projects – and, as it turned out, other members agreed with him.

He explained that it’s not about whether the bridge has merit or value, but, for him, what would have to be forfeited to get it built. “It doesn’t reflect the best value for the city’s investment,” he added.

Furtney mentioned several projects he would consider top priorities if the $3.4 million was freed up – an underpass at Camino del Rio, redevelopment of Santa Rita Park, and connecting Three Springs to the Animas River Trail.

He’s not the only one talking about Camino del Rio. Others have highlighted the current crosswalks as safety concerns, suggesting those could be the spots where funds are needed most – not at 32nd Street.

But, safety is also the guiding principle for those who want a pedestrian bridge at 32nd Street. Many remember a young girl who was killed while riding her bike along 32nd decades ago, and are not willing to take the chance it could happen again.

“They are both unsafe crossings, and both require serious attention,” Rich Hoehlein, chair of the Parks and Recreation Advisory Board, said. “I don’t think we have to choose.”

Almost a decade ago, city officials and staff started talking about extending the Animas River Trail to the north. One of the keys to making that happen was the acquisition of 44 acres off Animas View Drive, later dubbed Oxbow Park and Preserve, which the city purchased in 2012.

The next step was figuring out how to connect the river trail, which essentially ended at 32nd Street, to this new property. Over the years, neighbors and residents argued about pathways, property rights, bridges, beaches and more. The discussions were, at times, contentious and exhausting, and at others cordial and effective.

In the end, the City Council serving at that time chose to move forward with a specific plan for the northern extension of the Animas River Trail – one that included a pedestrian  bridge along 32nd Street.

The bridge would allow people to cross the Animas River, Durango & Silverton Narrow Gauge Railroad tracks and 32nd Street without having to walk next to or in front of vehicles or train cars.

In order to pay for it all, city officials reached out to Great Outdoors Colorado, or GOCO, a state organization tasked with taking proceeds from the Colorado Lottery and investing in parks, trails, wildlife, rivers and open spaces. Over the years, GOCO estimates it has invested $1.2 billion into projects across the state.

The City of Durango has been the recipient of several GOCO grants worth millions, including one for $1.3 million awarded in 2017 for the northern extension of the Animas River Trail.

Giving up the grant

According to city officials, the safety and connectivity of a pedestrian bridge along 32nd was one of the things GOCO liked about the plan and one of the reasons the grant was approved.

Now that the bridge is being debated again, staff and council members felt it was important to contact GOCO and find out exactly what the consequences would be if the city decided to scrap the project.

She said GOCO staff encouraged the city to delay the bridge project, instead of eliminating it. The city is expected to use the grant funds by September 2021, however, it could request an extension of up to a year.

If the decision is made to cut the bridge plan, the city could lose some of the $1.3 million in GOCO funds. Metz estimated about $500,000 of the total grant would have gone toward the bridge, so that could be the amount lost if the City Council decides not to build a pedestrian bridge.

It’s uncharted territory, though, because the city has always completed projects for which grant funds were requested. Once in the early 2000s, Metz said, officials looked at building a bridge over Goeglein Gulch Road and talked about seeking GOCO grants to fund the project.

But, the idea was soon scrapped and a grant application was never sent. “It’s never gone this far before,” she added. Currently, city staff is preparing another grant application for GOCO. This one would help pay for a swim beach at Lake

Nighthorse and is expected to be submitted in October. Hoehlein said he certainly would support a debate about priorities and whether or not a pedestrian bridge is the best place to put the city’s limited funding. But, at this point, the city has made commitments to GOCO and others. That’s a real concern.

“This project was approved by a prior Parks and Rec board,” he added. “I don’t like the potential of reneging on a contract.”

It’s not just about backtracking on the bridge, either. For Hoehlein, it could be a bellwether for future boards and councils. “I think it’s a bad precedent,” he added.

Where the funds go

At this point, City Council has directed staff to look into the projects on 32nd Street and Camino del Rio.

For Camino del Rio, the focus is a feasibility study. This would provide details about the cost of an overpass versus an underpass, what properties could be affected, potential impacts to traffic, and more. The hope is to complete it by year’s end.

For the pedestrian bridge at 32nd, the design process is also expected to be complete by the end of the year. The next step would be to solicit bids.

One thing everyone agrees upon is that getting bids could be a game-changer.

According to Metz, the Council will review proposed budgets and recommendations on capital improvement projects, like the 32nd Street bridge, on Oct. 8-9. Decisions would be made by Council following those meetings.

“Ultimately, the City Council will make this decision,” she added. 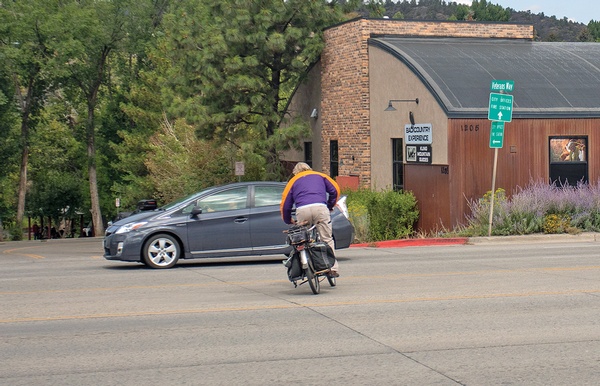 A rider quickly pedals across Camino del Rio from the east side near downtown Durango to the west side along the Animas River Trail. Nearby is the HAWK crossing, which features flashing lights to alert drivers. Camino del Rio and 32nd Street were found to be the top two most heavily used roads in a recent traffic survey./Photo by Stephen Eginoire