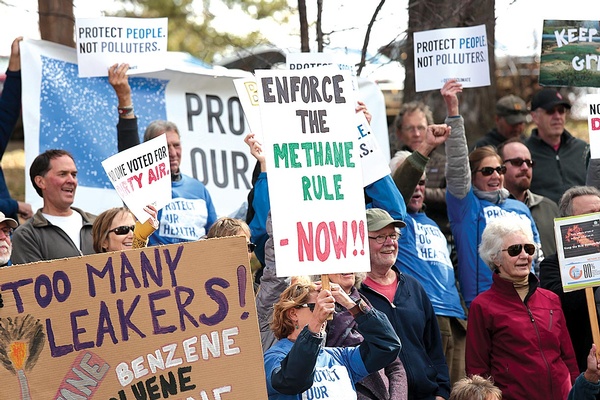 About 100 people gathered in Buckley Park on Monday to protest the Department of Interior's plan to delay the implementation of the BLM methane rule until January 2019./Photo by Jennaye Derge

The methane rule. The Master Leasing Plan. The coal moratorium. The sage-grouse agreement. In a report released Oct. 24, the U.S. Department of the Interior announced plans to put each of these items on the chopping block.

The report, titled “Review of the Department of the Interior Actions that Potentially Burden Domestic Energy,” lays out the case that many of the administrative actions taken by the Interior Department under former President Barack Obama resulted in burdensome regulations on the energy industry.

This aims to change all that.

By rescinding many of the rules, department officials can clear the way and allow private companies to tap the country’s energy reserves, specifically fossil fuels like oil, natural gas and coal. This is supposed to make the country less dependent on foreign energy resources, create jobs and boost economic growth, according to the report.

It lists seven specific orders from Interior Secretary Ryan Zinke that are intended to cut back regulations and drive domestic energy production. Those orders include delaying the methane rule, which put restrictions on venting and flaring of methane that occurs when tapping into natural gas, and scrapping the Master Leasing Plan, which directly affects the public’s ability to address oil and gas development in their communities.

It also suggests tossing sage-grouse protections, rescinding the moratorium on new coal leases, speeding up the oil and gas leasing process, and even allowing drilling in the National Petroleum Reserve in Alaska.

Of course, not everyone’s on board with this about face.

One of the most immediate concerns for some residents of Southwest Colorado is the methane rule.

Approved at the end of 2016, the rule placed restrictions on the venting and flaring of methane on BLM lands. The primary component of natural gas, methane is a potent greenhouse gas.

Support for the rule gained ground after NASA imagery discovered a methane hot spot hovering over the Four Corners in 2014.

With more than 35,000 oil and gas wells in the region, many people were already concerned about the release of methane, but no one knew how high the concentration was. It turns out, it’s the highest in the nation.

Following that revelation, Colorado enacted state regulations. But with the hot spot touching Utah, Arizona, New Mexico and Colorado, many believed federal rules were needed to truly address the issue. That was the purpose of the BLM rule.

The first attempt to knock the methane rule down came from Congress. In the end, however, the U.S. Senate failed to pass a bill that would have voided it. That’s when the Department of Interior stepped in, announcing in the Oct. 24 report plans to delay the rule for one year.

“(The delay) will provide industry additional time to plan for and engineer responsive infrastructure modifications that will comply with the regulation,” the report reads.

In response to the proposed delay, the San Juan Citizens Alliance and Conservation Colorado hosted a rally in Buckley Park on Mon., Nov. 6. About 100 people attended, showing their support for the rule and their desire to keep implementation on track for 2018.

“We have over our heads, right now, a methane cloud the size of the state of Delaware,” La Plata County Commissioner Gwen Lachelt said in a statement. “Through the BLM’s own studies, we know that each one of the tens of thousands of natural gas wells in our region are leaking methane.”

Another issue directly affecting Southwest Colorado is the Master Leasing Plan, or MLP. First ordered in 2010 by then-Interior Secretary Ken Salazar, the MLP is a guide for oil and gas development on sensitive public lands managed by the BLM. These plans can help identify and address potential conflicts, or even recognize and detail lease stipulations.

“(The Secretary’s order) would dismantle the MLP process,” Jimbo Buickerood, public lands coordinator for the San Juan Citizens Alliance, said. “That’s one of the pieces (of the report) that affects us most.”

Dismantling the Master Leasing Plan would force the BLM to rely on its Resource Management Plan, which offers a broader portrait of public lands. Buickerood explained it does not provide the detailed guidance and input an MLP would have.

Currently, thousands of acres of BLM land across La Plata and Montezuma counties are in limbo awaiting the federal agency to complete its Master Leasing Plan. But, with the MLP no longer required, that acreage could suddenly be eligible for the auction block.

Some of those acres are adjacent to Mesa Verde National Park and Phil’s World, out-side Cortez. Under the MLP, these two locations – considered essential to the area’s economic health – would have received extra care, guidance and protection.

Although not everyone supported the idea of a Master Leasing Plan, it did receive support from officials at Colorado Parks and Wildlife, La Plata County and Mesa Verde National Park.

Even before the Interior Department released its report Oct. 24, word was out that the Greater Sage-Grouse Conservation Plan could be scrapped.

The real issue many people had with rescinding the agreement was the work that had already gone into it. For years, elected leaders and other stakeholders across the West argued over the sage grouse, its importance and the impacts oil and gas development would have on the bird’s native habitat. Eventually, those stakeholders came to a compromise – which had bipartisan buy-in – with the sage-grouse agreement in 2015.

To suddenly abandon those efforts two years later, according to Lachelt, is a rejection of years of collaborative work from those stakeholders, whose efforts also prevented the sage-grouse from being listed under the Endangered Species Act.

“Eliminating these plans means that the Trump Administration does not take public input seriously,” Lachelt said in an email.

“And is promoting unfettered oil and gas and coal development threatening this iconic species.”

Lachelt, who is also the founder of the Durango-based Western Leaders Network, said 43 local and tribal officials from across the West have signed a letter expressing support for the sage-grouse plan.

The fast track for fossil fuels

Among the other orders coming down from Secretary Zinke is one encouraging energy development on the National Petroleum Reserve in northwest Alaska.

Although the report does not suggest drilling in the Arctic National Wildlife Refuge, it does open up the waters north of there to drilling. It also looks to reconsider acreage in the National Petroleum Reserve that has previously been closed to leasing. Currently, 11 million acres (or 48 percent) of the total 22.8 million acres in the National Petroleum Reserve are closed to leasing. But, that could change.

In addition to these changes, Secretary Zinke also plans to rescind the moratorium on new coal leases, which was enacted in 2016, and push for faster processing when it comes to oil and gas leases on public lands.

Buickerood said much of the report, from his perspective, suggests that if the process takes longer, it must be bad. But, he disagrees. “I don’t think it works that way,” he added.

When the public and local stakeholders are given a chance to speak up and say their piece, he said, everything can move forward. In the end, there is often less protest and less litigation.

Buickerood called the report a blueprint, laying the groundwork for the changes the Interior Department plans to make in the coming years.

He expects the first of those changes to come out in March. If the public isn’t pleased with the changes, however, there’s little that can be done. The orders – regardless of which administration they came from – are guidelines. They are administrative changes, not laws of the land. This leaves little room for protest. At least, not until the next election. 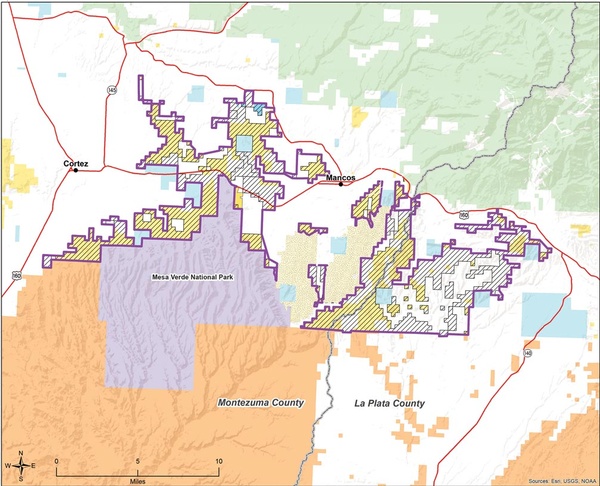 The shaded sections with a purple border are part of the BLM's Master Leasing Plan. Those areas would be open to oil and gas leasing if the the MLP process is scrapped by the Secretary of Interior Ryan Zinke./Courtesy photo