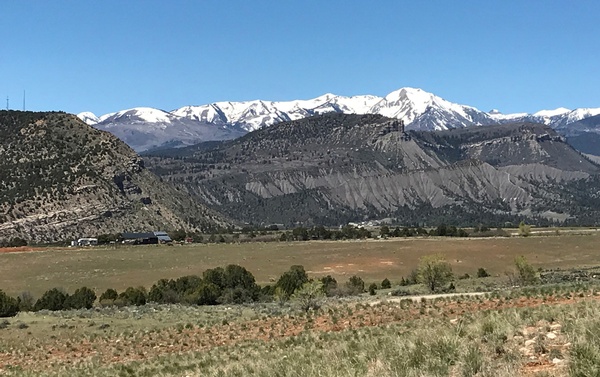 Durango Mesa Park sits atop what was once called Ewing Mesa, pictured above, overlooking the Animas River and Bodo Park./File photo

There is nothing else like it – not in the state, not in the country, not even in the world. It might be hard to believe, but the Durango community is on the precipice of creating something found nowhere else on the planet.

“It’s one of the most exciting projects I’ve worked on in my career,” Pedro Campos, project manager and lead architect with Avon-based Zehren and Associates, said. “This is an opportunity like none other.”

Located at the southern end of the city, the area dubbed Durango Mesa Park, formerly known as Ewing Mesa, over-looks the Animas River and Bodo Park. The property spans 1,850 acres, 800 of which would be developed.

Not only will this park be home to La Plata County’s future fairgrounds, it could support concerts, festivals, sports fields, a dog park, campgrounds, gardens, community spaces, and a biking and trail system so unique it’s equal can only be found halfway around the world.

Campos, who’s been involved with projects all over the world for more than 20 years, called the mesa “Durango’s Central Park” – but even that iconic spot in the heart of New York City could never support as many diverse outdoor experiences.

The plans for this one-of-kind vision will be presented at a meeting at 5 p.m. Thurs., May 3, at City Hall. Campos, along with representatives from Durango-based Russell Engineering, Trails 2000 and the city will be on hand to answer questions and, most importantly, get public feedback.

“It’s exciting to be working on something this unique,” Campos said. “This doesn’t happen every day.”

Layout of the land

The first piece of the puzzle was the Multi Event Center, which was spearheaded by the county last year and would be anchored by the new La Plata County Fairgrounds and its related facilities.

The center would be located in the middle of the mesa, taking up about 200 acres on an elongated kidney-like sec- tion of developable land overlooking Bodo Park.

The northern-most portion naturally lends itself to special events, concerts and festivals with designated campgrounds as well as dispersed camping. The idea is to allow this portion to develop organically. As events are hosted, promoters and organizers can create spaces specific to their needs and, essentially, discover the best spot for more permanent structures along the way.

Tucked between the festival space and the fairgrounds would be an area dedicated to culture and community.

According to those involved, what makes this project so unique and this opportunity so remarkable is that the property can support so many different uses. It’s as vast and varied as the people of La Plata County and Durango.

Mary Monroe Brown, executive director for Trails 2000, was tapped by the planning team for Durango Mesa Park. She said this community is not just a biking community, it’s an outdoors community. Whether it’s music, art, agriculture, hiking, biking or any other outdoor pursuit this community craves, there’s a space for it on the mesa, according to Brown.

“There’s space for all that to happen,” she added. “Something like this is less than once in a lifetime.”

The cultural and community area would celebrate the different users and become a hub where everyone can come together.

This idea first came about during the planning process for the Multi Event Center. The vision then was a community barn that could host special events, house a kitchen and other amenities, as well as act like a beacon and guide visitors to the center.

Campos said planners expanded on this idea with a cultural park that could include gardens, community art projects and more.

“We think it would be a nice way to create an anchor that would be a reason to visit the mesa, even if there’s nothing going on there,” he added.

The Southern side of the mesa would have several top uses. The area farthest south, which is also the flattest, would be home to a track and field complex and up to 12 soccer fields capable of hosting large tournaments. The south would also be home to a 5- to 6-acre dog park with open areas, agility courses and more.

The majority of the south, however, would be dedicated to a biking and trail system – the only comparison of which is on the other side the world.

Around the same time word was spreading that Mark Katz, founder of Mercury Payment Systems, and his family had purchased the 1,850 acres south of town, another local happened to be hanging out down under.

As a representative for bicycle company Trek, former Olympian and Mountain Bike Hall of Famer Travis Brown was in Canberra, Australia, for an event at Stromlo Forest Park. More than a decade ago, the area had been scorched by a devastating wildfire. When trying to decide what to do with the scarred lands, local leaders came up with the idea to create a park unlike any other.

Brown, who’s visited plenty of parks throughout his career, was impressed by Stromlo and called it a rare venue. “This one was special in a lot of ways,” he said. “Unlike other venues, this had so many other trail-centered resources.”

According to Brown, Durango Mesa Park has a similar landscape with open space, flat areas and existing trail networks. It has the potential to accommodate the same types of trails, as well as others like Nordic skiing.

Much like Stromlo, the trail system on the mesa would not only be a place to host events and competitions, but it would serve as a training ground for area athletes.

According to Monroe Brown, Durango has more Olympians, and national and world champions per capita than any town in the U.S. The mesa could be the place where the next generation hones their skills.

“This would become one of the premier cycling and training facilities in the United States,” Campos said.

According to city officials, specific construction projects would be built in phases. Other parts would come organically, like the concert and festival portion.

Parks and Recreation Director Cathy Metz said the city also wants to make sure they come up with a plan they can afford.

Metz will be on hand at Thursday’s meeting, along with Campos and others, to present the plan and get feedback. It’s the second one addressing the northern and

southern sections of the mesa. The first, held earlier this month, dealt with the history of the land and the owner’s overall vision. At this meeting, the public will get more details.

Campos said there’s lots more work to do, including assessing costs and developing a strategy for development.

The next step is to take the plan – after incorporating

public feedback – to the Durango City Council on May 22. City officials and the community will get additional opportunities to comment before the Council is expected to approve the official version, which will likely happen by the end of June or early July.

“It opens up a door that we’ve just never had open before,” Metz said. 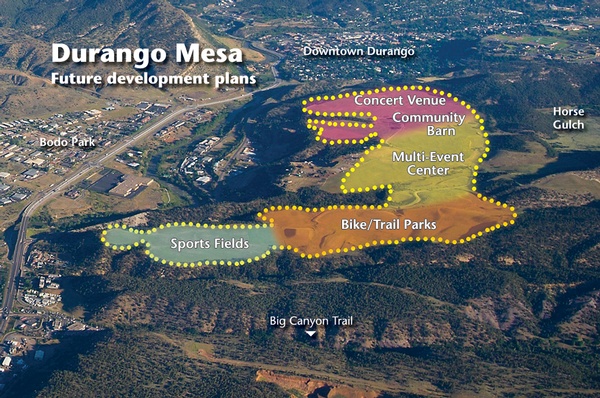 At the southern end of the city, the area called Durango Mesa Park, formerly known as Ewing Mesa, spans 1,850 acres, 800 of which would be developed into the park, highlighted above./Photo Illustration by Missy Votel