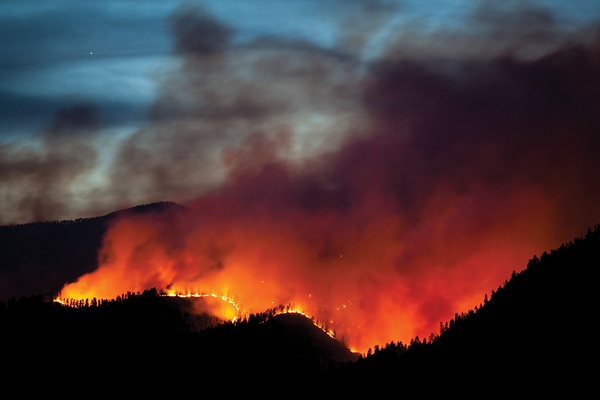 The active front of the 416 Fire burning north of Durango in 2018. The fire served as an urgent reminder to local authorities and residents that fire could soon be at Durango's door. A concerted effort has begun in recent months to thin and reduce fuels in Durango's wildland-urban interface./ File photo by Stephen Eginoire

The reality of wildfire risk is about to arrive at Durango’s doorstep. Next spring, the Bureau of Land Management plans to set a prescribed fire, seen as one of the most effective tactics in reducing the threat of larger, catastrophic wildfires, on 700-acres atop Animas City Mountain, just on the northern edge of Durango. Once lit, the display of flames and smoke is likely to drive home just how vulnerable Durango and outlying homes are to wildfires.

“It’s going to be a show,” Ian Barrett, fire management specialist for the BLM, said. “Even as someone who works in fire management, it’s a daunting burn.”

But the controlled fire also will serve as a signal to this enclave of Southwest Colorado that efforts are in full force to build buffer zones and protections around Durango – a response to the reality of living and developing in a landscape that has naturally evolved with fire.

And the work could not come at a more pressing time. Years of suppressing fires have led to overgrown forests, and a multi-year drought driven by climate change has dried the landscape out; the forests are ready to burn. To complicate matters, development continues to encroach ever farther into these wild areas, putting at risk hundreds of homes and human life.

In La Plata County, around 53,800 people – about 97% of the total population live in this cross section where humans have developed in forests, known as the wildland-urban interface, according to a Colorado State Forest Service study.

“We’re building full neighborhoods in those wildland areas,” Durango Fire Chief Hal Doughty said. “And the truth of the matter is, we have so much potential for fire to impact those homes.”

As Chief Doughty was heading to a briefing early one morning in June 2018 with the 416 Fire raging north of Durango, he was stunned to learn winds had shifted the fire south. Initially expected to burn north, farther into national forest land, the 416 Fire instead looked as if it could reach Durango by roaring down Junction Creek or Animas City Mountain.

“I was blown away because that wasn’t the movement we were expecting,” Doughty said. “So we started talking about evacuating nursing homes and all the houses in that area. And we starting thinking, ‘Where else can it go if it gets there?’ Those were all huge considerations for us.”

The 416 Fire broke out at a time of extreme drought and rapidly spread, sending billows of smoke into town. Homes in the county were evacuated, businesses shut down and hundreds of firefighters converged on the region to battle the blaze.

Ultimately, several forces kept the 416 Fire at bay. Firefighters lit back burns, when a sliver of forest is intentionally set on fire so an active wildfire runs into an area already burned. Also, a major factor, Doughty said, were areas previously mitigated for fire, like the Falls Creek subdivision, where residents worked for years to thin and remove fuels. In the end, the fire was knocked out by a tropical storm, but not before burning 54,000 acres.

Then and now, the 416 Fire has acted as a forewarning that left a lasting impression on fire managers and the community, Doughty said. For the first time in recent memory, likely since the Missionary Ridge Fire in 2002 and to a lesser extent the Lightner Creek Fire in 2017, a wildfire was on the brink of reaching town limits.

“We’ve always known fires are possible,” Doughty said. “But I think the public is now recognizing how serious the threat is. We need to make changes now to prevent the next wild land fire from getting into town.”

To understand how different agencies are working to fortify Durango against future wildfires, it’s perhaps best to start inward and work out. And in the immediate vicinity, the two major landowners are the city of Durango and the BLM.

Typically, two strategies are used to reduce the threat of wildfires: thinning projects to remove trees and vegetation; or prescribed burns, which replicate natural fires and burn at a lower severity.

With homes so close to forests, Amy Schwarzbach, the city’s natural resource manager, said thinning projects are what’s preferred around town. Recently, crews removed vegetation around high-risk areas, like Dalla Mountain Park and Twin Buttes, and just last summer, along the Powerline Trail near SkyRidge. The City of Durango and La Plata County are exploring ways to secure more funding for these types of projects.

“The momentum is picking up … and is happening at a landscape sale,” Schwarzbach said. “And that’s what’s really going to make a difference.”

But local government can only do so much, Doughty said. There’s also a responsibility on homeowners to fortify their homes, whether by thinning trees or removing flammable structures, like wood decks. Even just a small fire can break out and quickly consume a couple of homes in a neighborhood, which would be a tragedy in itself.

“There are so many opportunities in our community for fires to break out, and if we haven’t mitigated before that day, we’re playing defense from the minute the fire starts,” Doughty said.

Increasingly, wildfire threat is being looked at on a landscape-wide scale, rather than separate agencies working in a vacuum.

For one, there’s the Rocky Mountain Restoration Initiative, an ambitious, collaborative project that seeks to treat more than 300,000 acres of private and public land across Southwest Colorado. “We’re looking at the problem collectively as a whole, and recognizing there is not one silver bullet,” Jason Lawhon, who works for the RMRI for the San Juan National Forest, said. “None of us have the resources individually to do the scale of work that would be needed across the entire landscape.”

Finding the funding and resources for fire mitigation has always been a challenge, according to the agencies interviewed for this story. But as the impacts of wildfire have increasingly entered the public eye – like smoke from burns in California choking the East Coast – its been easier for Western agencies to plead their case for more funding. Recently, Sen. Michael Bennet proposed a bill, the Outdoor Restoration Partnership Act, which would invest $60 billion in forests and watersheds, with much of that money going directly to local and state efforts.

“Forests and watersheds are essential infrastructure that sustains our economy and way of life in Colorado, but for too long, Congress has failed to meaningfully invest in them,” Bennet said in a statement.

For the Forest Service’s part, which manages much of the vast San Juans that serve as Durango’s back yard, major projects are in the works, like a prescribed fire in Junction Creek and up Florida Road, around the Edgemont and Tween Lakes subdivisions.

“The projects we did 10-15 years ago were much smaller,” James Simino, Columbine District ranger, said. “But it’s not been a huge landscape transformation, which from a fire threat perspective, we’re trying to design now.”

With climate change driving drought and catastrophic wildfires, communities across the West have realized the time is now to adapt and become more resilient to the reality, and inevitably, that fires will burn, and likely at an intensity not seen in the past. Three of Colorado’s largest fires in history, for instance, all happened in 2020.

But even with unlimited funding for mitigation projects, communities in the West must come to terms with the inherent risk of living in an arid landscape exacerbated by climate change, Julie Korb, a fire ecologist and Forest Lewis College professor, said. “We need to expect the unexpected,” she said. “Because it’s not if, it’s a matter of when. This is something that will happen in your lifetime.”

Every semester, Korb shows her students a documentary about the 2018 Camp Fire, which was California’s deadliest and destructive wildfire in history. In just a short time, as people were getting ready for school and commuting to work, the fire consumed entire towns. Korb thinks, “What if that happened in Durango?

“Are we prepared for that?” she said. “Because it just takes one spark. That’s what we need to realize.”

The BLM, for its part, said it has evaluated nearly 6,000 acres in La Plata County that could be treated. By far, the most ambitious project is the burn atop Animas City Mountain, seen as a gateway between Durango and the surrounding forest. Conditions will need to perfectly align for the prescribed fire, but Barrett said if all goes well, the burn will likely take two to three days, with on-the-ground resources at the ready.

“We want to make this community as resilient to fire as we can,” Barrett said. “Because the kind of fires we see in this day and age, don’t stop at forests, they easily burn into communities.” 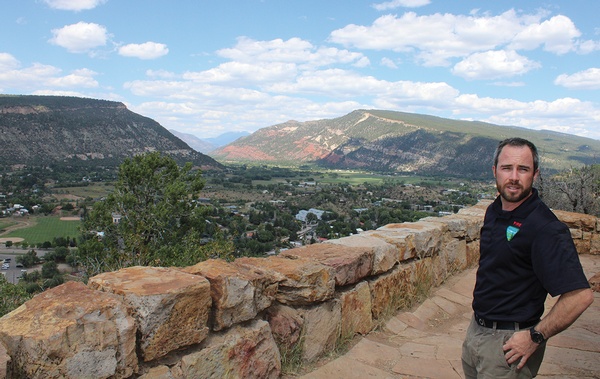 Ian Barrett, fire management specialist for the BLM, said there will be a prescribed burn atop Animas City Mountain, north of Durango./ Photo by Jonathan Romeo