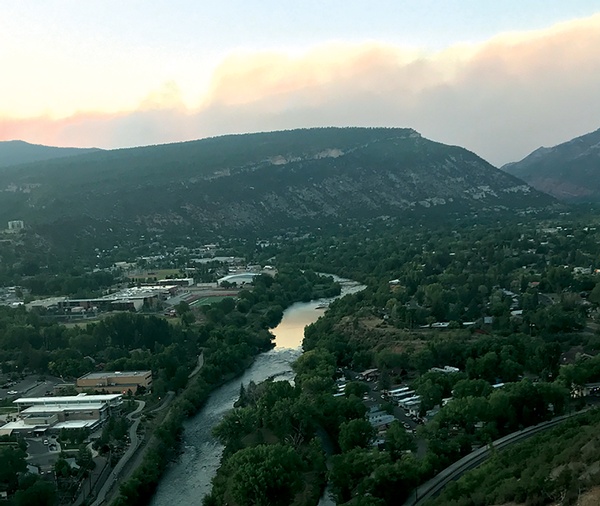 The Animas River flows through Durango while the 416 Fire billows in the distance. The 2015 Colorado Water Plan lays out a framework for conserving the state's precious resource in the face of increasing drought, climate change and population growth./ Photo by Missy Votel

Colorado’s population is expected to double, from about 6 million to over 10 million people in the next 30 years. In that time, growth, combined with drought and climate change, could result in a water shortage equivalent to 1.5 million households by 2060.

“The plan is a road map on how we can work to save water and reduce consumption before a crisis occurs,” Nathan Goodman, the Southwest Field Organizer for Conservation Colorado, said.

Conservation Colorado, which has offices across the state to help organize citizen activism and engagement, will be hosting “Securing Our Water Future,” from 6 – 8 p.m., Thurs., Jan. 23, at 4Corners Riversports. The goal of the event is to discuss what local residents and businesses can do to help curb water usage, build drought resilience and support the goals of the water plan. The meeting will be held in partnership with local members of the Colorado Outdoor Business Alliance, which has 40 members in Southwest Colorado. In addition to free food and drinks, the evening will include an expert panel: Celene Hawkins, of the Nature Conservancy and Colorado Water Conservation Board; Marcie Bidwell, from the Mountain Studies Institute; and a representative from the Ute Mountain Ute Tribe.

“The point is not to shame people for their water use,” Goodman said. “Instead, we will present more efficient irrigation strategies and programs.” Goodman said the biggest hurdle to implementing the state’s water plan right now is money. It’s estimated that putting the plan into action will require $100 million a year – which might seem like a lot but is a  mere drop in the bucket compared to the state’s other budget items, he said. State legislators are currently looking at adding $10 million to next year’s budget toward the plan, and the recently passed Proposition DD, which legalized sports betting, will add about another $10 million a year (that number will be significantly less in its first year of implementation).

Goodman said he hopes next week’s meeting, in addition to providing a dialogue, will spur local citizens to get active and encourage their representatives to fund the water plan.

“This is a good starting point, our legislators need to know this matters to us and to make it a reality,” he said. “As great as the water plan is, if we don’t have money behind it, we won’t see results.”

What: “Securing Our Water Future: What’s Next for the Colorado Water Plan?” Who: Hosted by Conservation Colorado
When: 6 - 8 p.m., Thurs., Jan. 23
Where: 4Corners Riversports
What else: Food and drink provided