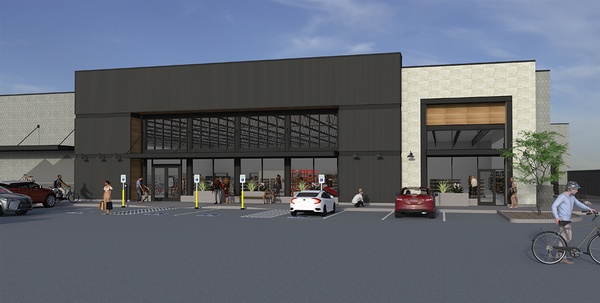 An artist's rendering of a new "unnamed sporting goods retailer" to be located on 2 acres in Bodo. Although the identity has yet to be revealed, the agent for the project submitted to the City is a listed representative for outdoor juggernaut REI.

Well, it appears the day has arrived – it looks like REI is coming to Durango.

On Wednesday, an item on the City of Durango’s Design Review Board agenda included a proposal for an “unnamed sporting goods retailer” to be located on 2 acres of vacant land in Bodo Industrial Park.

Because the project is in the “early design guidance” stage, during which a developer asks the city for initial feedback on the concept of a project, they are not required to disclose the actual business, said Scott Shine, the City of Durango’s Community Development Director.

“They’ve asked to stay anonymous,” Shine said. “I can’t state why they’d want to do that – maybe they haven’t closed on the site yet or just want to make sure they move forward before an announcement.”

However, the agent for the project – Jack Breard with Segovia Partners, based out of Dallas – is a listed representative for REI, according to the company’s website. Breard did not return emails and calls asking for comment.

What’s more, design plans for the building submitted to the city resemble most of the nearly 200 REI locations across the U.S.

“While the retailer is unnamed, the building elevations do appear to reflect a corporate design,” city documents state.

Tim Walsworth, the director of the Durango Business Improvement District, said he has heard the project is spearheaded by REI.

“It’s not surprising, in some ways, a chain like that would think about our community because of our love of all things outdoors,” he said. “While it’s not technically confirmed that REI is coming here, people can put two and two together.”

In an email to The Durango Telegraph on Tuesday, an REI spokeswoman said she had “no news regarding a Durango store.” When sent follow up questions about specifics of the plan submitted to the City of Durango, the spokeswoman did not respond.

Calls to the project’s other listed representative, Daniel Zimmerman with Hillside Architecture, were not returned. The land in question, on the corner of Turner Drive and La Posta Road, is owned by “Mapel CO of Durango,” which is associated with Durango Coca-Cola Co. Calls to Meredith Mapel, president and CEO, were also not returned.

Shine noted the unnamed sporting goods store is under contract to buy the property.

Regardless, at risk of setting the understatement of the year just two weeks into 2023: Durango is an outdoors town, which has allowed several local outdoor recreation- and retail-focused shops to thrive over the years. In some ways, it was only a matter of time until REI found this nook in Southwest Colorado.

Concerned about the impacts to local businesses, Walsworth emailed retailers to give them a heads up that some serious competition may be coming. The Telegraph’s calls to the owners of Pine Needle Mountaineering, Backcountry Experience, Gardenswartz and Durango Outdoor Exchange were not returned for this story.

“It is a concern to locally owned businesses when a big competitor comes in with stronger buying power and name recognition,” Walsworth said. “It’s hard to compete with that.”

Brett Sublett, owner of Durango Running Co., said given the volume of goods REI purchases, the retail chain receives better margins that local businesses can’t possibly match. Other amenities the retailer offers, like a generous returns policy and co-op dividends, also are difficult for smaller businesses to compete with.

Even more concerning, Sublett said, is that REI’s presence will not just impact outdoor gear stores. It will also be felt at cycleries, angling shops and other businesses, including his own, which sells running shoes.

“It’s disappointing,” he said. “I don’t know REI’s business plan, but I don’t know any towns this size that have an REI. But they must know something I don’t.”

Indeed, it’s hard to find a comparable town the size of Durango with an REI, and the company’s website does not list parameters for building a new location. Recently, an REI opened in Glenwood Springs, but that’s along I-70 with far more traffic.

That Durango may be REI’s newest location is perhaps a testament to the incredible population growth and expansion of the town since the COVID-19 pandemic drew urban dwellers into mountain communities.

While REI may be the latest major chain to seemingly change the character of town, the situation is not unprecedented. Ask any longtime local, and they’ll tell you there were major fights when Walmart moved into town. And again with Home Depot. And again with Starbucks.

Despite these chains, Durango still boasts a handful of local hardware stores and a cornucopia of independent coffee shops. Though, admittedly, the situation may be a little more nuanced with niche outdoor gear. And there’s no denying local businesses have suffered at the hands of mega-chains like Walmart.

“It’s not apples to apples,” Walsworth said. “But we are super unique in our little town where small business does drive our economy.”

However, there may be a few silver linings with REI’s arrival, said Jack Llewellyn, director of the Durango Chamber of Commerce. When chains move in, local shops are often forced to up their game and customer service. Consumers, too, have more competitive pricing options and are more likely to visit the local chain rather than shop online.

“It provides an opportunity for people to do a lot more local shopping as well as be able to price compare,” he said.

“I learned over the years that it doesn’t do any good to get uptight about competition,” Corra said. “People get worried, but if you’re doing a decent job, competition only helps.”

And, it’s not like REI is necessarily one of the evil corporate chains (like some others that come to mind). Instead, the company has a reputation for paying its employees good wages and benefits, giving back to communities and being environmentally conscious.

According to its website, REI invests 70% of its profits into the outdoor community, including 400 nonprofits. It sources 100% renewable energy for all its locations and has incorporated sustainable designs into its new locations. And, a recent outside survey found 96% of employees were happy working there.

Still, this doesn’t detract from the fact the arrival of REI marks a change for Durango, and may make things a little tougher for the local shops we’ve grown to know and love, which also have a great history of community service.

“BID will continue to push the ‘shop local’ message,” Walsworth said. “No matter how enticing that shiny new store might end up being.”

For now, after the Design Review Board’s early design guidance Wednesday, the developer will take their suggestions and come back for final approval from the board. As it stands, the project proposes a 22,000-square-foot building on 2.3 acres, with the Coca-Cola facility and Homewood Suites by Hilton to the north, and Morehart Murphy Auto Center to the south.

Assuming all goes according to plan, the project will go before the Planning Commission for final approval, possibly some time in the spring. It will not go before the Durango City Council, unless there is some type of variance or other unique aspect of the project, Shine said.