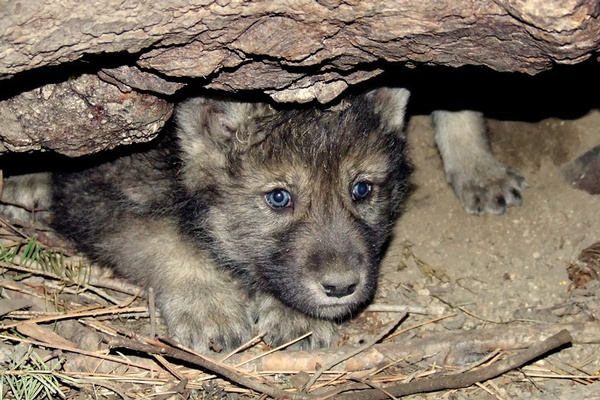 Colorado biologists say they have recorded multiple sightings of wolf pups born in northern Colorado. Note that, while this is a gray wolf pup, it is not one of the recent pups sighted./ Photo courtesy U.S. Fish and Wildlife Service

It’s the “pup”-date Colorado wolf watchers have been waiting for.  Colorado Parks and Wildlife on June 9 confirmed that a litter of gray wolf pups is living in the state. The announcement marks the first evidence of wolf breeding in Colorado since the 1940s, when trappers and hunters eradicated the species with the support of the federal government.

According to an agency news release, a state biologist and district wildlife manager observed multiple pups with a pair of adult wolves, known as M2101 and F1084. Other agency staff members have recorded three separate observations between June 4-8.

In each case, the biologists recorded the two adult wolves with three pups, but the wildlife agency has not ruled out the possibility of more animals. A typical wolf litter consists of four to six pups.

The emergence of the animals comes less than a year after voters narrowly passed a state ballot initiative to reintroduce wolves to western Colorado. Colorado Parks and Wildlife has until the end of 2023 to formulate and begin implementing a plan to reintroduce the wolves.

Hunters and ranchers have opposed the effort, in part due to the possibility of wolves returning to the state without human help.

Gov. Jared Polis appeared to anticipate the new pups could bolster the argument. In a statement, he said reintroduction will help ensure “these pups will have plenty of potential mates when they grow up to start their own families.”

State wildlife officials began to suspect the possibility of a wolf litter months ago. The first hint came from the location data from collars attached to the two adult wolves. State biologists had assumed both of the animals were male, but the tracking collars suggested one of the wolves had retreated to a den in Jackson County.

Colorado Parks and Wildlife spokeswoman Rebecca Ferrell said biologists contacted their counterparts in Wyoming, who had first collared the wolf after it was born to the Snake River Pack near Yellowstone National Park. Existing genetic information revealed a documentation error. The wolf was, in fact, female, not male.

Polis dubbed the animals “John” and “Jane” wolf and welcomed the pair to Colorado.

State wildlife biologist Libbie Miller said the agency will continue to monitor the den site at a safe distance. Studies have shown exposure to human activity reduces the chance of survival for the pups. So far, state biologists said all observations occurred from a distance of 2 miles in low-light conditions at dusk and dawn.

“Our hope is that we will eventually have photos to document this momentous occasion in Colorado's incredible and diverse wildlife history, but not bothering them remains a paramount concern,” Miller said.

Colorado Parks and Wildlife is also working with nearby landowners to minimize any potential conflict. It’s also warning the public of existing protections on gray wolves, which remain an endangered species under state law. Killing one can result in a $100,000 fine and up to a year in prison.

For more from Colorado Public Radio, go to: www.cpr.org