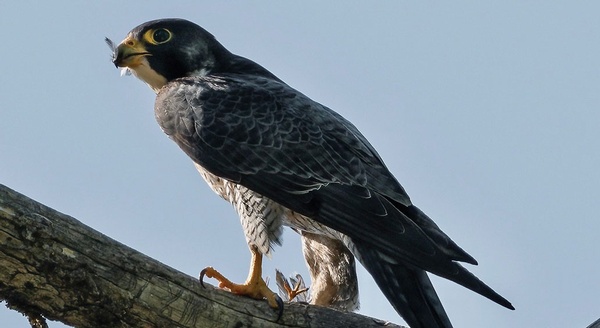 Peregrine falcon were once on the brink of extinction but have since recovered. Now, protections are in place to help the bird survive. This peregrine, photographed near Purgatory, seems to be having a little meal./ Photo by Anne-Marie Ferretti Mee

Although trail closures to safeguard winter habitat for big game such as elk and deer have lifted, there are still two areas off limits to recreation around Durango to protect peregrine falcon during mating season.

For years, areas around Perins Peak State Wildlife Area, just west of Durango, have remained closed until July 31 as the iconic falcon nests, rears its young and heads off for greener pastures.

But a new area was added in 2019 on Animas City Mountain, northwest of Durango. The Bureau of Land Management just put up signs about the closure, which may have come as a surprise to anyone hoping to hike or bike to the top of the mountain.

“The closures are specific trails where we know peregrine falcon are,” Nate West, a wildlife biologist for BLM, said. “There’s still a whole lot of real estate out there where people can go recreate.”

Peregrine falcon were pushed to the brink of extinction because of, well, humans making poor choices, like using toxic pesticides. However, human efforts to save the species have been a conservation success story. But that work’s not done, especially as new threats emerge (a peregrine falcon in Nebraska just died and tested positive for avian flu, as just one example).

One tool agencies across the country use is land closures to give peregrines the best chance at reproducing. But that takes cooperation from the public, even if that means giving up your favorite mountain overlook for a couple months out of the year.

“Recreation definitely has an impact,” West said. “And it’s still important to manage this species, so they don’t go back on (the Endangered Species List).”

One goal in mind

It might be helpful to explain why Perins Peak and Animas City Mountain even exist at all as public lands that we can enjoy.

Up until the 1970s, most of Perins Peak and Animas City Mountain were privately owned. The BLM and Colorado Parks and Wildlife (then the Division of Wildlife), however, identified those lands as important winter ranges for elk and deer, as well as nesting peregrine falcons.

As a result, the Nature Conservancy ended up purchasing the properties and transferring them to BLM and CPW control with one goal in mind: the conservation and protection of wildlife and habitat.

Motorized use was banned from the outset, but other forms of recreation were allowed as a sort of cherry on top, with the caveat these lands would be closed at specific times for wildlife. (In 2015, the BLM banned mountain biking in Perins Peak after the rise in popularity in the sport put new pressures on the land, though biking is allowed on Animas City Mountain).

Much has been written and debated about recreation’s impact on wildlife – a Forest Service study published in 2018, for instance, found elk fled more than 3,000 ft. when a mountain bike approached, compared with just 1,640 to 2,460 ft. when a person walked by or passed on horseback.

Back from the brink

Peregrine falcon populations crashed in the 1950s-70s, mostly because of DDT –the poisonous insecticide farmers in the U.S. spread on crops for insect control.

Predatory birds were especially vulnerable, poisoned after eating smaller animals low on the food chain. After ingesting the poison, DDT thinned the bird’s eggs, killing their embryos. As a result, peregrine falcons were dangerously close to extinction and declared an Endangered Species in 1970.

In 1972, however, the Environmental Protection Agency banned the use of DDT, and conservation efforts began in earnest. By 1999, the peregrine falcon had recovered so well it was removed from the Endangered Species List.

The falcon, though, is still considered a “species of concern,” which is why land management agencies across the U.S. take measures, such as closing nesting areas, to help maintain the bird’s recovery.

Peregrine falcons are extremely particular about where they nest, choosing only cliff bands that meet specific conditions. On top of that, the bird is territorial, which means one suitable area can only sustain one pair of breeding birds. Keeping those areas undisturbed during breeding season is vitally important, said Steve McClung, CPW assistant wildlife manager. On top of all this, they have a limited window for courtship. “So if you lose a nest, you don’t get a do-over,” he said. “That’s why it’s a good thing we give them space and time to make sure the species can continue its recovery process.”

Wildlife managers know the cliff bands protected at Perins Peak and Animas City Mountain are actively being used by peregrine falcons, which typically return to the same spot every spring to breed. CPW guidelines require a half-mile boundary from nests, and the agency tries its best to use natural features on the landscapes to block off closed zones.

“If people come too close while recreating, it may cause (the birds) to abandon a nest, and that’s what we don’t want,” McClung said.

Whereas Perins has been closed for years for a nesting pair of birds, it wasn’t until the BLM updated its travel management plan in 2019 that a nesting pair was discovered on the upper north end of Animas City Mountain, resulting in that new closure.

And, while the pair at Perins Peak has been productive, fledging young every year, the couple at Animas City Mountain hasn’t had any chicks in the past few years, West said.

So yes, a few miles of trails are closed a little longer in the year to help peregrine falcon out, but there are still plenty of areas to ride or hike. And maybe, once the Animas City Mountain pair starts rearing some chicks (called “eayses”), we can start writing stories about the family like Oregon’s The South Bend Times, which covers a nest in town like an episode of “Jersey Shore.”

Seriously, check out this amazing headline: “Mystery unfolds in South Bend falcon nest: A new beau and a female intruder” written in March after a new male bird moved in after the previous male bird disappeared. The new male and the female were getting along just fine, until an unknown female – the “intruder” – showed up on scene, causing all kinds of clashes.

“Females can fight for hours, trying to see which one can claim control of a nest,” according to the report. “They will fight to the death, unfortunately.”

This is the kind of drama we could look forward to if we respect the closure. Let’s get this done.