Outstanding waters
At a time when water in the Southwest is becoming increasingly scarce, more than 20 streams in the region are being proposed for protective safeguards in an attempt to preserve the waterways for years to come. 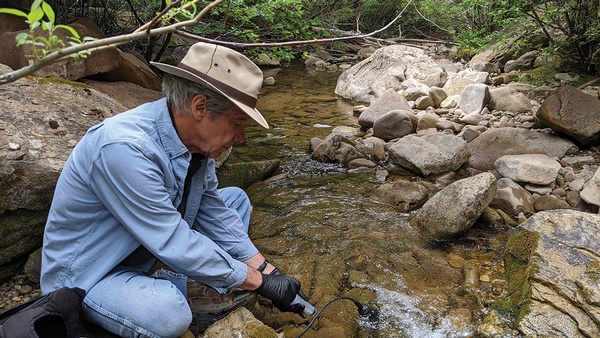 Raymond Rose tests the waters of Priest Creek, a tributary of the Dolores River and one of the proposed Outstanding Waters streams./ Photo by Duncan Rose

At a time when water in the Southwest is becoming increasingly scarce, more than 20 streams in the region are being proposed for protective safeguards in an attempt to preserve the waterways for years to come.

For the past two decades, a prolonged drought driven by climate change has snowpack levels in the Southwest on a continual downward trend. Obviously, that’s not good – less snow means less runoff for rivers and streams, and less water available for use.

As a result, a few years ago, a coalition of environmental groups started a process to locate and identify streams in the high country of Southwest Colorado that would qualify as Outstanding Waters (OW). The designation protects defined reaches of rivers, streams and lakes that have exceptional water quality.

The thinking, environmental groups say, is saving these pristine high-alpine streams in the face of climate change and worsening drought will ensure the long-term protection of tributaries that are vital for the region’s most important rivers, such as the Animas, Dolores, Gunnison, San Juan and San Miguel – which all feed into the Colorado River.

“Right now, this water is perfect, and we’d like to keep it that way,” Marcel Gaztambide, the Animas Riverkeeper for San Juan Citizens Alliance, said. “(OW) doesn’t stop future development, but it does establish water quality baselines that can influence decisions on management in these watersheds.”

The Outstanding Waters designation was established as part of the Clean Water Act of 1972. For streams to qualify, they must meet a set of criteria based on water quality and national resource values. And, the streams also must serve as critical habitat for aquatic life and have a component of recreational value, such as fishing or river running. Once designated, the water quality in those streams must be maintained and protected from any future development or use.

The Clean Water Act, however, left it up to states to create a process and specific criteria for streams to qualify as OW. In Colorado, that job falls to the Colorado Department of Public Health and Environment. “We protect every stream in Colorado, but this is the highest level of protection,” Blake Beyea, a water standards unit manager with CDPHE, said. “And it needs to be supported by water quality data, as well as evidence it’s an outstanding resource that requires protections.”

While the designation is somewhat seldom used, as of February 2020, Colorado had an estimated 78 stream segments and bodies of water, covering 5,869 river miles, classified as OWs, mostly located within wilderness areas and national parks. The environmental groups’ proposal – which includes SJCA, Trout Unlimited, American Rivers and Pew Charitable Trusts, among others – would be unique in terms of the amount of streams proposed and the fact the waterways are located outside wilderness areas, mostly on Forest Service lands.

“We’re really struggling with droughts and fires and development and over allocations,” Mike Fiebig, the director of director of American River's Southwest River Protection Program, said. “And the great thing about an OW designation is that we’re identifying really special, important rivers that already exist, and committing to keeping them that way.”

Back in 2019, the environmental groups started conversations on what streams might qualify as OWs. They looked at maps for high-altitude waterways that showed the potential for pristine water quality and impeccable habitat for aquatic life, while also escaping historical impacts from uses like mining and development over the years.

In all, nearly 30 streams emerged as potential OW candidates. Then, the next step was to prove it with on-the-ground water testing, an effort led by the Durango-based Mountain Studies Institute. That process lasted two years, with samples taken four times a year from each stream. In the end, the environmental groups ultimately proposed 26 stream segments (five in the Animas; nine in Dolores; seven in Gunnison; three in San Juan; and two in San Miguel).

An OW designation does not affect water rights and would not prohibit future development in these watersheds, Gaztambide said. It would, however, establish a baseline of water quality that cannot be impacted or degraded in the face of that development. And in some circumstances, it’s not just development; the waterways are also protected from things like an increase in recreation, which can result in elevated levels of E. coli.

Essentially, uses and development can change on the landscape; the existing, high-level water quality standards cannot.

“All the waters we’re proposing are above and beyond the standards (for an OW designation),” Gaztambide said. “And that’s the idea behind it. Without the data we collected, there’d be no baseline to judge future degradation.”

Gaztambide and the environmental groups are optimistic all the streams they’ve proposed will attain the OW designation. And indeed, there doesn’t seem to be much pushback from other water users in the region, such as agriculture and water districts.

Steve Wolff, manager of the Southwestern Water Conservation District, which represents nine counties in Southwest Colorado, said it’s unlikely the district’s board will take a stance either way for the OW designation. To date, the board has just monitored and asked questions about any possible unintended consequences the listing may have.

One potential concern, Wolff said, is what outside impacts and degradation, like rising water temperatures driven by climate change, would have on the designation and the requirement to maintain those standards. “If that happens, what does that mean from a regulatory aspect?” Wolff said. “We really don’t know yet.”

Since most of the streams are located on Forest Service lands, another question has been raised on the impacts to grazing and logging. A Forest Service representative said Tuesday “we don’t have information to share about the designation at this time” and did not provide comment for this story. Gaztambide, however, said an OW designation does not impact uses like grazing.

Peter Butler, who serves as a consultant for SWCD and has worked on water quality issues in the region for years, said he wasn’t aware of too many issues with the OW designation in Colorado over the years. In 2009, Hermosa Creek, for instance, was designated as the first OW outside of a wilderness area or national park, and the situation hasn’t run into any problems or controversy.

To nominate nearly 30 streams in one proposal is a big project, Butler said. But OW, though rarely used, is a way to protect precious water resources at a critical time, in a way that’s more regulatory and doesn’t have to go through a political process. In June, CDPHE’s nine-person Water Quality Control Commission is expected to vote on the proposal.

“I think (the environmental groups) tried hard to reach out to stakeholders,” Butler said. “They’ve been doing their homework.”

Gaztambide said the designation will also protect these vital tributaries, which provide a boost of clean water to major rivers should a large event, like the Gold King Mine spill or mudslides from the 416 Fire, seriously impact water quality and threaten drinking water for downstream towns.

“The magic of water quality are these pristine tributaries; it’s why rivers can bounce back from those major events,” Gaztambide said. “I think we have enough buy-in. I think we’re in a good spot.”