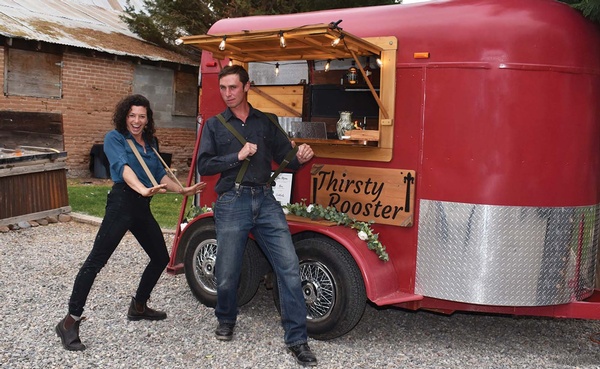 Charlotte Ford and Marc O'Connor, purveyors of the Thirsty Rooster

Thirsty Rooster, Durango’s hip mobile bartending service trailer bar, wants to make your next celebration or backyard shindig one you won’t soon forget. But first, let’s get one thing straight: They’re not Toast. They get that a lot. (For those who don’t know, Toast is the former mobile bar and traveling lounge that evolved into what is now the popular Union Social House on North Main.)

Thirsty Rooster co-owners and good friends Charlotte Ford and Marc O’Connor were inspired to start their own business when they moved to Durango from Bend, Ore., back in 2017. With a combined 20+ years of experience in the food and beverage industry, they knew their business would most likely revolve around this sector. However, they were not exactly sure what their business would (literally) look like. That is until one day, while driving through Bayfield, they spotted a fire-engine red 1972 vintage horse trailer for sale on the side of the road. The two friends excitedly bought the trailer the very next day.

“We saw this little red horse trailer and immediately knew we wanted it even though we weren’t sure what it was going to become,” O’Connor explained.

Initially, Ford and O’Connor tossed around the idea of starting a food truck with their newly acquired trailer, but given its small size, they eventually decided a mobile beverage bar with creatively crafted cocktails would be the perfect fit for them. So, in the winter of 2017, O’Connor customized the trailer’s interior to transform it into a workable space that would accommodate the needs of their new mobile beverage service.

Thirsty Rooster officially launched the following year in early 2018 in its flagship vintage red trailer. The business now touts an additional retro draft beer trailer – also rebuilt and customized by the industrious O’Connor – as well as two mobile wooden bars or “roosts,” as they are called. This collectively allows Thirsty Rooster to serve up libations to as many as 300 people at both public and private events, such as weddings, birthdays, anniversary gatherings or holiday parties.

Though crowds of humans simultaneously descending upon you for a drink can be daunting, Ford and O’Connor pride themselves on maintaining a steadfast standard during these high-pressure cocktail-slinging moments: No bar lines. “We hear these nightmare stories from people who attended other weddings with only one bartender for 150 guests, and the waiting line was so long,” said O’Connor. “For us, that would be a failure, and we refuse to let that happen at our events.”

Ford concurs. “There’s a lot going on, for example, at a wedding, and the last thing we want is for someone to have to wait so long for a drink that they miss a special moment, like the cake cutting or the bride and groom arriving,” she said. “Our philosophy is to get the drinks out as fast as possible without sacrificing the quality.”

And the creative, handcrafted drinks Ford and O’Connor concoct are what really give Thirsty Rooster its unique service flair. In the case of weddings, the partners like to meet with the couple to get a feel for them and the type of drinks they enjoy. They then create a specialty drink unique to the occasion. “After getting to know the couple, we create a menu curated around what we think they would like,” Ford said. “If they’re local, we will set up a private cocktail tasting where they can try the cocktails we’ve created, see the colors of the drinks and their garnishes, and go over any other details. It’s part of our service.”

One popular creation, named the Southwest Lady by Ford, comprises tequila, aperol and fresh, organic grapefruit juice with a touch of jalapeño syrup and lime juice and completed with a chili-sugared rim. “It’s like a spicy Paloma with a twist,” Ford said.

And then there’s the Thyme for a Rye, made with rye whiskey, blackberries, organic lemon juice and thyme-infused simple syrup.

Depending on customer preferences, Thirsty Rooster also offers non-alcoholic packages, including lemonade, coffee, tea and water stations. “Most of our specialty cocktails can also be mocktails, so we can make them without the alcohol,’’ Ford explained.

As Thirsty Rooster moves toward becoming a more full-service event coordination company, Ford and O’Connor have recently expanded their offerings to include more personalized options. They’ve introduced several new features, including yard games and a mobile photo booth. In addition, customers may rent the photo booth as a stand-alone service.

For Ford and O’Connor, building connections with people during these special occasions is not only what they consider part of their job; it’s one of the most enjoyable aspects of it. Ford describes how she and O’Connor love meeting the bride and groom beforehand in the case of weddings. “For me,” Ford said, “it makes for a more exciting, more personalized experience. Then, when they come to the bar, it’s like meeting up again with an old friend.”

“It feels good when the bride’s mother comes up, gives us a hug, and thanks us,” O’Connor added.

Ford and O’Connor are currently booking for their summer season, though – full disclosure – they’re already halfway booked through 2023.

For more information on the Thirsty Rooster, check them out at www.thirstyrooster.com. ? 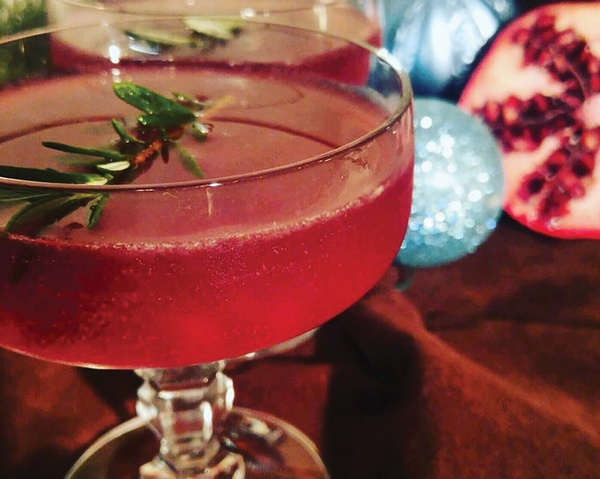 One of the Thirsty Rooster's signature cocktails, "How the Gin Stole Christmas"