Putting down roots
After moving around for more than a decade, Liberty finds a place to call home 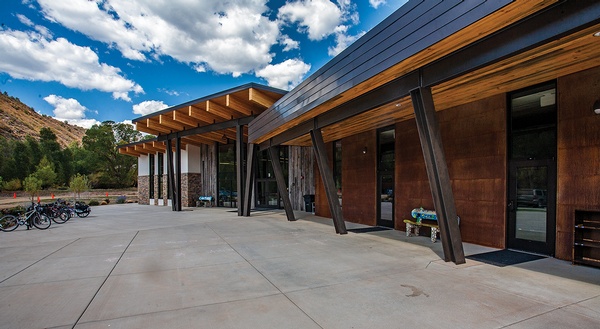 The Liberty School's new home was designed with Colorado in mind. Earth tones are used in the flooring, high ceilings in the main entrance and wooden cubbies for students lining the main corridor. It sits on a 9-acre property, all of which was given to the school by an anonymous donor, and most of the land has been left as open space and trails./Photo by Stephen Eginoire

The first – and last – thing you notice are the smiles. Not because it’s recess, but because the students are happy to be in the classroom. Something that might seem curious for a group of kids who’ve struggled with school in the past.

But, that’s what makes this place so unique. The students have fun learning because this school was built for them.

In someone else’s shoes
The Liberty School teaches students from first to eighth grade who are dyslexic, gifted or what’s called twice-exceptional – meaning they are both gifted and dyslexic.

Grouping the two together is important for a couple reasons. Gifted students often have other challenges, like sensitivity to sound or light, making the typical classroom setting a difficult learning environment. Also, dyslexic students are often gifted. People with dyslexia tend to be entrepreneurs,  inventors, or out-of-the-box and creative thinkers.

“It’s a learning difference as much as it is a disability,” Christian Holmen, Liberty School’s Teaching Head of School, explained. “There’s plenty of advantages to having dyslexia.”

Some famous dyslexic individuals include Apple cofounder Steve Jobs, investor Charles Schwab, Gen. George S. Patton and Colorado Sen. Michael Bennet. Also, as scholars learn more about dyslexia and continue to study the journals and other written works of Leonardo Da Vinci, it seems that he, too, was dyslexic.

Although it can have advantages, dyslexia also has disadvantages. The chief one being students with dyslexia don’t fit into the typical classroom mold. It’s something Holmen was able to get a sense of at Reading in the Rockies, an annual conference for educators hosted by the International Dyslexia Association.

One of the events he attended was a dyslexic simulation – specifically an oral reading exercise.

The educators in attendance were given passages to read aloud in a circle, a common activity in public schools. However, the passages were printed with some of the text backwards or upside down. It wasn’t an exact replica of what a dyslexic student sees on the page, but it was like peeking through a window of what dyslexic students experience.

As they went around the circle, Holmen said, others seemed to be reading their passages just fine. He, on the other hand, was having to work hard to read the words on his page and figure out what was going on.

“It’s building this anxiety in me,” he explained.

The feeling of being alone in the struggle and not being able to cut it was overwhelming and, Holmen said, it’s something that takes a toll on a student’s self-image and psyche.

“I came out of there profoundly affected,” he added. “And, this is what they live with every single day.”

Holmen said the first goal for the teachers and administrators at Liberty is to break down the social and emotional barriers that many of the kids have because of similar experiences.

“The first order of business is making sure they know ‘We got your back,’” he said. “We’re going to move you at a pace that’s right for you; and we’re going to push you sometimes, but it’s OK if you stumble and fall.”

The curriculum at Liberty is highly individualized with special attention paid to one-on-one tutoring sessions, which Holmen called the lifeblood of the curriculum.

This type of instruction is called Orton-Gillingham, named after its creators, Samuel T. Orton and Anna Gillingham. It’s a phonics-based system of learning first introduced in the 1930s and is meant for children with dyslexia or other reading challenges.

This teaching method focuses on the basics of word formation first, essentially breaking the code of the English language and utilizing the senses – visual, auditory and kinesthetic – to tap into a student’s ability to learn.

Neither the students nor the curriculum at Liberty are divided up by grade level. The children are taught where they are at, not where their age or grade determines.

“If he’s three and needs to be in algebra, he’ll take algebra,” Holmen explained. And, vice versa. If an older student needs basic math, that’s the class he or she will take.

“The school is really designed to meet the needs of the kids individually and each one is so different,” Holmen said.

Home at last
After jumping around five temporary locations over the past decade – including church basements and airport hangers – Liberty students finally moved into their permanent home on Western Avenue, just off Junction Creek Road on the north end of Durango, to start the 2018-19 school year.

“It’s the best thing, by far, to have a place to call home,” Holmen said.

“And, a place that’s designed to be the best place for our kids,” Barbara Stine, president of Liberty’s Board of Directors, added. “That makes this building as special as the school.”

Stine joined the school’s board after a friend and fellow board member took her for a visit several years ago. She said she walked into a noontime reading session, but it wasn’t what she expected to see. In Liberty’s version, the students were reading to the volunteers – not the other way around.

Her first thought after that was, “How can I not give 25 minutes a week to these kids, when this school is so important?”

Of course, Stine gives much more than 25 minutes a week. It’s probably closer to 25 hours, but like everyone else at Liberty, she does it for the students.

“The staff is really here because they believe in the mission,” Holmen said. “They believe in what they’re doing.” The Liberty School first opened its doors in 2007. That year, they had 12 students. In 2017, they ended the year with 32.

As word begins to spread about Liberty’s unique and specialized curriculum, more students join its ranks. Although most hail from La Plata County, there are students from other parts of the Four Corners and as far away as Alaska, Minnesota, Connecticut, Texas and Nevada.

The school currently has three classroom teachers – including Holmen – and 11 tutors. None of them get any benefits, like health insurance or retirement plans.

As a private school, Liberty doesn’t receive any state or federal funding. It relies primarily on fundraising efforts and grants.

The current tuition is $15,600, which is actually much cheaper than similar schools in other parts of the country, according to Holmen. About half the students receive some kind of scholarship help, and each year the fundraising priority is to raise scholarship funds.

“We can never reward as much as we’d like,” he added.

Holmen said it’s not fun to ask for financial help, but it is humbling to see people offer it. And, the school’s new home would not have been possible without fundraising and donations.

The dream of a permanent home kicked into high gear about three years ago when the 9-acre property was donated by an anonymous supporter. The administrators and Board of Directors then raised $1.6 million in donations, which allowed them to secure a remaining $1.5 million loan, both of which were used to pay for the new facilities.

More than half of the campus is open space and trails where the students can get outdoors to learn and have fun. Students with dyslexia work extremely hard on their education – especially in reading and writing – so getting them outside and having fun is important, Holmen said.

It took a couple years to get through all the permitting, fundraising, designing and other necessary hurdles of creating a new home, but Holmen and Stine said the design was the best part.

The building was created with Colorado in mind. It resembles the state’s natural setting with earth tones in the flooring, high ceilings in the main entrance and wooden cubbies for students lining the main corridor. Holmen said it’s meant to feel like home, and still be professional.

The main hall has a handful of classrooms on one side – each featuring a combination of chalkboards and iPads – and small offices used for one-on-one tutoring sessions on the other.

Along every wall lining the hallway are photos of former students enjoying the outdoors or working together in the classroom. And, just like the current students walking the hallway, every one has a smile on his or her face.

“That’s what we’re built for,” Holmen said, “to help these students.”