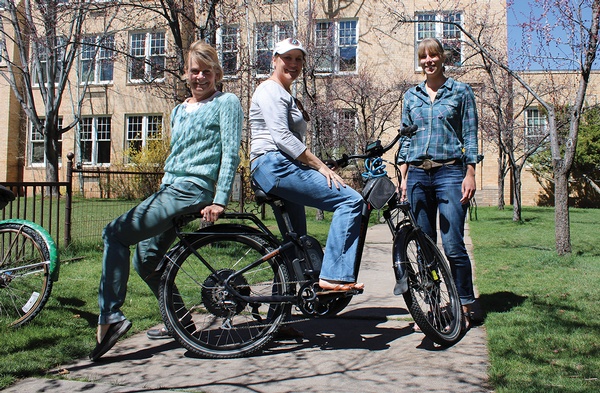 Local restaurant workers will soon be rolling to work in sustainable style. Thanks to a $50,000 grant from the Colorado Energy Office, 16 low-income workers will receive e-bikes through a pilot program of the 4 Corners Office of Resource Efficiency, aka 4CORE. The local nonprofit was among just a handful of recipients in Colorado to receive the grant funding from the state’s “Can Do Colorado Community Challenge.”

“Each entity could propose their own idea,” 4CORE Executive Director Laurie Dickson said of the grant application. The only prerequisite for the program, which is meant to increase access to e-bikes, reduce emissions and provide a healthy alternative for commuting, is that the recipients be low-income essential workers. For its purposes, 4CORE is focusing on restaurant workers who make less than 60 percent of the median income. “We chose restaurant workers because ours have been so hard hit by the pandemic.”

Called “Roll to Restaurants,” the program is going to start small, focusing on workers at Zia North, Bird’s and Sunnyside Café, south of town. Workers must submit an application by May 1, and after a selection process, the rubber will start hitting the road in June.

“We hope to have complete roll out by July,” said Dickson.

The bikes, manufactured by Seattle-based Rad Power Bikes, were procured for the program through the help of Roll, a local e-bike rental company. The bikes are Class II e-bikes, meaning they are pedal-assist with a throttle. However, they do not go over speeds of 20 mph. In addition to the bikes, recipients will also receive helmets, LED lights, locks, panniers and – most importantly – training from Roll’s co-owner, Claire Attkisson.

“Even though the bikes go 20 mph, that’s only if you’re riding on the road,” she said. “We instruct people if they’re riding on the Animas River Trail, they can’t go over 10 mph because there are so many other bikers, dog walkers and people.”

The bikes also come with removable battery packs, which workers can take off and recharge when they go into work or get home. This is helpful not only for those who may not have a place to charge their bikes, but also helps deter against theft.

Dickson said the program is being deployed with the help of Compañeros, which is helping to identify participants and translate program documents into Spanish.

“There has been quite a bit of education and outreach,” she said.

The bikes technically are “loan to own,” she said. The only requirement of participants is they chart their travels on an app, which is being developed by the National Renewable Energy Laboratory. Data gathered will help the state track things like how many carbon emissions are being saved by the e-bikes.

“The primary goal of the state is to lower emissions from transportation,” Dickson said.

Will Toor, director of the Colorado Energy Office, said the program came about as a response to the pandemic. Last spring, his office started hearing stories about essential workers who had decided to avoid the close confines of buses and light rail and instead use their own cars to get around. In other areas, bus routes were cut all together.

Kris Oyler, CEO of Peak Food and Beverage, which owns Bird’s as well as Steamworks and El Moro, said the program is welcome news after an especially rough year where most of his workers were furloughed. “We were fortunate to get both rounds of PPP loans,” he said. “We paid people even when they weren’t working so they could pay their rent, keep the lights on and have bellies full of food.”

He said he’s excited to be part of the program and hopes eventually it will grow to help more people – and the environment.  “This could be a real good deal for a lot of people,” he said. “Hopefully it’s something we can expand upon.”

Dickson agrees. If the program is successful, she envisions it could be replicated in other sectors of the community. Of course, this is all dependent on funding.

The strategy is one of many outlined in Colorado’s climate change “roadmap,” which spells out how Gov. Jared Polis intends to meet carbon-reduction goals passed by the Legislature in 2019. Toor said equity is an important piece of getting people out of internal-combustion cars and thinks e-bikes could play a larger role as Colorado confronts climate change. Transportation now accounts for more emissions than any other sector of Colorado’s economy, with a large portion coming from people driving bikeable distances. According to the U.S. Department of Energy, three-fifths of each household’s 2017 car trips, nationwide, were 6 miles or less.

“I think there is significant potential over time for e-bikes to play a really important role in replacing a lot of those short-to-medium distance trips,” Toor said.

The Roll to Restaurant program is done with support from the City of Durango, LPEA and the Fort Lewis College Environmental Center. n