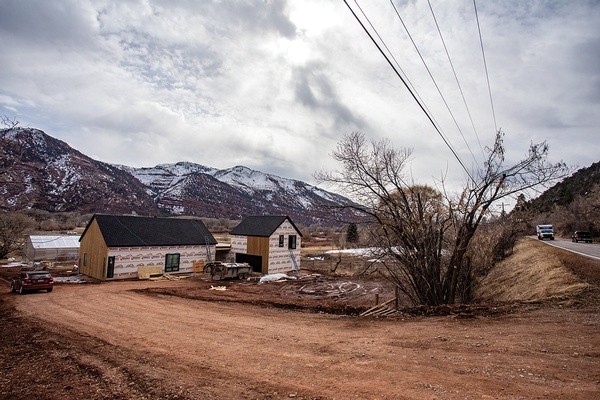 A house and accompanying accessory dwelling under construction in the Animas Valley. A new law making its way through the state Legislature would allow counties to license and regulat short-term vacation rentals. La Plata County has nearly 900 short-term rentals but no laws regulating them./Photo by Stephen Eginoire

A third of Summit County homes are at least occasionally used as Airbnb-style short-term rentals, according to county commissioner Thomas Davidson. As with elsewhere in the state, that brings disagreements between neighbors, landlords and guests.

“We’ve had open sewage running down a driveway because someone had overrun a septic system at a house, a crazy loud party, a bear eating overflowing trash,” Davidson said.

Right now cities can set rules on everything from parking to trash, but rules for short-term rentals operating outside of a city’s boundaries aren’t enforced in the same way.

House Bill 1093 would allow counties in Colorado to license VRBO, Airbnb and other short-term rentals that are outside cities limits in unincorporated areas. The main sponsors are from rural parts of the state that rely heavily on the tourism industry and say there have been numerous complaints about how short-term rentals are managed, from too many cars to too much noise to overflowing trash bins.

“We hope to be far more responsive, be able to address these particular problems around parking, trash, snow clearance, septic and well use,” Rep. Julie McCluskie, D-Dillon, said.

According to AirDNA, a website that tracks the industry, there are currently 2,739 active short-term vacation rentals in the Dillon area alone. In the Durango area, there are nearly 900 short-term rentals, according to the site.

La Plata County does not regulate short-term rentals, and property owners are not required to notify neighbors or get an inspection, as is the case in Durango city limits.

Property owners are, however, required to remit sales and lodgers tax – although many do not. County officials have recently announced plans to crack down on vacation rentals to ensure they are paying the proper taxes. The county expects to net $370,000 in lodger and sales tax for 2019.

“We want to be able to address those out of the gate so that our short-term rental owners are aware of their responsibilities before we end up with these problems,” McCluskie said. “It is not to dampen the short-term rental market. We know they’re essential to Colorado’s very vibrant and thriving tourism economy.”

Rep. Jim Wilson, R-Salida, another sponsor of the bill, said it wouldn’t require counties to regulate short-term rentals, but he said many already are doing it through their land use regulations.

“That’s the problem: ‘What (are the) county commissioners going to do this week to regulate it?’ There’s no guidelines. Municipalities have it. Counties do not.”

“Any sort of enforcement is a lengthy, time-consuming process that involves heading off to court. With licensing you have the ability to immediately suspend a license, write someone a ticket and provide an immediate response,” Davidson said.

During a debate in the House on Feb. 10, several Republican lawmakers expressed concerns about added government involvement in issues like the number of cars parked in front of a house.

“I would just ask, is it really the government’s business, whether it’s a large family reunion over the weekend or if it’s something else?” Rep. Tim Geitner, R-Falcon, said. “I just don’t know that we need to dive into that level of granularity of people, that are looking to do different functions on their private property.”

Rep. Shane Sandridge, R-El Paso County, said his district, near the United States Air Force Academy, has a lot of people who temporarily rent out homes or rooms.

The measure passed its first committee 9-2 and is expected to handily clear the House.