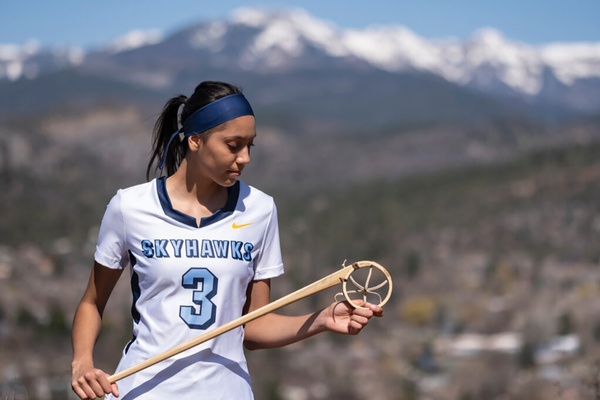 FLC?student Nina Polk, like many students across the country, was impacted by the pandemic in the past year./ Photo by Jeremy Wade Shockley/CPR News

After the pandemic sabotaged her senior year of high school lacrosse, Nina Polk was determined not to miss another season.

Although her mom was hesitant to let her go away to college, the family piled into their car in August 2020 to make the 20-plus hour drive from their home in Shakopee, Minn., to Durango where Polk had been recruited to play women’s lacrosse at Fort Lewis College.

The liberal arts college, a former Native American boarding school that today offers free tuition to Native students, was Polk’s dream school. In addition to the tuition waiver, it had everything she was looking for: a Division II sports program, a fine arts major and gorgeous natural surroundings.

“It was kind of a package deal for me,” said Polk, who is Diné (Navajo), Sicangu Lakota, San Carlos Apache and Quechan. “The first few weeks, it was kind of hard to adjust, because of just being away from home. But with everyone here, and my teammates, they just made it a whole lot easier. And the Native community here, too, I don’t feel alone.”

Simply by getting to college, Polk, now 19, stood out from many of her peers. Only around a quarter of 18- to 24-year-old American Indian and Alaska Native people were enrolled in college in 2019 according to the National Center for Education Statistics. Native American students are also more likely to drop out of college during or after their freshman year and more likely to transfer to a different institution.

Then the pandemic hit, throwing up additional obstacles. Last fall, the share of Native American students enrolled in college for the first time plummeted by almost a quarter, more than for any other racial or ethnic group, according to the National Student Clearinghouse Research Center.

The barriers that can derail Native Americans in their pursuit of a college degree are numerous. These students are more likely to face financial difficulties or experience racism than many other student groups, according to higher education experts. Research shows that finding professors, peers and mentors who understand them and can help them create a sense of belonging on campus can be crucial to helping Native students succeed on campus.

Fort Lewis was the first school Polk attended where she felt like she belonged, and college officials say that sense of community is intentional. The college runs programs such as Native Skyway to Success, a pre-orientation for incoming first-year and transfer students that allows them to connect with other Native students and staff at the college.

In fall 2020, Fort Lewis was able to buck national enrollment trends, increasing the number of first-year Native students by 11%. First-year enrollment of Native (and all) students has continued to increase for fall 2021, with Fort Lewis admitting its largest freshman class ever, said provost Cheryl Nixon. She attributes some of the boost to 2020 high school graduates coming back to college this fall after taking a year off.

In its communications to students during the pandemic, the college also tried to be inclusive, designing a safety campaign around the Diné, or Navajo, concept of K’é, which broadly means kinship and mutual respect.

“When our Native American students talk about a community of care, they mean their Fort Lewis community, but they really mean their home community,” Nixon said. “What we’ve learned at Fort Lewis is we really need to do outreach to the students that respects their connection to their family … And that has not been done well by higher ed.”

Still, having a lot of Native students on campus doesn’t eliminate prejudice, Polk said. At Fort Lewis, she overheard students complaining that Native students don’t deserve to “get in for free,” she said. It’s the kind of derogatory comment about Native people she’s heard her whole life, she said.

In middle school, Polk had almost abandoned athletics after some of her basketball teammates bullied her for her culture and physique at 6 feet, 1 inch, despite its advantages for the sport. (In a TikTok video on frequent questions she gets, Polk explained “the Creator wanted me to be closer to my ancestors” when asked why she was so tall.)

It wasn’t until she picked up a lacrosse stick in seventh grade that Polk finally found her sport. She first played modern lacrosse when she tried out for her high school team as a ninth-grader. Lacrosse quickly became a driving force as she started to look at colleges.

And while she was able to experience campus life for a few months in 2020, Polk’s fall semester at Fort Lewis was cut short. In early November, the lacrosse coach called an urgent team meeting. An on-campus party had been the source of a coronavirus outbreak. The team, gathered on the field, fell silent as their coach told them practice was suspended for the rest of the fall.

Then, the college announced all instruction would be remote until Christmas break. Polk made the decision to return to Minnesota and finish out the semester there.

At Fort Lewis, Nixon says that the challenges of last year are showing up in the college’s retention rate – the number of first-year students who return for a second year. In fall 2019, the college retained 62% of all students and 57% of Native American students. In fall 2021, the numbers were 54% and 49% , respectively – meaning that fewer than half of Fort Lewis’ Native American freshmen in fall 2020 came back to campus the next year, according to data from the college.

That’s in line with national trends. Native Americans were the most likely group to withdraw or take a leave of absence from college due to the pandemic, according to the National Center for Education Statistics.

Nixon said that all freshmen were affected by the disruptions of the pandemic, but Native students tended to be hit the hardest.

“That ‘COVID class’ is not coming back for their second year, because they had just such a crazy first year — completely disrupted, shifting online,” she said. “So many of our Native American students … wanted to go take care of a family member, or just felt that draw back home.”

This fall, that includes Polk, who decided to take the fall semester off to heal from a knee injury, spend time with her family and take care of her mental health.

To encourage students taking time off to return, Fort Lewis will be launching a “circle back” program in the next month, Nixon said. The college plans to hire two additional advisors who will stay in touch with students and help connect them with resources when they are ready to come back, she said.

Polk, for one, says she is certain she’ll return to Fort Lewis. When she does, she intends to switch her major from studio art to Native American and Indigenous studies “to learn more about my culture, my people” and find new ways to advocate for the sport she loves.

For more from Colorado Public Radio, go to www.cpr.org. This story was produced by The Hechinger Report, a nonprofit, independent news organization.