Round & round
Silverton set to vote on OHVs in town ... again 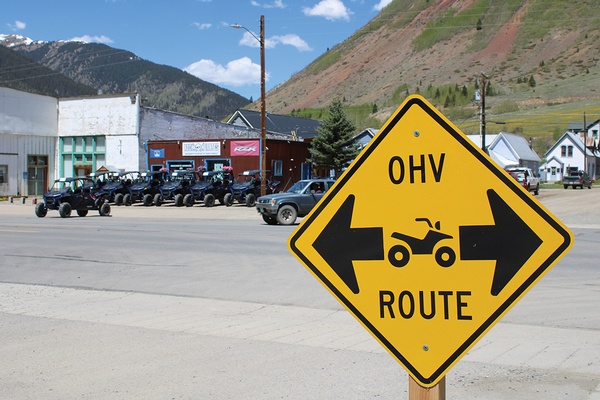 San Juan County Sheriff Bruce Conrad said attempts to allow OHVs in town have continually run into issues, and as a result, he believes it would be hard to find a middle ground that works for everyone. This photo was taken in summer 2021, the last year OHVs were allowed in town. Now, Silverton residents appear headed for yet another election on the issue in early 2023./ File photo

After just one summer with the off-highway vehicle ban in effect in Silverton, a new citizen-led petition seeks to reopen streets to the controversial four-wheelers.

Seeking to boost tourism, the town of Silverton in 2014 voted to open select streets to OHVs, providing access to people traveling backcountry roads to businesses in town.

However, the move didn’t have full support of the town. As the popularity of OHVs skyrocketed, so did complaints over noise, dust and traffic, as well as illegal off-roading and environmental damage.

After a record busy year in 2020, Silverton residents again forced a vote whether to ban OHVs in town limits in October 2021, with 291 in favor of ousting OHVs and 189 against.

With streets clear of OHVs, many Silverton residents touted the peace and quiet this past summer and celebrated the increase in other recreation users, like hikers and mountain bikers. The ban, however, was less welcome among some in the business community who say sales were down because OHV riders were not allowed within town limits.

On Oct. 18, the town of Silverton received a petition to reopen the town to OHVs, with sufficient signatures from 5% of registered voters (about 32 people, though town records show 87 people signed). Multiple attempts to reach organizers of the petition were unsuccessful. But even still, it appears Silverton is headed for another vote on the issue in early 2023.

Hard to pin down

Whether business was down – and by how much – because of the OHV ban is a difficult question to answer. Generally, the best indicator of a town’s economic health is sales tax revenues. In July, Silverton’s busiest month, sales tax revenues were $217,481, about a 7 percent decrease from July 2021, the last year OHVs were allowed in town, when taxes were $233,606.

But it’s impossible to determine how much of that is due to the OHV ban, as there are far too many factors influencing sales tax, said DeAnne Gallegos, director of the Silverton Area Chamber of Commerce. The summer of 2021, for instance, was a record year for visitors amid the COVID-19 pandemic, with people traveling to mountain towns at unprecedented rates.

And the reason for the downturn this summer could be due to a number of factors including inflation, the price of gas, staffing shortages and the reopening of international travel. Plus, the Red Mountain Lodge & RV Park, one of the biggest lodgers in town, didn’t book reservations because of an impending sale that ultimately fell through.

Silverton’s largest tourist attraction – the Durango & Silverton Narrow Gauge Railroad – remained on pace with ridership numbers in July compared to last year. However, it saw a “significant” dip in August and September, said Jeff Johnson, general manager of the D&SNG. (On the flip side, in 2019 the state of Colorado started including online sales in its sales tax numbers, which also accounts for an increase.)

“It’s really hard to pin our sales tax fluctuations to one thing or another, whether it’s positive or negative,” Gallegos said. “No summer is ever smooth sailing or normal when you’re a small business owner in a tourist economy in a high alpine town.”

As a result, Gallegos said it’s important to look at economic trends of other towns in the region. And, she said, the sales tax in Durango, Ouray and Lake City are all down or flat lined. Ouray, for instance, was up just 0.89% in August compared to last year. In Durango, sales tax from July 2021 and July 2022 were nearly identical at $3.5 million.

“If you look at the Western Slope sales tax for all communities, we’re on par with our neighbors, and even sustaining our growth from 2021,” Gallegos said.

Scott Fetchenheir, a San Juan County commissioner who owns Fetch’s Mining & Mercantile, said business was slightly down this summer compared to 2021, a record year, but far up from pre-pandemic years. But with all the contributing factors – gas prices, inflation, etc. – it’s too difficult to blame it on the OHV ban.

“Truthfully I can’t say if it affected me or not,” Fetchenheir said. “I’m pleased with the business we had this past summer.”

Yet many business owners maintain sales were down directly because of the OHV ban. Jim Lokey, owner of the Red Mountain Motel & RV Park who started the petition to reverse the ban, did not return requests for comment.

Nancy Swanson, owner of the Canyon View Motel, said her hotel was booked throughout the summer. But with OHVs not allowed in town, it makes it difficult for people camping on the outskirts of Silverton or visiting for the day from Lake City or Ouray to come into town to shop and eat.

“Our poor restaurants were left holding the bag,” Swanson said. Attempts to reach several Silverton restaurant owners, including Molly Barela, owner of the Golden Block Brewery and an OHV supporter, were not successful.

For those supporting banning OHVs from town limits, it felt like they got their town back. “It was wonderful,” Karla Safranski, the former owner of the now-closed Z E Supply and a former town trustee, said. “A big sigh of relief.”

When OHVs were allowed in town, it was a madhouse, Safranski said. Drivers didn’t adhere to legal routes, sped down residential roads and generally were disrespectful of the town.

“It’s not that we don’t want to welcome visitors,” she said. “But there were thousands of them. It was a zoo here. We just couldn’t handle that, and the disrespect to this community was just too much. You can’t drive in Dallas on any public road, but they come here and want to do that on our streets.”

Dana Chambers, who now owns Silverton Hardware, said the store adjusted its inventory to accommodate new visitors, mostly other recreational users, such as thru-hikers from the Colorado Trail. “Our summer started incredibly slow, being down over 30% by the end of July,” she said. “But then thru-hiker business and the leaf peepers brought us back up by the fall.”

Swanson, though, said she is in favor of finding a compromise that would allow OHVs to ride in town again.

“I am supportive of getting OHVs back, but maybe not the old routes we had,” she said. “Our businesses are hurting and people need to work together.”

So, is there a way to find some middle ground? San Juan County Sheriff Bruce Conrad, whose small department took the brunt of having to enforce OHV routes, said that might be difficult.

“I wish I could say that I saw some potential for some middle ground, but I don’t think there is a viable option that includes OHV operation in town,” Conrad said. “I have said for many years now that an appropriate staging area and private businesses providing services, such as those mentioned by Silverton Lakes Campground, is the solution. Trying to sign a specific route (in town) has been tried with a multitude of signage and stripes and proven not to work.” (Conrad has advocated to open a bypass between county roads 110 and 2 to create a loop for popular trails in that area.)

Conrad said it’s unfortunate the OHV issue is being brought to a vote again, as it’s divided the small mountain town for far too long. However, the overwhelming sentiment he’s heard from residents is support of the ban. He said had the energy been spent on fixing issues brought on by OHVs, instead of all the elections and negative rhetoric, the issue might have been fixed. Instead, he said the issue may be beyond repair.

The upside, however, is that Silverton is seeing a rise in new user groups in the wake of the OHV ban, Conrad said, especially among people who might have previously stayed away from the chaos of OHVs.

“I know there are piles and piles of rhetoric online from the more vocal side of this issue claiming Silverton will shrivel up and die, showing memes of ghost towns with tumbleweeds blowing down empty streets,” he said. “But those of us truly in touch with our community know how ridiculous those notions are.”

Currently, the petition is in a 40-day period where residents can file a protest on whether the signatures were valid. Once complete, the Board of Trustees have 20 days from Nov. 28 to consider the petition, deciding whether to adopt it or put it to a town vote sometime between January or April, at a cost of $4,751.

But with the decisive vote to ban OHVs last fall, many residents wonder if enough has changed in the past year to reach a different outcome. Like many mountain towns, Silverton has changed since the pandemic as more families with children and retirees have moved to town. Both groups generally fall in the anti-OHV category.

And, it should be noted, this most recent petition calls for the same exact routes to be reopened, without offering any alterations or solutions to all the issues that have been raised with OHVs in town. Even still, it appears Silverton residents will have a simple “yes” or “no” vote this coming year.

“I just don’t think the dynamics have changed that much from last year’s vote,” Safranski said. “The people that want OHVs are the same, and those that don’t are happy with the ban. We got our town back.”

This story has been updated to reflect Safranski was the former owner of the now-closed Z E Supply.