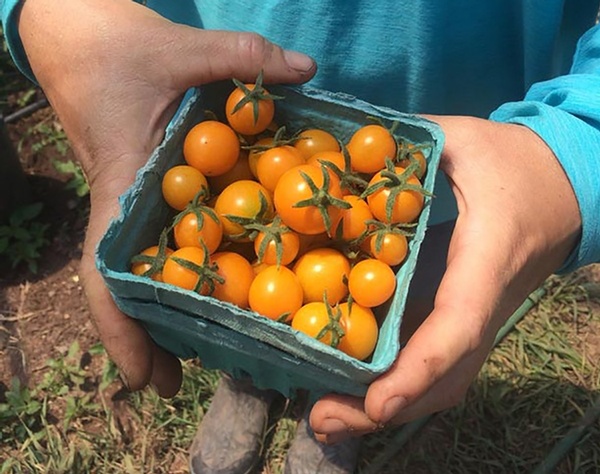 Linley Dixon, of Adobe House Farm, holds a pint of sungold tomatoes. Dixon is the first local farmer to apply for a zero percent micro-loan through Four Corners Slow Money. She is asking for $3,000 to build a greenhouse that will help extend her season./File photo

There’s nothing slow about the Four Corners Slow Money movement. After officially setting down roots in March 2019, the group is ready to fund its first local farmer.

On Sun., Oct. 6, the group will host its inaugural Potluck and Farmer Pitchfest at Manna Soup Kitchen, from 4 – 7 p.m. During that time, members, each of whom have voting privileges, will hear a pitch from local farmer Linley Dixon, of Adobe House Farms, who is asking for $3,000 to fund a new greenhouse. If members vote yes, Dixon will receive a 0 percent interest loan to help pay for the project. Payments on that loan will go back into the Slow Money pot. The hope is to have another pitchfest next February, making it a bi-annual event.

“Through the 14 years I was in business, I watched farmers quit and leave farming all together. I often asked them why and ... the common trend was that it was too expensive, they could not pay the bills and had no hope of ever owning land,” she said.

In addition to helping grow opportunities for local farmers, the goal of this event is also to raise awareness of the Slow Money mission, strengthen ties among the farm community and celebrate the local food system.

The Slow Money movement is built around local groups, which catalyze local food investing in a variety of ways, including: peer-to-peer lending; public meetings; pitch fests; and on-farm events. Local Slow Money groups are organized as informal networks and/or investment clubs, with 27 groups globally that have invested $73 million in 752 food enterprises.

Illsley and others in the Slow Money movement feel investing in small, organic farms is especially important now, given climate change, decreasing soil fertility and increased acidification of the oceans, all of which is exacerbated by large agribusiness.

“It does not matter how much money there is, if we continue to invest irrespectful of how much we are hurting the environment, we will reach a point where we will not be able to produce food,” she said.

Four Corners Slow Money's goal is to build a robust local food economy by giving community farmers, growers and local food enterprises a leg up in the Four Corners region, which includes southwest Colorado, northwest New Mexico, southeast Utah and northeast Arizona. To join, members must make a donation to the club ($250/year or $150/year for grower/food entrepreneur). The money is then put into a pot that makes 0 percent loans to farmers.  According to the group, loan-ees are selected based on his or her potential to make the greatest positive impact on the local food economy as well as a set of ethics.

As of August, there were 14 members who had contributed close to $5,000 for the loans. The group is overseen by a steering committee, which recommends farmers applications for loan approval.

Folks interested in seeing what Slow Money is all about can attend the event on Sunday or go to www.fourcornersslow money.org.