Something in the water
Trying to get a handle on E. coli issues in the San Juan, Animas rivers 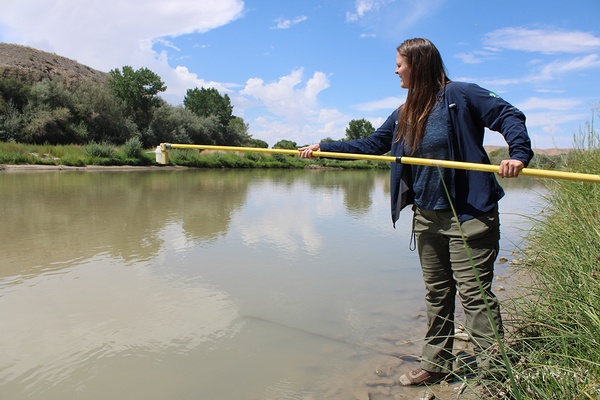 Alyssa Richmond, coordinator for the San Juan Watershed Group, takes water samples out of the San Juan River to test for E. coli. In recent years, agencies have worked to reduce the bacteria in the waterway./ Photo by Jonathan Romeo

“We know who pooped in the river, now we’re trying to figure out where it’s coming from,” Alyssa Richmond said as she took a sample of water recently from the muddy San Juan River, in the blazing high desert outside Farmington.

Richmond is coordinator for the San Juan Watershed Group, a collection of local agencies and volunteers working to improve water quality on the San Juan River as it runs through northern New Mexico. The group’s ultimate goal, Richmond said, is to have the stretch of river meet national water quality standards. But as it stands, it’s not going well.

Among a plethora of water-quality issues that include mine pollution, urban runoff and rising water temperatures amid an increasing drought, is the issue of E. coli contamination. A naturally occurring bacteria that lives in all humans and animal stools, E. coli can contaminate ground and surface water, and lead to health implications.

For at least the past 10 years, researchers have launched a full-scale investigation to better understand E. coli issues up and down the San Juan River watershed, from high up in the San Juan Mountains to its major tributary, the Animas River, to stretches that run into the Navajo Nation.

Early results are not encouraging: the EPA’s standard for acceptable E. coli levels is 126 colony-forming units (CFU) per 100 milliliters. In stretches of the San Juan River through Farmington, water samples taken this summer exceeded nearly 1,500 CFUs. “We didn’t expect it to be as high as it was,” Richmond said on a sampling day in late August. “It was shocking.”

But it’s not all doom and poop. The San Juan Watershed Group’s efforts will ultimately help inform where cleanup projects should be focused to achieve the highest improvement in water health. And, all up and down the watershed, even to the highest reaches of the Animas River around Silverton, there is a concerted push to face E. coli issues head on.

“The good news is everyone agrees there should be no human poop in the water,” said San Juan Citizens Alliance’s Animas Riverkeeper Marcel Gaztambide, who probably never thought he’d have to make so obvious a statement to the local paper. “And it’s an issue of concern, so it’s good we’re talking about it now.”

E. coli is a difficult contaminant to fully contextualize because not only is it naturally occurring, it is also one of the most common bacteria. It can come from livestock as well as wildlife like elk, deer, birds, beaver – pretty much any animal that poops. And to complicate matters further, only some strains of the bacteria are harmful to human health.

In the early 2010s, however, researchers knew high E. coli levels were an issue in the San Juan River in northern New Mexico, but the question was, who was the main culprit? After conducting two years of microbial source testing, which not only shows the level of E. coli but also pinpoints the exact source, the results were not what researches were expecting. It came back that the largest contributors were … drumroll, please … humans.

In fact, test results showed human feces in 70 to 100 percent of samples taken from the Animas River at the Colorado-New Mexico state line down to the border of the Navajo Nation.

With the guilty party exposed, funding was again secured to take the investigation a step further this summer by understanding where exactly the human waste was coming from, Richmond said. It’s a process that’s rather simple, by testing upstream and downstream of suspected source points, and then seeing where the spikes in E. coli levels occur. And already, there are some potential smoking guns: failing septic tanks from homes and development, outdated wastewater treatment plants and illegal RV dumping.

What the sampling has also shown, Richmond said, is the high E. coli levels aren’t necessarily coming from upstream communities in Durango and elsewhere. Instead, early results indicate the highest spikes happen in and around Farmington.

“This data will help local communities know what their impact is on their waterway … and can be used to inform where clean water projects (should happen) and show us what we can realistically mitigate,” Richmond said.

But that doesn’t necessarily mean upstream communities are swimming in sparkling clean waters.

The Animas River, for instance, has issues all its own. Remember that EPA standard of 126 cfu/100 mL? Well, one study conducted by Fort Lewis College in October 2018 found E. coli levels in the Animas at Santa Rita Park, near the Whitewater Park (close your eyes kayakers and surfers) at 226 CFUs. Bare in mind, this was before the completion of the City’s new water reclamation facility in December 2019.

Jarrod Biggs, the City of Durango’s assistant utilities director, said modern wastewater treatment plants like the new one in Durango easily kill E. coli and other harmful bacteria. But increasingly, there’s a strong environmental sentiment among upstream communities to send the cleanest water possible down to the next town. Already, Biggs said the city’s newly upgraded water treatment plant is showing gains on that front.

“And we think we can do better, once we get it finely tuned,” Biggs said. “I think Durango is being a relatively good steward. We’re trying our darndest to improve water quality and make sure we’re not degrading the river.”

Over in the Florida River, which runs into the Animas about 18 miles south of Durango, progress is also being made, said Warren Rider, coordinator for the Animas Watershed Partnership, which focuses on water quality issues on the Colorado side of the border.

The Florida River for years has exceeded safety standards for E. coli and accounts for nearly a quarter of the bacteria and nutrients dumped into the Animas River before the state line. In a bit of a shock, the Florida was delisted last year, but that was mostly due to a lack of data, researchers say.

While natural sources do account for a portion of contamination in the Florida, agriculture and livestock operations also contribute a good amount of harmful bacteria. As a result, Rider said the Animas Watershed Partnership has tried to work with landowners to fence off waterways to livestock and reestablish vegetation along stream banks.

“We’ve seen nothing but success,” Rider said. “They want to do right by the river. And as an overall approach, we’re asking, ‘How can we have the best impact?’”

Up in the high country

And no one has forgotten about the highest reaches of the watershed atop the San Juan Mountains, where an unprecedented increase in recreation, and therefore human waste, has been well noted and nosed in the past year or so.

In the obvious case study, South Mineral Creek – that of Ice Lakes fame – water samples taken above the highest areas of recreation tested at about 22 CFUs. Farther downstream, in a location that would catch all the cumulative impacts of recreation and camping, samples were more than four times as high, at nearly 90 CFUs. (And, it should be noted, South Mineral was closed this year because of fire damage, which likely means levels would be even higher if people were in the area)

“None of our samples were above the threshold for a danger to humans, but it’s still pretty gross,” Magee-Uhlik said. “And just because it’s not a human health hazard now, shouldn’t mean we let it get to that point before getting worried about it.”

“Detecting E. coli levels doesn’t necessarily mean it’s human, but the high concentrations we’re finding are in high use recreation areas,” she said. “Human behavior is complex, but you see toilet paper under a rock, people camping close to water, or camping in no camp zones.”

So what can be done?

For starters, using best practices in the high country, such as burying waste 6 to 8 inches deep and 200 feet away from water, and packing out toilet paper can go a long way. This message is even more important as record numbers of people visit the backcountry, many without a working knowledge of how to protect the very landscape they come to enjoy.

So yes, there’s no quick and easy fix to E. coli issues in the Animas and San Juan rivers, but all these efforts are folded into the long history of communities along the watershed, and the responsibilities they have to one another, Biggs said. It’s an issue that dates back to the 1800s when Silverton would send down water contaminated by mining operations to Durango, and a few decades later, when Durango’s uranium pile sat along the banks of the Animas River, only to be swept downstream.

“We can’t make up for the past, but we can say we’re improving water quality now as a community,” Biggs said.

And some of the biggest victims are those farthest down the watershed, who also have the least voice in the conversation. Neilroy Singer, an environmental specialist at Diné College on the Navajo Nation, joined Richmond on her sampling mission a few weeks ago. He wants to replicate the program for the Navajo Nation, where farmers rely on the San Juan River for farming, drinking water and their way of life.

“A lot of the community is still concerned about what’s in the river and the water they use to sell plants and products,” Singer said. “There’s still a lot of people concerned whether it’s safe.”