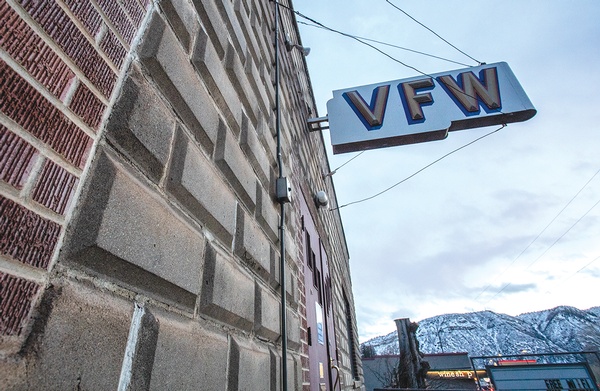 The Durango VFW's iconic neon sign has become a landmark on Main Avenue. Built in 1945, the bricks were hand-made and laid by local veterans from a six-brick mold twice a day./ Photo by Stephen Eginoire

It’s a Main Avenue landmark. For the past 75 years, when most people drive past the squat, grey-stone building along the shore of the Animas River, they recognize it as “the VFW.” What most people don’t see, though – unless they’re a veteran or family of a veteran – is the multi-generational legacy of camaraderie, caring and community that thrives inside. Or the efforts under way to keep that legacy alive for a new and growing generation of veterans.

The Veterans of Foreign Wars was formed in 1899, following the end of the Spanish-American War. The goal was to create awareness about and honor those who served overseas and provide services for them and their families. Today, there are 6,160 VFW posts worldwide with more than 1.6 million regular and auxiliary members.

Durango’s VFW Post 4031 was chartered in February 1945. At that time, a volunteer force of veterans fresh from WWII constructed the building that still stands at 1550 Main Ave. on a reclaimed flood channel above the Animas River.

Local Vietnam veteran John Malarsie’s father, who was a WWII veteran, was among the volunteers who helped construct the building. “The bricks that face the building were made in a six-brick mold twice a day,” Malarsie recalls. “A few guys would come in in the morning and mix the concrete for the bricks. Then another group of folks would come in in the afternoon, take those bricks out of the mold and make six more. Then on Saturday or Sunday, they would come in and put them up until this whole building was faced. It was amazing.”

That teamwork created a building that has held strong for 75 years, much like the organization itself, even if most people don’t see that from the outside.

“The perception of the VFW is it’s just a place where old veterans go to drink and tell war stories,” Post Commander Fritz Shry explains. “That stereotype is also the perception of many younger veterans. But this is so much more than that. We’re a veteran-service and civic organization, and we’re also trying to engage the community.”

The Durango post currently has around 240 members, plus many more auxiliary members who had family in the military. The organization raises awareness of veterans in the region through representation at events like school sports, honor guards at funerals for service members, Memorial Day flagging on veterans’ graves in Greenmount Cemetery and managing the flags on Main Avenue for holidays and events. The 4         VFW also organizes semi-monthly veterans breakfasts at the fairgrounds, although plans are to move it to the VFW once a kitchen renovation is complete.

The VFW building itself has long been a sort of community center, as well. There is a bar, of course, which goes by the military name “the Canteen,” where Friday night karaoke is still popular. But today, the VFW is also home to the Durango Karate Club and a dance group, and hosts a range of community events, such as annual Eagle Scout awards, political gatherings, high school reunions, wedding receptions, bands, parties, quinceañeras and Snowdown events.

In addition to an inside hall with a bandstand and a covered outside picnic area alongside the Animas River Trail, the VFW is adding a second venue by remodeling the basement. As mentioned earlier, it is also upgrading its commercial kitchen.

Despite all the changes, as a new generation of veterans have settled down – “the largest pool of veterans that have been eligible to join the VFW since the Vietnam War,” says Shry – the challenge is making the VFW relevant to today’s vets.

“Part of the answer to that is in something they don’t know that they’re missing,” says Shry. “They don’t yet understand that their life is now missing the camaraderie and accountability of being with like-minded veterans or service members. But how do you help somebody realize that they’re missing something so intangible?”

The answer to that question may lie in fresh additions to the VFW’s offerings, like the All Veterans Ball and Thursday Afternoon Social Club.

“A few years ago, a guy wanted to start a PTSD support group,” former post commander Steve White says. “I said, ‘Fine, but let’s not call it PTSD.’ So it became the Thursday Afternoon Social Club. Anybody is invited, and no one is obligated to do anything. No pressure.”

Shry, who took over as post commander from White in 2017, agrees. “The Thursday Afternoon Social Club has become the heartbeat of the changes that are going on here,” he adds. “It’s like a good-idea factory, like a subcommittee of a committee that doesn’t exist. It’s just where good stuff comes from.”

One of the successful ideas to come out of the Thursday Afternoon meetings is the All Veterans Ball, which was held for the second time this past fall. Along with being a fun and festive night – in a very military way – open to all veterans whether post members or not, the event is also a unique way to unite a range of military experiences across generations.

“For those of us who spent a lifetime in the military, military balls are very formal,” Shry explains. “But for some service members, like a lot of the Vietnam-era guys, they got drafted, went to boot camp, flew to Vietnam, and when their tour was over, they just flew back home and the army let them go. So they never got any of the neat things. This is a way for all of us to share that.”

It’s that spirit of unity, sharing and caring that has made the VFW more than just a building and a bar for 75 years – and which the new and younger leaders of the VFW hope will continue to bring together veterans for another 75 years.

Post Quartermaster Meg Vanasse was stationed for 20 years as an Army helicopter pilot in South Korea, Kosovo and Afghanistan. After retiring from the Army, she moved to Durango in 2014 to earn an accounting degree from Fort Lewis College under the G.I. Bill. In the process, she found an unexpected home at the VFW.

“In the military, you have this community of people who would lay down their lives for each other. And then when you leave the military you come into the civilian world, and it’s just different,” she says. “So coming to a place like the VFW, it’s sort of like, ‘OK, I’m back among people who get each other and help each other.’” 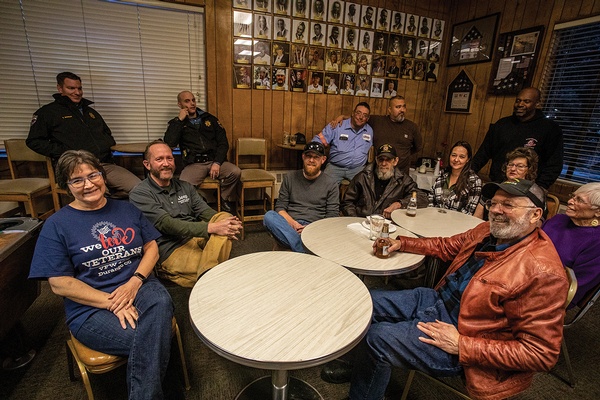 Members new and old gather for the VFW's Thursday Afternoon Social Club, which has become the unofficial "heartbeat" and "good-idea factory" for the Post, according to Commander Fritz Shry./ Photo by Stephen Eginoire