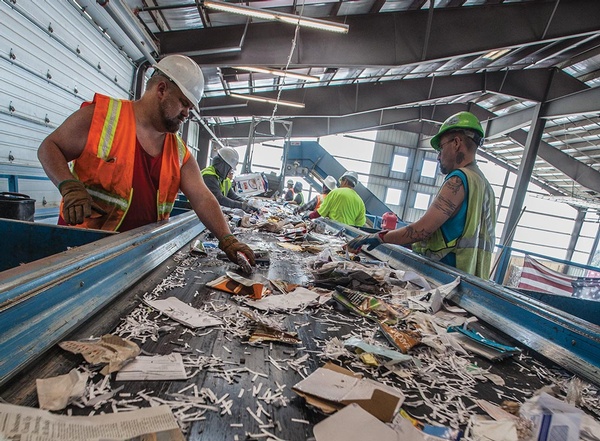 Workers sort single-stream recycling material at Phoenix Recycling, southeast of Durango. Phoenix, unlike the city of Durango, sorts all of its single-stream into mixed paper, cardboard, aluminum and different types of plastics. It's the only facility capable of sorting in the area. The city sends its single stream to Friedman Recycling in Albuquerque./Photo by Steve Eginoire

For decades, people across the United States have been able to consume without consequence. Recycling had become so easy, residents only needed to toss their cardboard Amazon boxes, plastic water bottles, campaign flyers and milk jugs into the blue bins, then drag them out to the curb on Wednesday morning.

After that, it was assumed those products would end up in a place where they could be turned back into more cardboard boxes, plastic bottles, flyers and milk jugs – and with an environmental bonus to boot.

And, in most cases, that’s exactly what happened.

“A year ago, you could buy any package in the grocery store and almost all of them were acceptable in the recycling program,” Mark Thompson, owner of Phoenix Recycling, said. “Now, it’s going to change.”

In the early 1990s, China’s hunger for the world’s waste began to grow – and grow and grow.

Plants dedicated to turning something old into something new sprung up across the southern regions of China. It seemed the country couldn’t get enough cardboard, paper, plastic and other bits of scrap from countries all over the world, including the United States.

Over the past several decades, in fact, China has taken almost half of the world’s recyclable rubbish. (For an interesting read about what happened to recyclables once they reached China’s shore, check out Adam Minter’s 2013 book, Junkyard Plant: Travels in the Billion-Dollar Trash Trade.)

Since all of this waste found a home in China, people in the Southwest – and across the country – became accustomed to tossing everything in the blue bin and shipping it to China.

So, instead of building plants capable of turning a plastic bottle into a fleece jacket, what sprung up in this country were materials recovery facilities, or MRFs. These types of automated plants separate single stream waste into different types of marketable commodities – mixed paper, card-board and all the different plastics. Although there are some plants in the United States that process glass, cardboard, paper and even plastic, what America really became good at was collecting the single stream and separating it.

In this way, China actually shaped the single-stream habits of Americans and the West.

According to Fay Fisk, a regional broker with Centennial Recycling based in Aurora, the first scent of China’s changing winds came in 2013 with the “Green Fence” policy.

Fisk works with companies like Phoenix Recycling to get their recyclables from the blue bin to manufacturers who can to turn bundles of mixed paper into home insulation.

“If you were in the business, you could see parts of it coming,” she said.

Green Fence was an effort to enforce contamination standards set years earlier, and it began with Chinese officials actually inspecting shipping containers as they came into port.

Green Fence did have an impact on the markets back then, but it was nothing the industry hadn’t weathered before. And, nobody really believed it would go too far.

Then came China’s “National Sword” policy in February 2017. It began as a crackdown on illegal waste shipments but soon morphed into a policy change on recyclable imports in the name of environmental reform.

China made things official a few months later when it announced intentions to the World Trade Organization: no more dirty single stream.

This announcement was the real shot heard round the world. Markets began to fall, dirty bales of single stream started piling up, and National Sword started making its way into news cycles in the United States.

Over the past year, China has tweaked its rules on importing recyclables, but it’s nothing that would signal a change in policy. In fact, it’s the opposite.

In March, the country came up with “Blue Sky” – a new name attached to more recycling restrictions. At this point, China will only take recyclable material with a 0.5 percent contamination rate – a standard industry experts like Fisk say is impossible to meet. (As a comparison, the City of Durango is allowed a 5 percent contamination rate with Albuquerque’s Friedman Recycling, the company that sorts the city’s single stream.)

China has also prohibited the import of mixed paper recyclables and announced plans to stop taking other items in the future, like scrap metal.

David Friedman, CEO of Friedman Recycling, said since China’s new policy was implemented in January of this year, the country has bought half of what it typically does, and the value of recyclable materials has plummeted.

“It’s a commodities industry, we’re used to some volatility,” he added. “But this is nothing like we’ve ever seen.”

Friedman’s company has been operating in the Southwest for 41 years. He started sorting recyclables as a teenager and today runs the business with his brother, Morris Friedman.

It’s not just the pure scale of the cut off on Chinese imports or the speed in which things have changed, Friedman said, but the fact that the decision is not driven by the markets.

“It’s a political fabrication,” he explained. “There’s no rationality to it. Who knows what the Chinese government will think of next week? It’s unprecedented.”

In response, material recovery facilities like Friedman’s are looking for new homes for their products. They’ve turned to Vietnam, India, Indonesia, Malaysia, Korea, Mexico and Brazil – just to name a few.

But the truth is without China in the game, the world of recycling and single stream has to change. (The Telegraph examines industry changes – today and in the future – in Part II of this article in next week’s edition).

Taking the hit at home

Communities across the United States are having to deal with the implications of China’s new policy. Some had to adjust their recycling programs, a few have stopped recycling altogether, and others are taking recyclables to the landfill.

The first time the Durango community felt the sting from China’s National Sword was with the $2.69 surcharge added to residents’ recycling bills in June.

With Friedman Recycling struggling to find buyers for its material, the company needed to offer a cleaner product – which means less contamination. It also means they are forced to slow things down and hire more workers to search through the scrap. As a result, Friedman needed to charge the city of Durango $25 per ton just to take its recycling. That cost was passed on to residents in the form of the surcharge.

It’s not something Friedman – or the city – wanted, according to both, but operating costs for the company have doubled since January.

So far, the surcharge is the only thing Durango residents have felt. But things are changing quickly. “It’s a very fluid situation, day-to-day, week-to-week,” Friedman said.

The next change likely coming down the pipe is plastic.

The United States does have some plants with the ability to take quality No. 1 and 2 plastics. The real rub is what’s known as No. 3 through 7 plastics.

What are 3-7s? These plastics are typically thinner, lower-quality and tougher to turn into other products. Some examples are the plastic clamshells used to hold berries at the grocery store, or those flimsy water bottles that fold with the slightest touch.

Phoenix’s Thompson said if it’s not a No. 1 or 2 plastic bottle, he would lose money trying to find a home for it. “But it’s gone beyond that,” he added. “It’s no longer, ‘It’s expensive for me to recycle it.’ Now it’s, ‘I can’t recycle it at any price.’”

Friedman admitted his company does have a backlog of the 3-7 plastics, but he also said they are encouraging their customers, like the City of Durango, not to change their recycling programs – at least, not yet.

“We continue to sort 3-7s, storing the material in our facility,” he explained. “We’re hopeful there will be a viable market; we’re actively searching. But, we haven’t found anything yet.”

The city is preparing in case things don’t change – or get worse.

“We are trying to stay ahead of this,” Durango’s Director of City Operations Levi Lloyd said. “So, if there are changes coming down the pike, we can start getting the word out as quickly as possible.”

One of the reasons the city’s single-stream recycling program has been a success over the years is the tremendous amount of public outreach the city did in the beginning, Lloyd said. Along with meetings, flyers and social media campaigns, city workers took the time to examine bins in the early days of the program and leave notes reminding residents what was – and was not – recyclable.

If the city had to change the program, all that would need to happen again. Lloyd said city officials have already started talking about such a campaign in the likelihood the No. 3-7 plastics get cut out of the marketplace. But, all the players are hoping it doesn’t come to that.

“We’re working extremely hard,” Friedman said. “We don’t want to send anything to the landfill.”

In next week’s edition, coming out Aug. 2, the Telegraph takes a look at how the United States and the Southwest are adapting to China’s National Sword policy and how it might reshape the industry moving forward.

No. 3-7 plastics are typically thinner, lower-quality and tougher to turn into other products. Some examples are the plastic clamshells used to hold berries at the grocery store, or the flimsy water bottles that fold with the slightest touch.