Take me to your leaders
County commissioner creates new nonprofit, bringing the elected West together 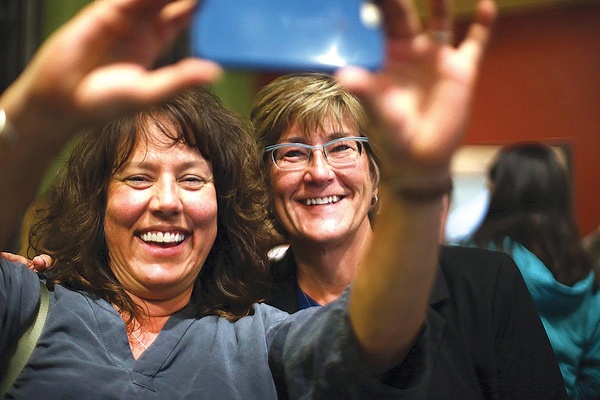 La Plata County Commissioner Gwen Lachelt celebrates with supporters on election night, November 2016. After winning re-election, Lachelt decided one way to make an impact in her final four years was to found the Western Leaders Network, a local nonprofit dedicated to bringing conservation-minded leaders together to make a difference in the West./File photo by Jennaye Derge

It was an early evening in May when the three Western leaders finally sat down at a coffee shop inside the Capitol Building in Washington, D.C. By the time they took their seats, La Plata County Commissioner Gwen Lachelt had already logged more than 33,000 steps on her Fitbit – but, as it turns out, the last few she added may have made the most difference.

Lachelt, along with two colleagues, had spent most of the day trekking up and down the hallowed halls of the Capitol in an effort to convince undecided members of the U.S. Senate – like Sen. Joe Manchin, D-W.V., and Sen. Heidi Heitkamp, D-N.D. – to keep a recent BLM methane rule in place. They were also hoping to catch up with Colorado’s own Republican Sen. Cory Gardner.

As Lachelt sipped tea and scanned the passersby for Gardner’s likeness, she noticed another familiar face – Sen. John McCain, R-Ariz. And, he was alone.

“Go after him,” her companions suggested.

Without hesitation, Lachelt took off down the hall after one of the only Republican members of the Senate who was officially undecided when it came to the upcoming vote. The U.S. House of Representatives had voted earlier in the year to repeal the methane regulations, and the Senate was expected to vote the very next day.

Lachelt was able to catch McCain just before the elevator doors closed. She stepped inside and gave what Don Schreiber, her longtime friend and colleague, called a 3-minute pitch that was 30 years in the making.

Once Lachelt returned to the coffee shop, she told her colleagues that although the Arizona senator hadn’t committed to anything, she felt like he heard her case.

The following day, the Senate voted to keep the methane rule in place by a 51-49 margin. Sens. Susan Collins, R-Maine, Lindsay Graham, R-S.C., and McCain – whose vote was considered by many pundits to be a surprise – joined the Democrats in the majority.

Of course, everyone on the Hill had their own ideas about what tipped the scales for McCain. Some said there was in-fighting among the Republican leadership. Others said it was just another senate feud.

Ask Schreiber, who’s worked with Lachelt on oil and gas issues in the Four Corners for 15 years, and he’d say, “I will go to my grave thinking Gwen was the straw.”

Schreiber is a rancher from northern New Mexico and has been working to create responsible oil and gas regulations and cleanup rules as long as he’s known Lachelt. It’s why she not only asked him to be on the board of the Western

Leaders Network, a new nonprofit she founded, he was the first person she shared the idea with last fall.

The Western Leaders Network is a Durango-based non-profit built on the idea that there is strength in numbers. They bring together local leaders from across the Interior West to address pro-conservation issues.

So, when those public officials come together and combine their influence, they can really make a difference. Schreiber said that is what’s unique about Lachelt’s vision for the Western Leaders Network.

“It’s just like Gwen to come up with a unique and powerful idea that everybody else missed,” Schreiber said.

Before running for the La Plata County Board of County Commissioners, Lachelt had been involved with the San Juan Citizens Alliance and Earthworks’ Oil & Gas Accountability Project, which is how she first met Schreiber.

His ranch, Devil’s Spring Ranch in Gobernador, is at ground zero of the Four Corner’s methane hot spot.

The hot spot was first discovered in a 2014 image captured by the National Aeronautics and Space Administration. The high concentration of methane, which is the prime component of natural gas, hovered over the Four Corners like a glaring red flag.

With more than 35,000 oil and gas wells in the region, its existence wasn’t a total surprise. The concentration level, however, was. It’s the highest in the nation.

After that revelation, Colorado enacted state regulations to address the issue. It seemed to be working and even became the model for federal rules put out by the Bureau of Land Management last year.

For those who supported the BLM methane rule, the most important aspect of it was the fact that those rules – unlike Colorado’s – could be implemented in the entire Four Corners region and really have an impact on the methane hot spot.

“We have so many wells around our ranch,” Schreiber said. “We’re kind of airmailing the bad air to you.”

Unfortunately for the Western Leaders Network, the victory in Congress over the BLM methane rule was short-lived. The federal agency recently announced it was going to postpone implementation of the rule indefinitely, essentially bypassing the congressional vote to keep it in place.

Lachelt said she’s been here before, though, when one White House starts repealing all the things another had worked so hard to accomplish.

A similar thing is happening with national monuments. Under an executive order, signed this April, almost a quarter of the country’s 117 national monuments are scheduled for review by the Department of Interior. Following the review, those monuments could be reduced in size or their designations rescinded altogether.

The list includes one of the Southwest’s treasures, Canyons of the Ancients. Also on the list of 27 monuments is the most recent addition, Bears Ears National Monument in Utah, a designation made in the final days of former President Barack Obama’s administration.

Regina Lopez-Whiteskunk, who serves on the Western Leaders Network board as a public lands advocate, worked on the Bear’s Ears intertribal coalition during the Obama years and is a former member of the Ute Mountain Ute Tribal Council.

For her, the conversation about public lands became something much bigger when she was involved with Bears Ears. Protecting lands in the Southwest, she said, means just as much to a family in Maine who will one day visit, as it does to a family in Durango who calls the area home.

“Public lands belong to everybody,” she added.

According to the Western Leaders Network, 113,000 comments have so far been submitted to the Department of Interior on the proposed national monuments under review. More than half of those were specific to Bears Ears, and those numbers were just through the end of May.

Lopez-Whiteskunk urged people to keep commenting and share their stories before the July 10 deadline. “Tell your story ... communicate how the areas need to be protected,” she said.

Taking action, though, is only part of what the Western Leaders Network is doing. Another part is education.

When it comes to public lands, for example, it’s not just about protecting those lands for generations to come. Tourism, trails and open space bring in billions to the Western economy, Lachelt explained.

Outdoor recreation accounts for $887 billion in consumer spending each year, according to the Outdoor Industry Association. It’s those types of numbers, Lachelt said, that can help the West weather the boom and bust of oil and gas revenues – and change what it means to rely on natural resources.

With only a few months under their belt, the Western Leaders Network hasn’t even scratched the surface, according to Lachelt.

In the coming week, they’ll have their first board meeting to discuss long-term goals and future issues. The following week, they’ll host a launch party, High Tea & Champagne, on Thurs., June 29, from 4-6 p.m. at Eno Wine Bar, 723 E. 2nd Ave.

With many other Western leaders to reach out to and one important elevator conversation to their credit, who knows what leaders in the West will accomplish next – especially when they do it together.