The AirBnB apocalypse
Believe it or not, Durango has a housing success story 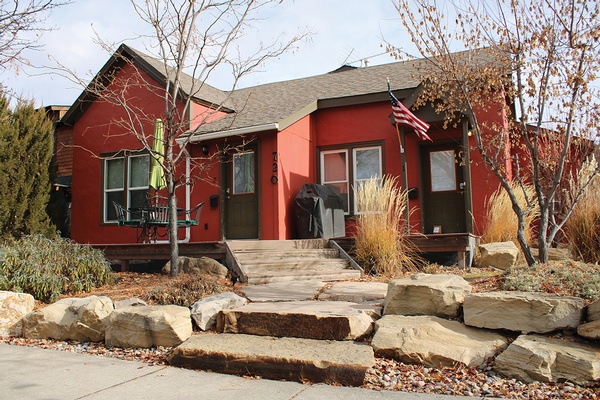 Years ago, the city of Durango planned for the coming popularity of short-term vacation rentals by putting a cap on the number allowed in town, and where they could be located. Now, only a small portion of Durango homes are offered on sites like AirBnB and VRBO./ Photo by Jonathan Romeo

As communities across Colorado grapple with an onslaught of short-term vacation rentals through sites like AirBnB and VRBO, the city of Durango, oddly enough, is far ahead of the game when it comes to keeping the popular rentals in check.

Years ago, Durango city officials had the foresight to guess that short-term vacation rentals were going to be the next big thing. And as a result, a years-long, collaborative planning effort reached a compromise on regulations that put a rather strict cap on the number of short-term rentals allowed in town and areas in which the units could be located.

That’s not to say the housing situation in Durango isn’t a nightmare, because it is. According to the latest data, the median home price is $650,000 in the town of Durango and $538,000 in La Plata County, both up about 20% from this time last year. Increasingly, longtime locals are being pushed out, essential workers like teachers and doctors can’t find housing and, ya know, it’s all kind of altering the character of the town.

But the good news is that Durango avoided even worse problems by reining in short-term rentals before the situation got out of hand, which is happening in so many mountain towns.

Around 2007, the city of Durango began a larger effort to update its land-use code, and with short-term rentals splashing onto the scene, city officials decided to nip the problem in the bud. At the time, Estes Park, for example, had seen almost half its housing stock disappear into vacation rentals.

“To see these horrors going on in other communities, we said, ‘We really don’t want to see that happen in Durango,’” Dick White, a city councilor at the time, said.

The idea, essentially, was to cap the number of short-term vacation rentals in town but also limit where in town the rentals could be located. Keith Brant was a city councilor at the time, but he also owned Durango Premier Vacation Rentals, so he had a stake in both sides. But even though his business is predicated on vacation rentals, Brant said, ultimately, the city landed on a good compromise and healthy balance of available units.

“I think we did a good job saying, ‘We don’t want every home in town to be a vacation rental and we want to protect our neighborhoods,’” Brant said. “And we did that. We’re never going to have more vacation rentals in Durango than we have now.”

So quickly, here’s how it works. A short-term vacation rental is defined as a unit rented out for one to 29 days at a time. Then, short-term rentals are allowed in only two residential zones in Durango – basically the downtown grid as well as neighborhoods around West Second and Third avenues. In areas like Riverview, Animas City and Crestview, AirBnBs and VRBOs are not allowed.

The regulations, finalized in 2014, set the cap at about 2-3% of the total homes in the neighborhood. So, in all, there’s about 120 active vacation rentals in Durango. But, because of the codes, only 40 or so are in residential neighborhoods, about one per block face, which prevents a high concentration in one specific area. The vast majority are located in mixed-use buildings like the Jarvis condos at 10th & Main Ave.

If you want to buy a house and turn it into a short-term vacation rental, there’s a waitlist, but available permits don’t turn over very often – only one or two units a year will give up a permit, which is then available for the next in line. The city of Durango also closely inspects to make sure people are operating legally. In 2020, for example, the city found 11 units not permitted and sent warning letters. In the past four years, only one instance required court action and a fine.

This process, according to Dan Armentano, a planner in the city’s community development department, has been wildly successful in limiting the number of short-term vacation rentals in Durango, therefore keeping those units available for people to live in or rent long term. It also stops someone from coming in and buying up a swath of homes for profit. And, through the permitting process, the units can be taxed properly.

“In Durango, we have this issue well under wraps,” Armentano said.

In fact, Armentano fields calls on a regular basis from other communities in Colorado and across the West on how the regulations work. In Steamboat Springs, for instance, about 40% of units are short-term rentals, compared to just 1-2% in Durango.

“We get a lot of inquiries from other communities dealing with this issue to get some information on how they can emulate our model or at least how we approached it,” Armentano said. “It’s indicative of how effective our regulations have been to this point.”

Indeed, communities across Colorado are struggling hard to reign in short-term rentals, especially as the units become even more popular amid the COVID-19 pandemic, which caused many people to prefer the privacy of a short-term rental through AirBnB or VRBO to a hotel.

In Frisco, the town was receiving about 10 license requests a week for new short-term rentals. Residents started a petition to ban some short-term rentals to help ease the housing crunch. While the petition failed, Frisco’s Town Council is considering a cap on new units and likely to vote this April to create a new tax. If passed, it would generate about $1.8 million a year, some of which could be used for affordable housing projects.

In Telluride, which has 790 short-term units, a citizen-led effort sought to reduce that number to 400 and create a lottery for permits. Ultimately, the town voted this fall for a two-year moratorium on new rentals. “It has reached a crisis level,” San Miguel County Commissioner Hilary Cooper said at a state task force meeting in October. “Short-term rental regulation is not going to solve this problem, but it’s one of the approaches we need.”

In an interview with The Durango Telegraph, Crested Butte Mayor Ian Billick said his town put a moratorium on new short-term rentals while a task force reviews its options for regulatory changes, all part of the town declaring a housing crisis this spring.

“Housing was a problem before the pandemic, but obviously, it became worse,” Billick said. “Everyone agrees it’s a housing crisis for our community. We need the essential workforce taken care of, and at this point, it’s a question of how most effectively to do that.”

So yes, Durango’s housing situation is scary for most normal people – prices continue to rise and most new homes being built are luxury estates. But hey, imagine how much worse it would be with an AirBnB/VRBO free for all. “With all the issues impacting our housing shortage, this isn’t one of them, because the town had the forethought in 2014,” Armentano said. “But yes, we do still have a significant housing shortage.”

And La Plata County itself still has to tackle short-term rentals. The county currently doesn’t have regulations but plans to start drafting codes next year, especially because some units are not being taxed, said spokesman Ted Holteen. One estimate showed there are around 800 units in the county. “The commissioners have this issue on their radar for 2022,” he said.

So, give Durango a pat on the back for taking care of the short-term rental problem. Now, about those second and third and fourth homeowners…