The river of lost flows
Is the Animas drying up? A look back at the dwindling last century says yes 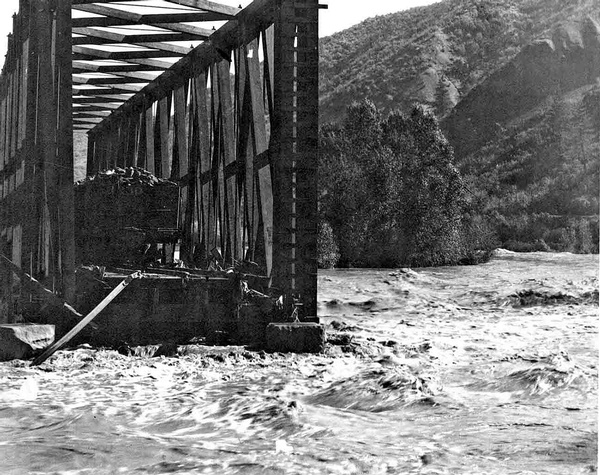 The 15th Street Bridge on Oct. 5, 1911. Durango & Rio Grande railroad moved several gondolas loaded with coal onto the bridge to keep it in place. It didn't help. Miles of the railroad tracks were washed out. The D&RG contracted with Otto Mears in Silverton to rebuild the tracks to the south out of Silverton while D&RG crews worked their way north. The railroad was shut down for nine weeks. / Photo and historical information courtesy the Animas Museum

Another winter with below-average snow pack. Another spring with low runoff. Another shortened season for Durango’s beloved water sports. When will we return to normal? I hope you’re sitting down; I have some bad news.

The American West is stricken by drought. That is not news. For the past 20 years, moisture levels have been abnormally low in the region. Shriveling crops, raging wild fires and diseased forests are just some of the fallout. Now scientists fear we may be on the verge of a megadrought – a long-lasting period of greatly reduced moisture. The last megadrought was in the 1500s and lasted some 50 years. Past megadroughts were naturally occurring. Their causes are complex and not completely understood. What scientists do understand is that the present drought has been worsened by anthropogenic (human caused) warming. That’s right, our old friend global warming has worsened our present drought by 30-50 percent. How bad could it get? The past 20 years contends with any 20-year period in the last 1,200 years for the severity of drought. That is some bad news.

The San Juan Basin drainage has been especially hard hit. The Animas River shows decreased flow not for the past 20 years, but for the past 30 years, since the early 1990s. In fact, discounting the abnormally wet 1980s, the Animas River has been steadily losing flow since the beginning of record keeping in the 1890s. The history of a single river graphed on a chart is notoriously hard to plumb for trends. Too many years buck the norm presenting a confusing welter of peaks and troughs. But dive deep enough and the evidence is there. The Animas River is not doing well.

On Oct. 5, 1911, after days of heavy rain, the Animas River came roaring out of its banks. It peaked at 25,000 cubic feet per second (cfs) which was 11 feet deep measured at the station near the power plant. The water reached the top of the arches on the Main Avenue Bridge. The monster runoff of 1911 set the record –since records have been kept – for peak run off of the Animas. Jump ahead to 1927 – a freakish combination of late snow melt and an early monsoon rain June 27, 1927, lashed the river to its second-highest historical level: 20,000 cfs and 9.65 feet.

Old timers will remember the 1970 flood, a rogue year that came out of nowhere. Torrential monsoon rains on Sept 6, 1970, pushed the Animas to 11,600 cfs and 8.3 feet. That year was the last time the river flooded the width of the Animas Valley.

Peak flow is flashy. It makes stunning photographs. It puts people on the river and pictures in the paper.  But it’s a flighty thing, much like spring itself. Peak flow does not water crops or nurture cities. That measurement is annual discharge – which is measured in thousand acre feet, or k/a/f. One acre foot is one acre covered to a depth of 1 foot. Years with increased annual discharge tend to clump in approximately 10-year segments, and hydrologists use a 10-year running average for a river’s historical flow. To speak of a single year as indicative of above or below average can be misleading. There are always rogue years that spike or plummet outside the years adjacent to them (like 1970.) Also, as river flow is trending lower, the historical average is pushed ever downward. There have been three 10-year periods with higher than normal annual discharge in the historical record of the Animas. Our champion, 1911, and runner up, 1927, bracket the first period. Sadly, both of these years, as well as two other years in this time frame, are missing annual discharge numbers. Nevertheless from 1913-25, the average annual discharge was 750 k/a/f, that’s three-quarters of a million acre feet per year. This number would be significantly higher if the freakish floods of 1911 and 1927 had been included.

For comparison, from 2010-19 the average annual flow of the Animas dropped to 496 k/a/f, a staggering 34 percent decline from the average flow a century ago. If scientists are correct – and we are entering another megadrought, aided and abetted by global warming – the future of the Animas appears grim.

In the past Durango survived the loss of its smelter. A present controversy over the coal-fired train continues to tear at the town. What is Durango’s future with an Animas River reduced to the size and ferocity of an irrigation ditch? How does that impact Durango’s self-image? Where then will lie the soul of el Rio de las Animas Perdidas? Along a dry river bed? 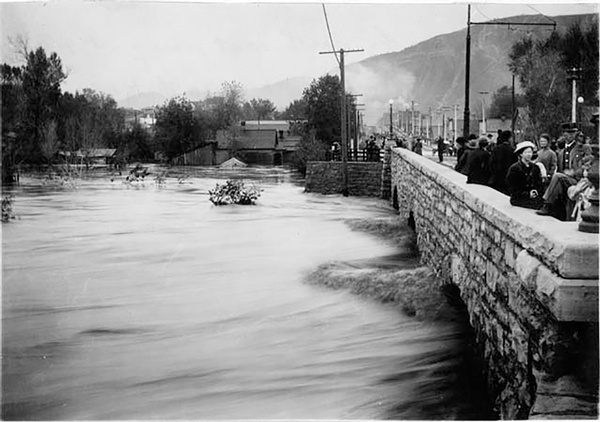 Spectators line the Main Ave. Bridge near what is now Rotary Park on Oct. 5, 1911. That year was a wet year, with heavy snows in the high country and heavy rains through the summer. On Oct. 4, a gentle rain started. The storm picked up intensity overnight and dropped 2 inches of rain on Durango. That was more than the average rainfall for the whole month of October. It was still raining Oct. 5, and since the earth was saturated, the water was unstoppable. It was estimated the flow in the Animas River was around 25,000 cubic feet per second (cfs) that day – the highest flow ever recorded on the river./Photo courtesy Center of Southwest Studies