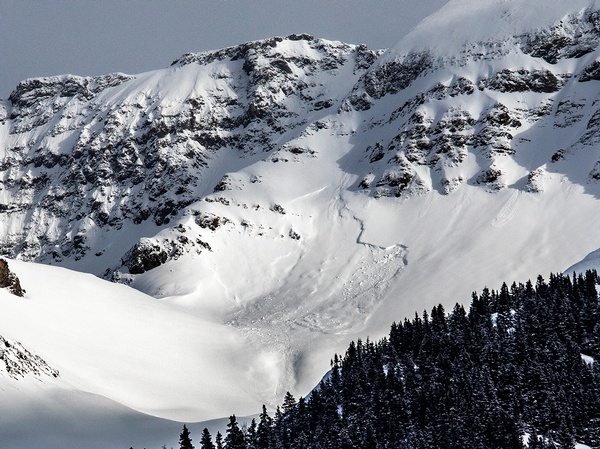 An avalanche that occurred on Emory Peak in the San Juan Mountains this past winter./Photo by Stephen Eginoire

Following a tough winter season with record snowfall and avalanches, backcountry experts in the Southwest are turning the corner with the Four Corners Snow and Avalanche Workshop. The full-day of avalanche education and stories shared by legendary backcountry experts takes place Sat., Oct. 26, in Silverton.

“It was a trying year,” Michael Ackerman, recreational programs director for the Silverton Avalanche School, said. “We came out of it pretty banged up ... this is a new chapter moving forward.”

By the time spring hit full swing this year, many parts of Southwest Colorado were still reporting snowpack levels at 150-200 percent of average. According to Ackerman, experts were calling it an event that only happens every 300 years.

“Most professionals say we won’t see this again in our lifetimes,” he added.

After several years of dusty summer days and dry winter months, many were happy to see the flakes fly – but, the pace at which the storms came brought a new problem.

“Mother Nature likes things on a simmer,” he explained.

Anything that happens quickly, like rapid snowfall or temperature changes, can tip the balance.

After the first of the year, the Southwest was battered by storm after storm – most being measured in feet instead of inches. The snow quickly piled up with no time to settle before the next system moved in, and it was that intensity that broke the camel’s back.

That’s what happened in March, Ackerman said, when Red Mountain Pass closed for more than two weeks after an avalanche buried the roadway in several feet of snow.

“The unique thing about our mountains is we tend to preserve weak layers or problematic layers,” he added. “Eventually, you tip the balance.”

Statewide, 46 people were caught in avalanches over the 2018-19 winter season and eight people died, including one student with the Silverton Avalanche School.

It happened Jan. 5 during a Level 2 course for advanced backcountry skiers near Red Mountain Pass. According to a report from the Colorado Avalanche Information Center, two avalanches were triggered and all six skiers in the group were caught in the slides.

One of the skiers, the school’s instructor, was buried by the first slide and survived.

Peter Marshall, of Longmont, however, was buried under both avalanches. His death was the first avalanche fatality of the season in Colorado, and the first in the school’s history.

When asked about what happened, Ackerman said he’s still seeing things from an 80,000-foot view. It often takes time for people to talk about and share these types of stories, he added. And, in time, this story will also be remembered and shared.

In the weeks and months that followed, Ackerman said he walked into conference halls and meeting rooms wondering if the only thing on the mind of his colleagues was, “There’s the guy from Silverton.”

Instead, what he felt from others in the industry was understanding and empathy.

They all know the sport is not safe, he said. The goal of places like the Silverton Avalanche School is to make it as safe as possible, to share information and educate each other in an effort to minimize the risks inherent to the backcountry.

“You’re in an uncontrollable mountain environment,” Ackerman explained. “There’s nothing safe out there.”

The awareness of these risks and a desire to share information is how it all began back in 1962.

In those early days, Silverton residents and local law enforcement started coming together to talk about the avalanche dangers unique to the San Juan Mountains.

Geographical features, like steep terrain, combined with climate and unusual weather patterns create a singularly unique snowpack that has challenged snow scientists and backcountry enthusiasts for decades. It’s this environment that has made the region a key player in the evolution of snow science and development of avalanche education.

“There is no more difficult snow climate,” Ackerman said.

He explained that was the genesis for the Four Corners Snow and Avalanche Workshop – bringing the backcountry experience and industry expertise to the spot with these unique challenges.

This weekend’s workshop aims to both pivot toward the future and honor the past with speakers like Betsy and Richard Armstrong, who called Silverton home for seven  years in the 1980s, and are considered pioneers in avalanche research and snow science.

“Having the Armstrongs come back,” Ackerman said, “to me, it feels like the story’s coming full circle.”

He’s hoping the event becomes an annual pilgrimage for industry experts in the region for years to come. Unlike other conferences, he explained, this event is intended to be intimate, relaxed and uniquely Silverton.

Earlier this month, alongside about a thousand colleagues, Ackerman attended the Colorado Snow and Avalanche Workshop in Breckenridge. The sold-out event was certainly bigger than the one planned for Silverton on Saturday, but that’s kind of the point. As much as he’d like to see the Four Corners version become a draw for industry leaders and backcountry enthusiasts, he also wants it to be more personal, giving people the time to share their stories and their expertise.

Coming together as a community is one way to learn and grow from a difficult winter season, Ackerman said, and the workshop is meant to foster that with region-specific education, social gatherings and more.

“There’s going to be a lot of storytelling,” he said. “Then we’ll put our heads together and plan for what’s to come.”

What: Four Corners Snow and Avalanche Workshop
When: Sat., Oct. 26; registration begins at 7:30 a.m.
Where: Silverton Public School
To register: Sign up at avyschool.com/product/four-cor ners-snow-and-avalanche-workshop-october-26th-2019/ 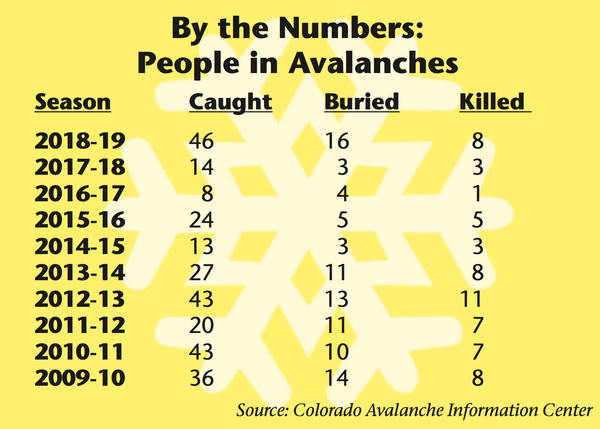 When the snow melts 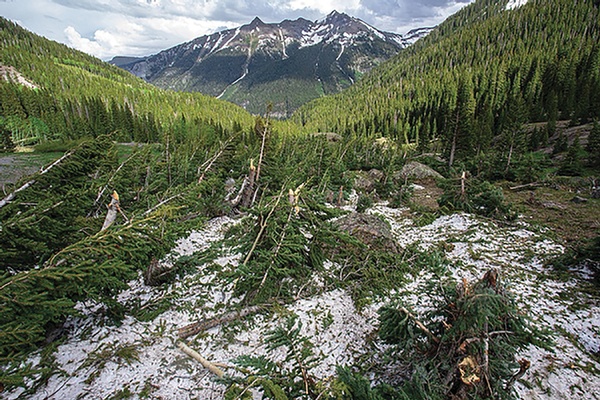 Just because the skis are put away doesn’t mean the season is over at the Silverton Avalanche School. Trails littered with broken and downed trees need to be cleared. High-elevation glaciers continue to be studied for potential slide risks. The terrain, which is often reshaped over the winter by slides and debris, are mapped so avalanche dangers can be assessed for the coming winter season./ File photo