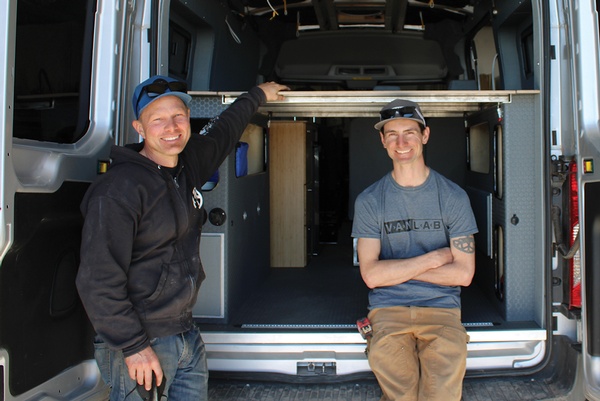 Andy Barber, left, and Gavin McCalden, of VanLab Durango, take a break on the tailgate of a Ford Transit van they are currently working on for a lucky longtime local family. A van aficionado his whole life, Barber eventually turned his passion for camperizing vans into a full-fledged business./Photo by Missy Votel

Before we can begin the interview, Andy Barber would like to address one glaringly obvious topic: the mullet. It was not his idea but his 11-year-old daughter, Opal’s.

“I told her this was her one last chance to give me a mullet for COVID because I didn’t cut my hair,” he said. “She hacked into it this weekend.”

She did a good job – if by good you mean bad – giving him a definite Patrick Swayze “Roadhouse” vibe. Barber admits this isn’t his first mullet. He had one for real during high school, in the ’80s – which, for some reason, he readily admits to.

But Barber isn’t just a pioneer in the, uh, “hair arts” – one could consider him a pioneer in the camper van arts, too. In 2019, Barber, along with partner Gavin McCalden, started VanLab Durango, offering custom buildouts for Sprinter-type vans. But Barber, a surfer who grew up in the Pacific Northwest, started his love affair with vans long before the latest craze in recreational vehicle-ing (if that’s even a word).

“#Vanlife started for me at the young age of 16 … the family Toyota van was my first vehicle. It wasn't long in my possession, as my brother got it stolen on a surf trip somewhere near the Baja peninsula,” he recalled.

Thus began a long and not-always-so-illustrious affair with the boxy adventure rigs. Some may recall him cruising around town in his semi-notorious dark red van, the “Red Devil,” which later found a home at 2nd Ave. Sports. In 2003, he upgraded to a white Mercedes Sprinter, among the first to hit American shores, not to mention Durango’s.

“I got the first model Sprinter made in America, one of only a few in town,” he said. “It was semi-horrible; it broke down a lot.”

Then came more Sprinters, a Dodge Promaster and eventually a few Ford Transits. For Barber, graduating from regular conversion vans to the taller cargo vans was born more out of necessity than anything. “I wanted a van where I could stand up inside,” he said. “I wanted to be able to go to Baja and not have to slide on my knees to get in and out.”

So Barber, a carpenter by day, began building, tinkering, modifying and upgrading. Eventually word got out, van envy spread, and he was doing vans for friends, and friends of friends.

A bit of an oddity at first, today the Sprinter (used here in the generic sense) is nearly ubiquitous on every American road from Yellowstone to Moab, Baja to the Yukon. Sure, people have been van-venturing since Shaggy and Scooby first fired up the Mystery Machine, but the Sprinter was a breakthrough in that it was the first van with factory all-wheel drive, opening up a world of nimble possibilities previously off-limits to lumbering recreational vehicles or tow-behinds. In recent years, it has been joined by the Dodge Promaster (still only available in 2WD) and the AWD Ford Transit, which comes in at about $15,000 cheaper – a relative term – than the Sprinter and runs on gas as opposed to diesel for its pricier German counterpart. (Speaking of which, you can really geek out on the differences between the Ford and the Sprinter, a conversation we’ll save for another day.)

But the best part about the vans is that they arrive like blank slates, ready to fulfill your wildest tiny-rad-house-on-wheel dreams, from solar panels and mini fridges to hydraulic rising beds and A/C units. Which is where VanLab and a handful of other local shops come in, including Wanderful Wheels, Topo Rigs and San Juan Vans. (If you also do van outfitting and I have missed you on this list, please forgive me. I am just a girl with a keyboard and an internet connection.)

For a while, VanLabs was a side hustle to Barber and McCalden’s main gig, Counterkulture, which fabricates custom concrete countertops – both of which operated out of the same space in the Durango Air Park. But eventually, as more vans started rolling in, things got tight.

“It was crazy, in order to cast concrete, you would first have to move this van out of the way,” McCalden said. 4

After an exhaustive multi-year search for a large enough space for both businesses, the men finally got a lead last spring on a space for rent nearby, more than double the size.

And then the pandemic hit.

“We thought, well now what do we do? Is the world ending? Is anybody even going to be buying vans?” said Barber.

The men thought about scrapping the van side of the business all together, and that’s when they decided to take the advice of friend Gary Provenchar, owner of 2nd Ave. Sports, to “sink or swim.” Last June, they signed the lease, moved operations and started stockpiling van outfitting materials like sheets of bamboo plywood, aluminum and windows – at least when they could get their hands on them due to building supply shortages.

And, well, we all know what happened after that: as indoor venues closed, outdoor recreation boomed. Before long, the phones started ringing – and haven’t stopped.

“We literally had the conversation, like, ‘It’s over, the van part. No way is somebody going to actually spend the money it costs on these vans,” said McCalden. “And then, sure enough, everyone wants a van.”

Currently, VanLab is booked until next fall – which is OK, since apparently there are no cargo vans for sale anywhere in the world right now. Some of their customers are coming from as far away as the East Coast for their “pimping,” if you’ll pardon the MTVism. Although the average outfitting costs about $30,000 – a pretty penny for the average car-sleeping dirtbag – it’s justifiable, according to Barber and McCalden. For starters, each van requires about 400 hours of labor. And if you’ve ever tried to work on the inside of a van, you know, it’s sort of like a jigsaw-human-Jenga measuring mission impossible, no matter how many Youtube videos you watch.

“If you look at the vans, they’re round from front to back and on the inside. They’re bulbous and weird,” said Barber. “A lot of people say, ‘$30,000, wow, that’s a lot for the inside of a car,’ and we thought, ‘wow that’s a lot of money for the inside of a car,’ but it’s more than that,” said Barber “It’s harder to build than your house; it’s not square. Every van is different, and everything has to be tweaked.”

And then there’s the detail that goes into making everything light, compact, useful and, of course, bomber. Oh, and it has to look good. All in a space no larger than the average master closet.

“You’re basically building something inside 100 square feet, so it’s got to be dialed,” said McCalden.

To help with the tedious labor, they recently bought a CNC cutter and have hired more hands on deck. Which is a good thing, because by the looks of it, vans are not going away. Add to that the introduction of electric vans by next year and the growing population of active retirees with disposable income, and this whole van thing is really on a roll.

“It’s not just skiers and bikers anymore,” said McCalden. “My father-in-law, he drank the Kool-aid. He realized he doesn’t like driving this giant RV around. You can drive and park a van wherever you want. You can take it to the grocery store.”

Which is fine – just as long as you’re on your way to somewhere fun. 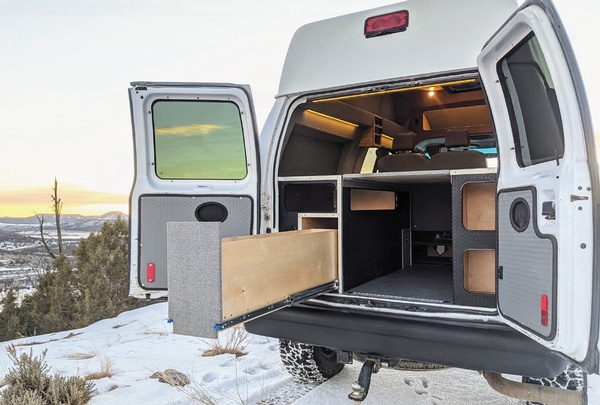 Although the bulk of thier business is Sprinter-type vans, VanLab also has been known to work on anything from Airstreams to McCalden's 4WD Ford 350, seen here. The van includes a custom pop top that McCalden tracked down in California as well as side bumpouts that he welded himself to accommodate his 6'1" frame sleeping crosswise./Courtesy photo