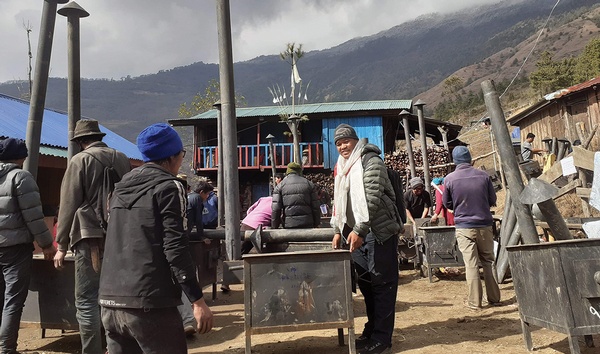 Head Sherpa Pasang Nuppa with but a few of the 150 stoves that were recently delivered to the Bhotkola region of northeastern Nepal. The stoves, which totalled $500 each, were paid for through donations from the locally based Bhotia Foundation, run by Himalayan Restaurant owners Karma and Jyamu Bhotia./ Courtesy photo

This is something Durangoan Julie Korb learned firsthand during a 2019 trip to Nepal. Korb, along with her husband and three children, friend Stephanie McGee and her husband, local herbalist Deb Swanson, and Karma and Jyamu Bhotia traveled to the small country as part of a service trip with the nonprofit Bhotia Foundation. The group visited Jyamu’s home village of Chyamtang to discuss women’s health issues, something that is often taboo there, as well as offer up herbal remedies using Swanson’s expertise and Korb’s background as a biology professor at Fort Lewis College.

However, upon arrival, they discovered a whole other set of challenges. The Nepalese tradition is to have open fires inside their homes, for warmth, cooking and religious reasons. But these same fires that had helped sustain them spiritually and physically for millennia were also doing harm.

Korb, who suffers from asthma, described the inside of the homes as similar to what Durangoans’ experienced during the Missionary Ridge and 416 fires. “It was like when the smoke would drop at night and it would be so, so thick even inside our houses,” said Korb. “They live with it 24/7. It’s so damaging, everyone is breathing this intense smoke.”

Often, Korb would have to leave homes she was invited into because she couldn’t breathe. And she wasn’t alone – many of the villagers suffered ill effects from the smoke as well, from vision problems to respiratory ailments like asthma.

For Jyamu, making the village smoke-free had been a long-term goal. And now, thanks to the generosity of local donors, the smoke that has long been a necessary but detrimental part of life in these remote villages is finally clearing. Last month, some 150 custom-made cast-iron stoves were delivered to Chyamtang and other nearby villages in the country’s northeastern Bhotkola region, about 15 miles south of Mount Everest.

“It’s been so life-changing,” said Korb. “We thought, ‘What’s the one thing we can do that will have the biggest impact on their lives?’ It was providing those stoves in those homes.”

The stoves, which cost $350 each plus another $150 per stove for the rugged 400-mile journey from Kathmandu, were paid for in part with $25,000 in donations to the Bhotia Foundation. The funds stemmed from a fund-raiser in November 2019, which featured a short but moving documentary by McGee detailing the smoky living conditions.

“Without (Stephanie) being able to convey visually the impact smoke was having on people in the villages, I truly don't think Jyamu's dream of having, ‘Chyamtang smoke free’ would have happened so soon,” said Korb.

However, perhaps the biggest contributor to having the stove idea catch fire was buy-in from the villagers themselves. For the Nepalese, fire is a sacred part of their culture. Many, especially the elders, do not trust a fire they cannot see, let alone one in a strange metal box foisted upon them by a foreigner. As Korb explains, similar projects to provide stoves elsewhere around the world have failed, with the modern contraptions often sitting unused outside the homes of leery villagers.

But in Chyamtang, things were different. The villagers were the ones who approached Korb and the group about getting stoves. Upon leaving, two porter families requested money to buy stoves across the border in China. Two men hiked some 60 miles round-trip, lugging the 300-pound stoves home on their backs, using nothing more than traditional headstraps.

Korb tells the story of a grandmother in one of the families, who, despite having her eyesight damaged so badly by smoke over the years, was still skeptical of the stove. “She didn’t like the stove because she couldn’t see the flames,” said Korb. But eventually, as the smoke abated, her eyesight returned.

“Her eyes no longer hurt,” Korb said. “It was kind of this transformation.”

Eventually, the grandmother came to see the light, so to speak, and word about the life-changing technology got out.

“As others in the community saw how it had changed their lives, they began saying, ‘I want one of those,’” Korb said. “Everyone wants stoves now. I think because it came from within, they embraced it.”

In addition to the health benefits of the stoves, Korb said they have been beneficial in other ways. In the Nepalese culture, females are tasked with tending to the fire all day in addition to gathering the wood. Young girls must travel several miles a day and haul back huge baskets of wood to feed the fires – a time and calorie-consuming job. But the more efficient stoves only require tending every few hours and burn about a quarter of the wood that an open fire would, thus helping to alleviate deforestation as well.

“By having these stoves, it gives women so much power. They’re not working such long days. It’s not a full-time job tending the fires for these grandmas,” said Korb.

The stoves were custom designed with input from Karma, who had them specially fitted with a pipe to deliver hot water to the homes as well. “Now they have hot water without boiling,” Korb said.

The next step, of course, is learning to cook on the stoves, something Karma, who owns Durango’s Himalayan Restaurant, envisions doing once the pandemic is over. Remarkably enough, Chyamtang is so isolated that the coronavirus has not reached it. However, plans by both China and India to continue to build roads in the region – the same roads that helped facilitate the delivery of the stoves – could change all that.

It’s part of the double-edged sword of Western influence in the name of “progress” on remote, indigenous cultures. With the good can come the bad, something Korb admits to grappling with.

“It’s hard because you want them to preserve their culture, but you don’t want them to suffer from diseases like asthma that are so preventable,” said Korb.

But in the end, she said it was a late-night Facebook messages from one of the villagers that reinforced her efforts (and punctuated the progress paradox that a remote village without stoves can still somehow get wi-fi). It was from Pasang Nuppa, the head Sherpa from their trip who has multiple Everest trips under his belt. He had just returned from delivering 150 of the “improve smoke” stoves to Chyamtang and the neighboring villages of Lingama and Gumba. “Thank you very much for you kindly helping hands,” his message said.

For Korb, whose year, in addition to COVID, also saw her 13-year-old daughter, Amara, battle leukemia (now in remission), it was especially good news. “Life is so heavy,” she said. “It feels good to see something uplifting and positive; that something this amazing and beautiful happened in this time of despair.” 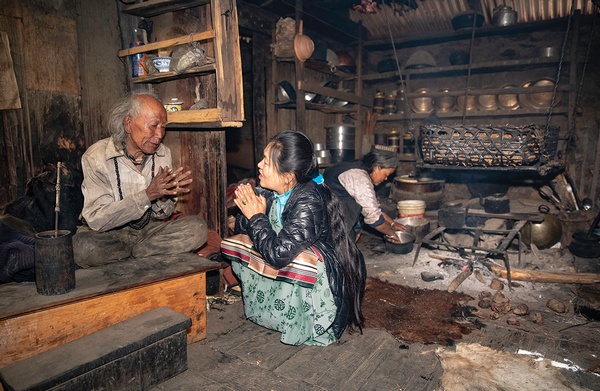 Jyamu Bhotia in the home of her aunt and uncle in her village of Chyamtang in 2019. Jyamu's wish has been a "smoke-free" village. Nepalese use traditional open fires, seen here, in their homes for heat, food and religious reasons./ Courtesy photo

All proceeds donated to the Bhotia Foundation go directly to villagers in Nepal. To donate to the stove project, or any of the foundation’s other projects such as the hot lunch program for school children, go to www.bhotiafoundation.org. If you would like your funds go to a particular program, please specify which one in your donation.