Wildlife success or deal with the devil?
Land swap approved in Southwest Colorado, but not without detractors 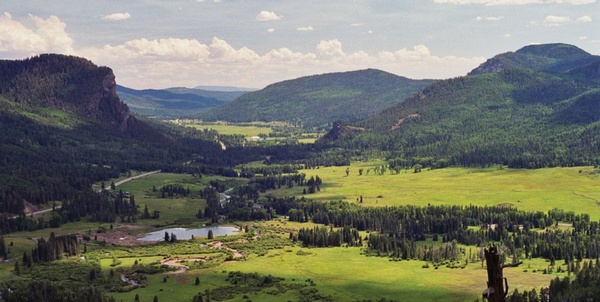 Looking south from Wolf Creek Pass, one can see most of Boot Jack Ranch on the valley floor. Its owner, Kelcy Warren, CEO of Energy Transfer Partners, just added acreage to his estate after successfully negotiating a land exchange with the U.S. Forest Service./ Courtesy photo

The U.S. Forest Service has approved a land exchange with a group of property owners near Pagosa Springs that has sides split: is it a success story for wildlife, or a deal with the devil?

Well, it depends who you ask.

In fall 2020, the Forest Service announced that a group of landowners – including Kelcy Warren, CEO of Energy Transfer Partners (of Dakota Access Pipeline fame) and owner of Boot Jack Ranch, northeast of Pagosa Springs  – requested to give the Forest Service 880 acres they owned south of Pagosa Springs, known as “Valle Seco.” In exchange, they would get pockets of public lands near Wolf Creek Pass and the Blanco River in the South San Juan Wilderness that amounted to about 380 acres in an attempt to expand their estates and private recreational opportunities.

The Forest Service, along with wildlife agencies and hunting advocacy groups, say once under federal control, the 880 acres would be protected as critical habitat for big game, such as elk and deer. Without the exchange, supporters say, the property, which is surrounded by national forest, could be developed and displace animals.

Detractors of the project, on the other hand, argue the wealthy consortium of landowners forced the Forest Service’s hand by threatening to develop the 880-acre Valle Seco property. On top of that, these groups fear the Forest Service has set a precedent for tampering with the Colorado Roadless Rule, which could threaten future public land decisions.

On June 29, the Forest Service released its final decision, approving the land exchange (though it does not become official until the real estate transaction is complete, which is pending).

“Any kind of land exchange that’s done for equal value, you’re going to lose some resources and gain others,” Dave Neely, acting forest supervisor for the San Juan National Forest, said. “It is a tradeoff.”

In 2014, Warren bought Valle Seco, a former inholding (property surrounded by public land), for $4 million. Calls to the Boot Jack Ranch and the project’s representative, Western Lands Group, were not returned.

It appears, however, the landowner group had been looking for years for land it knew the Forest Service wanted in order to initiate a land swap to expand their lands for hunting, fishing and other recreational activities.

Instead, a sort of public land ultimatum was thrown out: hand over the pockets of forest land to expand the private ranches or risk development of the 880-acre inholding. According to federal documents, Warren said if the land exchange was not approved, he’d fence the property, raise elk (which spread chronic wasting disease to wild animals), apply for year-round motorized access and build a hunting lodge.

Warren purchased the 3,100-acre Boot Jack Ranch, about 14 miles northeast of Pagosa Springs, in 2010 for $46.5 million, surrounded by the San Juan National Forest and the upper reaches of the San Juan River. As part of the deal, Warren would acquire three parcels totaling 192 acres. Other landowners include: Linder Ranches (three parcels, 58 acres); and David Skidmore and Cynthia Sites (three parcels, 133 acres).

Over the past two years, the Forest Service analyzed the pros and cons of the swap. The Valle Seco property is indeed a critical habitat for big game in the winter, especially at a time when elk and deer populations are on the decline in Southwest Colorado. And, winter habitat under Forest Service control is in short supply in the region, Neely said (the land the Forest Service swapped was summer range).

Colorado Parks and Wildlife wrote in a letter of support that “this proposal presents a rare opportunity to possibly expand sensitive, high-quality habitat for big game and other wildlife species in southern Colorado.”

The project even has the backing of hunting groups, such as Backcountry Hunters & Anglers and the Theodore Roosevelt Conservation Partnership. Jon Holst, energy and wildlife senior advisor for the partnership, said a study showed big game uses the area around Valle Seco for winter grounds and migration routes.

“It’s just a key piece (for wildlife),” Holst said. “We understand concerns, but from a biological perspective, given how rapidly developing that area is, it’s hard to ignore the benefit to the public to get that parcel.”

Conservation groups and opponents of the swap don’t disagree that Valle Seco is an important habitat. They do, however, take issue with the way Warren and his group went about the process, given the history of wealthy landowners twisting federal land agencies’ arms. Often, by the time the public learns of the exchange, it’s pretty much a done deal, Graham Ward, community engagement director for Colorado Wild Public Lands, said.

“That’s how exchanges in Colorado have been going: private interests purchasing attractive properties and using it as bait,” he said. “Then the Forest Service is forced to play along.”

The land the Forest Service is giving up does include wetlands and riparian areas, as well as some popular camping and recreational spots, especially near the Blanco River. It also includes some areas of the upper San Juan River, which under the swap will lose their potential for a Wild and Scenic designation but will be placed in a conservation easement.

And these groups have voiced concern the process has not been transparent. When a land exchange was proposed for the Hermosa Creek Special Management Area, for example, it took years of public meetings, tours and engagement.

“We have to find a way to get more involved on a proactive basis,” Ward said, “as opposed to reacting when we hear of a new exchange.”

The deal may also conflict with the Colorado Roadless Rule (CRR). The broader roadless rule across national forest lands was adopted in 2001, protecting 50 million acres of habitat and watersheds. As part of that rule, individual states could add protections, which Colorado did in the 2010s.

The Valle Seco land swap gives away about 176 acres of designated roadless area, which opponents say will set a precedent for further weakening of the rule in the future (though it should be noted the Forest Service added 4,623 acres of roadless area in the South San Juan Wilderness).

“This sets a precedent for the Forest Service to manipulate the CRR as they see fit,” Jimbo Buickerood, public lands coordinator for San Juan Citizens Alliance, said. “This is not just about this exchange. This is about the defense of the CRR, too.”

One more area of concern, Buickerood said, is the work of Western Lands Group, a lobbyist group he said specializes in holding public lands hostage (such as the Village at Wolf Creek).

“A huge amount of work has gone on behind the scenes, engineered by Western Lands Group,” Buickerood said. “They’re bending the rules to get this to happen.”

Although groups opposed to the swap are considering legal challenges, Neely said there are conditions within the CRR that allow for adjustments to boundaries, and the Forest Service doesn’t believe they’ve acted outside the bounds of the law.

Meanwhile, now that the exchange is approved, it’s unclear what Warren and his group have planned for the newly acquired lands, whether that means developing the property or just expanding hunting and fishing terrain. Once in private hands, those lands would be subject to the review of Archuleta County’s permitting process.

“The fact is, they have the freedom and right to do with private land as they see fit,” Neely said.

What is clear is that about 880 acres will be preserved and protected for big game, nothing to scoff at amid all the intense pressures on wildlife. In recent years, too, elk and deer populations have been on an alarming decline, in no small part to habitat loss. According to CPW data, elk and deer remain below population objectives.

However, what should (and could) be considered a wildlife success story comes with some potentially concerning caveats of federal agencies dealing with wealthy, influential owners, and the future protections of public lands, Buickerood said.

“This is a case of billionaires bullying the public to get the property they want to expand their ranch into roadless areas,” Buickerood said. “They’re trying to enhance their private holdings at the expense of the public.”