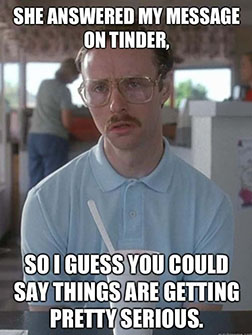 After 10 years of being in a monogamous relationship, I am now dating in Durango, where the odds are good but the goods are odd.

Initially, hoping to meet someone through a friend of a friend, I realized I hardly had any who I didn’t lose in the divorce. If I were to build the remaining relationships, I could not create one where they were just playing wingman, because it wouldn’t foster a real friendship. I needed a solid friend base here first and foremost.

I took a few months asking people out for platonic drinks and saying yes to any social opportunity that presented itself. I bought concert tickets, hung out with coworkers, went to trivia nights and even had seven people over once. But eventually, I knew I was going to have to try something else if I was to meet a lady friend.

Recently, there was a post on the Durango subreddit asking about the dating scene in town for straight men over 35 looking for women. The most common response was that all the men are just waiting for their turn to date the local, single women: “You don’t date, you just get in line,” said two users. Or the angry young man who is sick of the older men hitting on his Fort Lewis College female peers. Or the ever too common: get a dog.

Well, I have a dog, and he is a terrible wingman. For the first time in my life, I joined Tinder.

I swiped through every available woman in a 45-mile radius in one poop. That was it. Maybe 25-30 profiles of women in my age range. Out of that, maybe three or four who might be interesting to connect with, but nothing that really excited me, and many ladies I already knew. However, before I could explore this alternative bar scene, I accidentally “super-liked” a woman before I even saw her profile. She responded, “Do I know you?”

The next day we sent texts back and forth over the course of several hours. The following day we met at Albertsons so she could judge my buying habits, just for something different, before walking the Animas River Trail. The next evening, I stopped by her house to make out. The following night, she came by my house to do more than make out. We continued to text for a week or so until we couldn’t line up our schedules. Then it stopped and that was that.

I still don’t really understand what happened other than I think people are right that Tinder is for hookups. I guess I just “hooked up” without planning to. It was nice and all – for sure – but it didn’t help me in the long term and confused me in the short term. She was strangely an amalgam of all my past loves, so I knew we weren’t going to last, but I thought it would go longer than two weeks.

I deleted my account on Tinder and tried the more “respectable” Bumble.

Again, in one sitting, I was able to swipe through the inventory of my future exes, and all I found were the same women from Tinder with a few extra mothers of four from Farmington who didn’t “need anyone’s money.” But this time I didn’t even connect with a single woman. I clicked yes on a few, but I guess I was not the extreme athlete or yoga master that every woman seems to be searching for around here.

So I gave up dating apps for a while. Then spring started to inspire a fecund optimism in me; the deep loneliness winter had shrouded me in was loosening. I was tired of living in an empty house. There is so much I want to do but want a companion to do it with, so I tried Tinder again.

This time around, I wasn’t going to mess around with having the right pictures to show off different aspects of my life. Nor was I going to say who I was or what I wanted in a direct way. I just posted two pics and wrote a profile filled with hyperbolic exaggeration. Maybe I would find someone else this time.

Tinder is so much like a bar: swiping “a like” is the same as a nice smile across the room, you only get a curated version of the person when you meet them, and you never know what they really look like in the light of day. Not to mention, only certain people go there, normally not the ones you are looking for.

Alas, this time around, I got the exact same women’s attention as the first time and none happened to be a fit for me. One has to pay to message the barflies, so I decided to quit the app. As I was opening Tinder to delete it once again, a new woman popped up and her profile made me laugh. I thought, why not, and went for it. We started texting the next day.

About five texts in, while I was at work, she sent me a semi-nude selfie – the first I had ever received in my life. Immediately, she responded, “Oops. I am so embarrassed. I didn’t mean to send that.” I didn’t know it was even possible to do that accidentally. The jury is still out on that one.

Regardless of intent, she managed to get my attention, and we met that night where I was able to make sure the picture she sent was actually her. It was, and then some. I think she might be onto something with the “accidental” nude. Maybe this is why guys send dick pics, hoping to evoke the same response. I am sure there is a double standard on this one, though.

As to be expected, this one is moving away and won’t become the future Mrs. Jennifer, but it is nice having a sometimes companion while I figure out what comes next. Until then – or when she reads this, I will have to come up with another approach.