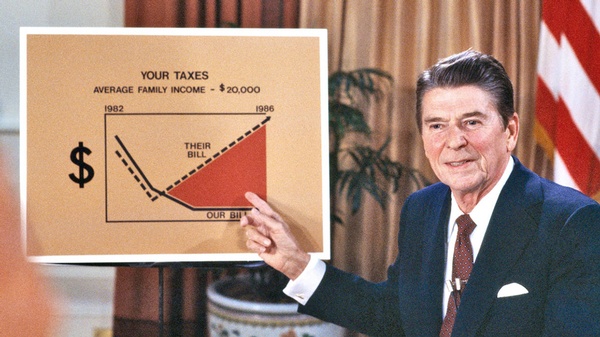 “Money is our madness, our vast collective madness.” – D.H. Lawrence

Some financial news junkies still associate “trickle-down economics” with Ronald Reagan, our 40th president, who popularized a policy of tax cuts for the wealthy because – as the theory goes – the money would eventually find its way to the working class as surely as water moves from higher to lower ground. Back in 1981, like a school teacher, the President provided a big visual chart which he pointed to during a television broadcast, as if it was a chalkboard and the lesson was easy as pie.

But even before Reaganomics, presidents and pundits both endorsed or disavowed this fiscal concept, as far back as 1932 when Will Rogers coined the phrase: “The money was all appropriated for the top in the hopes that it would trickle down to the needy. Mr. Hoover didn’t know that money trickled up. Give it to the people at the bottom and the people at the top will have it before night.”

Unemployed families waiting in long lines for food ought to remind us the economy isn’t working for everyone. Hoarded household staples, a tangled supply chain and our health-care system overloaded to a point of breaking suggests it is time for a new economic metaphor. We are not simply enduring a sluggish trickle down. It’s more like constipation, what I will refer to hereafter as an improperly functioning digestive economy – one where the money that goes in at the top just isn’t coming out at the bottom.

Proper digestion is easier to understand than finances. Wikipedia explains the body’s processing of food as “the breakdown of large insoluble food molecules into small water-soluble food molecules so that they can be absorbed into the watery blood plasma.” Lean times demand a strength of character, but statistical fiscal formulas are hardly food for thought.

Translated into edible terms, the 2017 Tax Cuts and Jobs Act provided a grocery stockpile for the wealthy. The top 1 percent consumed more sirloin, lobster, Black Forest chocolate cake and lemon meringue pie. The rest of us managed to sneak in a slim helping of pizza, rice, hamburgers and cookies even at the height of the good times. You see, if we consider economics biologically, groceries only nourish workers when they reach the digestive system, and if the decimal point isn’t located in the right place, it doesn’t work.

Here’s where the whole thing gets rather messy. I watched Wall Street hemorrhage gains and losses every day for a month and it made me feel queasy, like riding on a roller coaster. But investors and traders survive on a diet of fear and elation, the financial equivalent of an irritable bowel syndrome. It’s a way of life for them, though for the rest of us not a healthy one. The stock market is said to function as a gauge for our economic well-being, but obsessing about Wall Street won’t promote regularity.

A thriving democracy requires cash flow, not speculation, whimsy or self-congratulatory antics. A nation certainly will not survive by depending on that loaf of highly processed and dangerously malleable white bread in the White House. You see, a strong leader nourishes the whole nation. When the electorate advances a glut of rich and fatty foods, the body politic suffers. It’s time for a healthier diet.

In one form or another what goes in must eventually come out, and if it doesn’t, the people at the top should be the ones experiencing cramps, anxiety and that miserable bloated feeling. They never do, though when resources are distributed fairly we all grow a little stronger. Real food provides energy, shelter bestows safety and a genuine education imparts the insight to recognize the difference between healthy diet and a fast snack political convenience food.

Trickle-down shifts very little to those who need it. A modest individual tax reduction like the one passed in 2017 impersonates a cafe’s daily special because it is designed to quickly expire. The corporate tax breaks, however, were significant, and they were legislated to be permanent, which means the old axiom is true: the top can have its cake and eat it too. In order to maintain the practice of feeding the overfed, workers are expected to put more and more from their pantries back into the government cupboard.

Digestive economics has one special advantage over any other strategy. Generally, you know when you’re full. Maybe if we thought of our nation’s wealth as food, opening the larder and sharing the bounty would be so much more satisfying than the continual struggle to upgrade the vault’s security system. Food offers a fresher metaphor. Of course, locked away or hoarded, even food spoils, which is when it should be used as fertilizer.