Being the invisible Indian
Word by word, story by story reclaiming Indigenous dignity and humanity 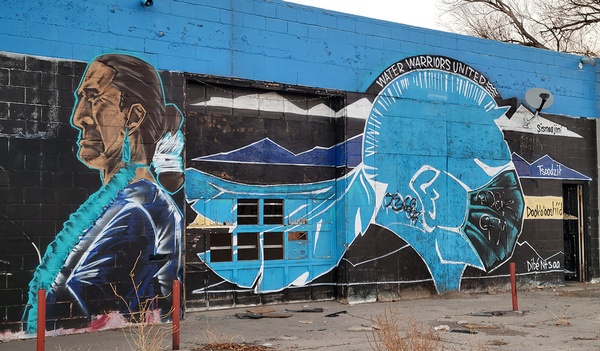 Sometimes I become the vanishing Indian without even trying. It usually happens when the ego of whiteness insists on speaking for my people’s history and experiences.

Recently, I was in a crowded room where people gathered to hear a celebrated white author promote his latest book of adventures in the Southwest. For inspiration, he often leans on Indigenous cultures and stories. During the Q&A, some audience members asked him how he rationalizes such cultural appropriation in his work. “Even though I’m not from those communities, I’m still from this land,” he said while standing on stolen land. If that wasn’t curiously crude enough, he then applied this strange analogy: “I’m not a mathematician, but that doesn’t stop me from learning about math.”

To hear Indigenous peoples’ cultures and stories compared to something as standard as math left me speechless. In that moment, my presence was omitted in just a few words. Disenchanted, I sighed and vanished during the thunderous applause for him.

That strange and upsetting experience brought to mind other uncomfortable moments. Once I had the opportunity to meet a historian I fairly admired. This Finnish scholar often devoted his research to Indigenous history, which, at the time, I found intriguing. One night his publisher invited me and some colleagues to dinner, and as gifts we were given copies of his latest book, focusing on the Lakota. Out of curiosity, I asked him what Indigenous Nation he planned to write about next. “Well, it’s hard being a white historian now,” he replied in a pitiful tone. “People from these cultures want to write their own histories.” For a second, our table went silent as everyone waited for my response. An army of words demanded to leap out of me, and I sort of wanted to flip the table over. But knowing I was outnumbered and out of place, I retreated and responded with, “OK.” To everyone’s relief, someone sitting a few seats away redirected the conversation. I sat there and looked for my reflection in a glass of water to make sure I returned from that vanishing act.

To this day, in my library, that historian’s book remains unopened and buried under books by Indigenous writers.

In his 1969 classic “Custer Died for Your Sins,” the Lakota scholar Vine Deloria Jr. took white explorers to task, writing, “Indians have been cursed above all other people in history. Indians have anthropologists.” Deloria goes on to note that, “The massive volume of useless knowledge produced by anthropologists attempting to capture real Indians has contributed substantially to the invisibility of Indian people today.”

Sometimes I become the vanishing Indian when white folks “play Indian.” I was once again in a crowded room, outnumbered as white folks gathered to hear a western writer promote her latest detective novel set on the Navajo Nation. I’ve always shrugged off this franchise, likening it to the Chuck Norris series “Walker, Texas Ranger” – sensationalistic, overly dramatic and cringingly comedic. Yet the longer I stared at her books, which frequently incorporate Diné cultural symbols and aesthetics (more so than what any actual Diné writer would use), the more uncomfortable I felt. And that was compounded by how comfortable she felt speaking for my people’s culture and history. What concerned me the most was the confidence in her whitewashed generalizations and inaccuracies. I felt myself turning into a dehumanized prop, like some sort of grotesque Indian statue pointing to a downtown art gallery. It’s in these moments, when faced with the overwhelming normalization of appropriating Indigenous cultures, that I truly wish to disappear.

The Palestinian scholar Edward Said often reflected on similar experiences regarding the erasure and invisibility of his people at the hands of Israelis. “Perhaps the greatest battle Palestinians have waged as a people has been over the right to a remembered presence and, with that presence, the right to possess and reclaim a collective historical reality,” Said wrote. “A similar battle has been fought by all colonized peoples whose past and present were dominated by outside powers who had first conquered the land and then rewrote history so as to appear in that history as the true owners of that land.”

It all comes down to power. The ego of whiteness and colonization holds the pen as it writes the narrative of Indigenous peoples, erasing our complex autonomy and humanity in the process.

As long as the settler state exists, I know there will be more times I experience the dehumanization of vanishing. But my friend Kali Fajardo-Anstine often reminds me of the power of our stories and the importance of persevering. An immensely talented writer, giving voice to the Indigenous Chicano in the Southwest, Kali can spin the room with the wave of her pen. And her new novel, “Woman of Light,” will make the world spin in a better direction. Recently, we had a conversation about the Santa Rita neighborhood – a predominantly Hispanic community  Durango’s southside forcibly made invisible in the late 1960s when the highway department expanded 550.

Though the community’s gone, it left behind a trove of letters, poetry and stories. “They all seem so happy/ And I hope we never part./ For now they plan to build a road/ Directly across my heart,” goes one poem. Kali wrote to me: “Seeing these poems, and knowing so many will try to make us even more invisible – this really reminds me why I’m writing.”

Guided by my ancestors, supported by my elders and allies, we’re taking the pen back and writing our own stories. Word by word, story by story we reclaim our dignity and humanity, all the while giving way to the vanishing colonizer.