Brave faces, everyone
Under the clouds of dark times, fighting for justice requires fervent action 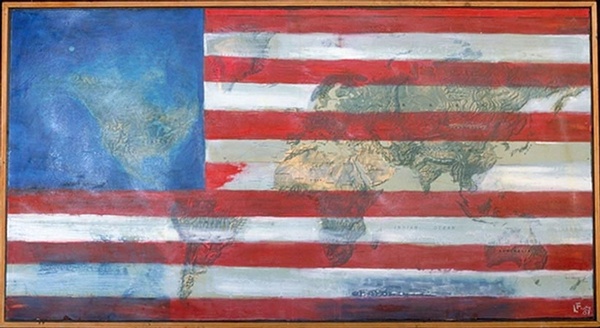 Lawrence Ferlinghetti's painting, "The Unfinished Flag of the United States."

Lately, all I can see is darkness.

In the void of a quiet night, I find it difficult to close my eyes, because I know our rights can vanish before the sun sees the sky. One morning I woke up and Roe v. Wade was overturned, ending a constitutional right to abortion. While mourning that loss, Indigenous sovereignty was then stripped away. Before I could take a breath to process that, the regulation of carbon emissions was also curtailed – all but accelerating the devastation of climate change.

Some take glory in the tightening of these chains. And more than usual, I’m suspicious of American flags, because we are in a new epoch of radical evil.

“Total domination,” German-Jewish scholar Hannah Arendt wrote, “strives to organize the infinite plurality of human beings” into “a never-changing identity … for to destroy individuality is to destroy spontaneity.” This totalitarian act of removing spontaneity and autonomy of people compelled Arendt, a Holocaust survivor, to invoke the term “radical evil” in describing this stage of fascism.

These recent Supreme Court rulings erode the rights of women, people of color and Indigenous nations. To make this even more horrifying, other rulings scale back the separation of church and state. When the Supreme Court begins its next session in October, it will be on a mission to dismantle protections for the LGBTQ+ community and our anemic electoral system.

Since Democrats and the liberal class continually fail to confront these Christian fascists, when it comes to the midterm elections, I don’t have any hope in that political party. Time and time again, they dangle the promise of progressive policies only to instantly abandon them in favor of cowering to right-wing reactionaries.

American theologian Reinhold Niebuhr was especially aware of liberalism’s bankruptcy. Liberalism, Niebuhr wrote, “lacks the spirit of enthusiasm, not to say fanaticism, which is so necessary to move the world out of its beaten tracks.”

Lately, all I can see is darkness, and things will get darker.

For Niebuhr, justice requires embracing “a sublime madness of the soul.” When under the clouds of dark times, “Nothing but such madness will do battle with malignant power and spiritual wickedness in high places.” That sublime madness is found in people taking direct action, such as when the residents of Westside Mobile Home Park formed a co-op to buy their property. Or when Durango folks mobilized a rally after the overturning of Roe v. Wade. The emergency hearts that flourished through downtown, at times disrupting “business as usual,” offered a glimpse of what we can radically achieve when we organize.

Sublime madness is also found in the prophets dreaming out loud in their poetry and art – the imagineers weaving together through storytelling our messy desires and despairs. “For reasons I don’t fully understand, fiction dances out of me,” Indian author Arundhati Roy once said. “Nonfiction is wrenched out by the aching, broken world I wake up to every morning.”

In the epigraph to her 1997 novel “The God of Small Things,” Roy quotes from legendary English philosopher John Berger: “Never again shall a single story be told as though it were the only one.” Because fascism seeks to crush the multitudinous experience of humanity, the multiplicity shared in storytelling can be an act of resistance.

Lately, all I can see is darkness, but sometimes I see light.

“Pidre came from a storytelling people … but he couldn’t help but think that Anglos were perhaps the most dangerous storytellers of all – for they believed only their own words, and they allowed their stories to trample the truths of nearly every other man on Earth.” When it comes to subversive, sublime storytelling, moments such as this are why I adore Kali Fajardo-Anstine’s latest novel “Woman of Light.” The reader is transported to various eras of Colorado as the novel follows the main protagonist Luz Lopez on her clairvoyant journey to collect her ancestors’ stories. While doing so, Luz must also navigate through a turbulent, Klan-infested Denver in the 1930s.

Offering snapshots of Indigenous territories in this region, before Colorado and New Mexico gained statehood, and a look at the darkness of 1930s Colorado, Fajardo-Anstine honors her Indigenous Chicano ancestors, alongside my own Diné ancestors. Through Fajardo-Anstine’s vibrant storytelling, our kaleidoscopic Indigenous lives are given a remembered presence, letting the world know how tethered we are to this land.

When people are in control of their own narrative, we can take the pen away from the white male colonizer, and we can write the rich stories contained within us.

The Supreme Colonizer Court, among other reactionary forces, is currently working against the radical democracy we desire – a world where many worlds fit. By denying us rainbows and rights, they seek to put us in cages on a scorched Earth.

When Black scholar and activist Angela Davis was imprisoned in the 1970s, James Baldwin sent a letter of solidarity to her. Baldwin concluded the letter with a statement we should all heed: “We must fight for your life as though it were our own – which it is – and render impassable with our bodies the corridor to the gas chamber. For, if they take you in the morning, they will be coming for us that night.”

Lately, all I can see is darkness, but I see light in you, dear reader. This failed state is ready to be devoured by fascism. But if we keep our emergency hearts open with sublime madness and organize and lift each other up, we can build something better, something beautiful.