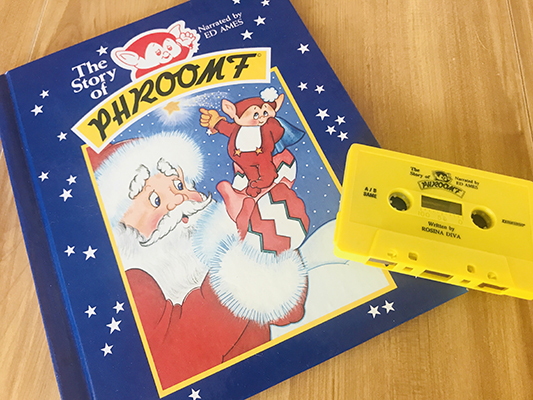 Perhaps everyone has a moment when they realize their upbringing was, in a word, screwed up. My moment was learning that other people’s Santa Clauses do not have a little alien friend who lives in Saint Nick’s knee pocket.

Now this isn’t as weird as it sounds. Christmas has its fair share of monsters in different cultures around the world. Think of the Krampus, or Frosty the Snowman. But I have never met anyone outside of my sisters – and not even all of them – who admits to knowing the book about Kris Kringle’s extraterrestrial sidekick.

I’d like to relate to you the story of this little guy. There are just two problems in my way: U.S. copyright law, and my complete absence of memory about any salient details. I long thought this alien integral to the spirit of Christmas. Turns out his only lasting impact is the earworm of a song from the cassette tape that accompanied the book. This song has been stuck in my head on a loop since before the “Very Special Christmas” compilation albums became a thing.

So here’s everything I remember about this otherworldly elf from his indelible theme song:

• I can’t spell his name, but it sounds like getting the wind knocked out of you by a large Nerf ball.

• He lives with Santa Claus.

• You’ve never heard about him and the reason is because

• But he loves you just the same

With the jaded eyes of an adult, I can see that this strange creature was some poor composer’s attempt to add ol’ Frumph to the Christmas canon. Hey, it worked for Rudolph, who someone invented for Montgomery Ward in 1939. But Rudolph had a better agent, and Poomf likely hasn’t drawn residuals in 30 years.

And also, the complete book and cassette on eBay.

Of course I bought them. It’s tangible proof that, at least in this case, I am no glitch in the matrix. I have not yet cracked open the book. But I do have a functioning cassette deck in my old truck, and I saved this moment for you, dear readers. I am ready to tell you this alien’s name is actually spelled Phroomf. And I am ready to revisit this childhood fever dream, narrated by Ed Ames, with all of you.

TITLE PAGE: There was once a thing called Phroomf Books. This media empire crashed before it flew. Guess it needed a Rudolph to guide the way.

COPYRIGHT PAGE: At least this story made it to a second printing. In 1986. With an original copyright in 1954? Guess I can’t blame this thing on the ’80s after all.

PAGE 1: Santa’s got a golden castle with a giant flag that says SANTA. Makin’ the North Pole great again. I bet all the elves are white.

PAGE 3: Multiracial elves. Whaddya know. Also, I thought for a moment Santa had no shirt on. Fortunately, it’s just a skin-toned undershirt.

PAGE 4: The clock strikes nine. AM or PM? No telling, since it’s dark for six months straight up there. Either way, nine o’clock is markedly less dramatic than midnight.

PAGE 6: The little alien, called a “pixie,” hurtles from the sky. He is terrified. And he hasn’t even reached Santa Tower yet.

PAGE 14: The pixie is now a “little man” and the elves are “dwarfs.” Santa, all I want for Christmas is some consistent nomenclature.

PAGE 17: One dwarf cooks stew in a witch’s cauldron in the fireplace. The little man probably thinks he is set to become dinner.

PAGE 21: The dwarfs dance in a circle around the pixie man, likely not easing his terror in any way. At least they can’t spell Fphroomphf’s name either.

PAGE 25: Frommph gets his kangaroo pouch on Santa’s knee. But Santa previously had a hole torn in that knee like a jolly old Eddie Vedder. It’s not clear how the little alien man will keep from falling backward into Santa’s pants.

PAGE 29: THE END. I paid $24 plus media mail shipping for this? I didn’t remember the story because THERE IS NO STORY.

NEXT UP: The song. Guaranteed to stick in my head until this classic gets its third printing.