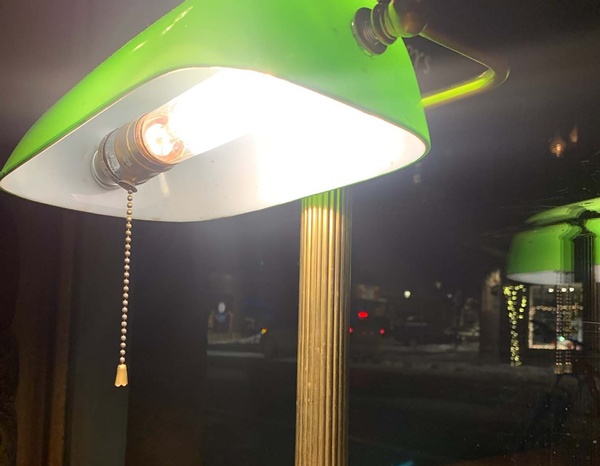 Maybe it’s the way snow sparkles as it dances through the streetlights, but there’s something enchanting about being in downtown Durango during those early moments of snow arriving. Especially on a Friday night of a dying year. Especially if you’re pulling tarot cards at The Office with an enchanting friend.

I pulled the Scorpio card, and as Cristen was telling me the meaning of it, I looked out the window and was held in that moment of cinematic serenity. The song “Faintly Falling Ashes” by The Lawrence Arms immediately leapt into my chest. “All those days that burned inside us swell up in the silence / Of snowflakes falling magically,” croons guitarist Chris McCaughan. The song is an ode to winter, while also acting as an elegy, reflecting on death and mortality. It’s my kind of holiday song. As Cristen and I sat in that booth, looking out the window, another verse filled the air: “No thoughts of dying / no more self-loathing for today.” And then a realization came over me: that is how I wish to enter every new year; how I’d like to feel every day.

Lately, every month has felt like a year, with the specter of fascism continually haunting our anemic democracy. Some nights I find myself exhausted from a heart that won’t stop bleeding. As much as I would like to carry on the days without death as a thought or threat on loved ones, the world reminds me how unavoidable that is. But I appreciate the joy found in celebrating a new year. It’s a transformation, with the hope that the sunrise will bring something better.

Much of The Lawrence Arms’ music grapples with self-loathing and ennui. It’s something I can relate to. So when McCaughan sings, “No more self-loathing for today,” it’s coming from someone who has devoted many lyric-filled notebooks to the topic. He’s giving himself, as well as the listener, permission to let that feeling die, to let it be buried in the snow globe moment. After that lyric, there’s an instrumental break. The guitars and drums are in contemplative conversation. To me it sounds like the whole band is holding onto that fleeting moment. I say fleeting because there’s a somber tone to the guitars, as if they know this comfort will only last as long as melting snow.

We live in an unwell country that thrives on violence and exploitation. Our imperialist power-system prioritizes war and policing over shelter and universal health care. Traffic lights and time clocks pull at our teeth on a daily grind. The demand of being overworked while underpaid, an act of survival for many, makes it difficult to access our creative, communal instincts. There’s also the toxic culture behind the screens we stare into, where algorithms reinforce the synthetic status quo. Within the cage of capitalism, we’re born into self-loathing.

It might take me a lifetime to unlearn that mindset. But when I listen to that song declare a strike on self-loathing, it’s a moment of refuge and relief.

It’s my ritual to play that song during the season of festive snow. But there’s another holiday track that gets repeated plays for the celebration of dying calendars, “One Hundred Resolutions.” It’s a song that, in its grimy glory, brings to life the magic of a transformative event. Once again McCaughan is reflecting on a destructive, directionless year of “accidental aspirations,” where he “laughed too late / and dug (himself) into a grave.” Backed by abrasive, highly charged drums and guitars, the song reckons with a year of bad luck. But the chorus seeks to reclaim dignity and empowerment: “This year I’ll try to stand up for myself / This year I’ll try not to drink so much.” It’s another attempt at working through destructive self-loathing, and there’s hope to be found in the confetti of a new year. Unlike the break in “Faintly Falling Ashes,” there’s an abundance of optimism in the interlude of “One Hundred Resolutions.” The muted guitars build up to an explosive outro chorus where McCaughan sings with conviction: “This year I’ll try to stand up straight / This year, let’s live like we’ve never lived before / This is our year for sure.”

The last two lines are clichés. And since the pandemic started, it feels impossible to embrace those statements. But in the context of this song, with the raw, romantic cadence of his vocals, it’s easy to believe. It’s magical when sappy clichés feel like truth. To believe we can begin again. To shed a dying world and rebuild.

And at its core, that’s what the start of a new year feels like: a collective renewal of optimism. That’s what I felt when Cristen and I left the bar that Friday night as people were making snow angels in the middle of the street. It was snow anarchy. But then, because everything is interconnected, I thought of the unhoused, and the city’s disregard for them. While refocusing on what needs love and healing within, it’s just as important to keep community in sight. To ask how can we do better to stand with the unsheltered, the undocumented, the unconsoled – those most vulnerable to a heartless system. A new year held in a new day is another chance to fight for a new world.