Last house on the left 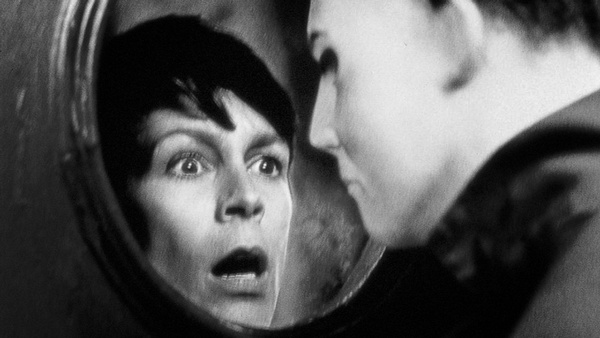 The 2014 horror film “It Follows” begins with a shot of a quiet suburban neighborhood. The ghostly camera moves slowly, offering a view of the community, when a young woman abruptly runs out of a home. She’s distressed, and no one can see what she’s running from. The camera remains steady. And even though the woman is outside, the viewer can feel her claustrophobia. When she looks into the camera, the viewer senses there’s no escape from the entity following her. In her panicked confusion, she runs back into her house. The house number is 1492.

The number immediately stood out to me. In the film, young people are haunted by death after having sex. The only way to survive is by having sex with more partners in the hopes of passing on that spirit to them. Perhaps the most chilling thing about “It Follows” is the way things are presented. It takes the manicured imagery of suburban America and reveals the terror beneath: the haunting of death that began at colonization. In the movie, that haunting has contaminated ordinary desires of attraction, and young people end up paying the cost.

Someone once said art should comfort the disturbed and disturb the comforted. And that’s what continually fascinates me about the horror genre. At its strongest, horror should cause one to step back and realize the phone call is coming from inside our house – the house numbered 1492.

In many ways, “It Follows” draws inspiration from the 1978 film, “Halloween.” The movie’s premise of a masked killer on a babysitter rampage helped establish the slasher genre. Similar to “It Follows,” the film’s subtext can act as commentary on settler society. In interviews and on social media, Indigenous journalist Nick Estes noted that, “Michael Myers stalks the ‘anywhere America’ white suburbs” where “all the houses are the same, but neighbors are strangers who never answer the door.” He went on to say, “Myers is the repressed violence of centuries of genocide, seemingly supernatural, unstoppable and inevitable.”

“Halloween” also had another cultural impact. With her portrayal of protagonist Laurie Strode, Jamie Lee Curtis solidified the concept of “the final girl.” As implied, the final girl is the one who survives and confronts her tormentor. From the analysis of feminist film scholar Carol J. Clover, in horror, a transition takes place where the narrative switches perspectives. The final girl first appears through the male gaze of the killer, but throughout the story, the film starts to empathize with her. In Clover’s book, “Men, Women and Chainsaws,” she further explains, “These films are designed to align spectators not with the male tormentor, but with the female victim – the ‘final girl’ – who finally defeats her oppressor.”

In her critique, Clover highlights something interesting among viewers: a “cross-gender identification,” where male viewers would root for the final girl in the end, because they have witnessed her terrifying journey. I often wonder how much of that translates into the real world, where navigating through a hetero-patriarchal society is already a horror for women and queer folks. That “cross-gender identification” simply comes down to compassion and solidarity. And in general, men just need to listen without feeling the need to mansplain. Because the majority of horror movies can be summed up as such: when men ignore or invalidate the intuitions and concerns of women, it summons death for everyone. The sacred is violated by silencing the prophetic voices of women.

As much as the horror genre fascinates me, there are also many moments when its crudeness are beyond redemption. Despite that, the messaging is worth exploring.  The Stephen King-inspired “Creepshow” series is something I have a soft spot for. As a child, whenever these films aired on TV, I dropped whatever I was doing to indulge. In “Creepshow 2,” one story that stuck with me was “Old Chief Wood’nhead.” It’s a story about a crude wooden Indian statue that comes to life seeking vengeance on criminals.

Out of curiosity, I recently revisited it. I was hoping there would be a subversive, progressive message that would validate all the time I spent watching it as a kid. But I was wrong. It’s a purely racist story, full of white actors in brown face posing as Indigenous people. And yet, as stomach-turning as it was, I couldn’t turn it off. That racist story reminded me of the way the Toh-Atin Art Gallery glorifies their Chief statue.

The horror story starts off with the struggles of a white couple running a general store in a bordertown. The husband, played by George Kennedy, adores his wooden Indian statue, obsessively cleaning it and talking to it. He has more love for the statue than he does for his wife. After a Native elder stops by to offer jewelry as collateral for his tribe’s debts, a young Native man – played by Holt McCallany in horrendous brown face – breaks in to rob the store. In all the chaos, the married couple is murdered and the young Native man and his gang leave with the jewelry. All this violence summons to life the wooden statue. When nighttime arrives, he tracks down the men and slaughters them.

As a child, the statue coming to life terrified me. I watched with dread as the criminals met their gory end. Watching now, it’s incredibly strange to see the final showdown between the white-man-in-brownface and the wooden Indian statue. There is no one to root for, and I’m only eager for this nightmare to end. And the story’s takeaway seems to be that racist mascots epitomize true Indigeneity. In the white settler gaze, the story says, these racist constructs are the last real Indians worth saving.