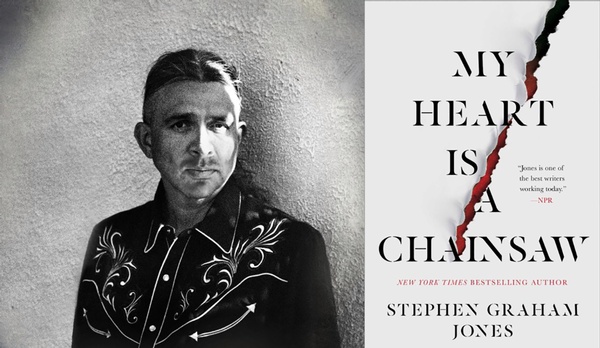 Last year, Stephen Graham Jones released his umpteenth novel, The Only Good Indians – a haunting, visceral horror story centered on Indigenous characters fleeing from an ominous entity seeking vengeance for their transgressions. And just like Freddie Krueger or Jason Voorhees, Jones has quickly returned from the void to deliver another bloodbath of a story.

In his latest novel, My Heart is a Chainsaw, we’re pulled into the gentrified border town of Proofrock, Idaho, guided by a 17-year-old half-Native girl named Jade Daniels – a social outcast on many levels and a diehard fan of horror films with an encyclopedic knowledge of the genre. Like many real-life border towns that fail to reconcile with their murderous histories and dark secrets, Proofrock has many skeletons hidden in the closet and in its lake, which rests near an abandoned summer camp, infamously home to many gruesome killings from decades ago (and now I’m realizing how profound it was when “Buffy the Vampire Slayer” said her town of Sunnydale rests on a Hellmouth).

The town of Proofrock is preparing to embrace a parasitic class of rich and powerful families moving into their community. This upper-tier group takes it upon themselves to develop the land near these tragic sites, with the local papers glowingly referring to them as “The Founders” for this ambitious project of housing development for the 1%. In the midst of this celebratory social stratification, dead bodies begin appearing around town. From foreign tourists to construction workers to even one of the rich yuppies, no one is untouchable from these brutal killings.

And from Jade’s perspective, where the slasher goggles are on at all times, these mysterious murders sound like the ominous rumblings of a horror movie. Which for her is cause for celebration; it’s a morbid dream come true, and Jade feels compelled to do her part. According to Jade’s logic, since the slasher figure “rises to right the wrongs,” when the slaughtering goes off the rails, “nature spits up its one-woman police force, its fiercest angel: the final girl.” Jade recognizes she’s not the chosen final girl. In the rulebook of horror, final girls are pure, innocent and good-natured. And given Jade’s heart-wrenching upbringing in a broken home where her parents are either absent or abhorrent toward her, she falls far from meeting those standards. But the new girl in school, Letha Mondragon, has strong potential as the final girl, and Jade seeks to educate and train her for the inevitable climactic battle between good and evil.

And yet, on this journey in her supporting role, Jade gradually learns that reality doesn’t exactly conform to the arcs and tropes of horror films. As Jade and Letha try to uncover who or what is responsible for the corpses piling up around town, the story takes dramatic twists and turns that at times cleverly leans into familiar tropes of classic horror, and at other times tropes that are endearingly subverted/inverted. The horror movie homages go even further – every chapter is named after a 1980s slasher and nearly every page mentions a horror film, from beloved classics to oddball deep cuts that will bring a smile to those weirdo VHS tape collectors out there.

On top of that, the end of nearly every chapter features a brief “Slasher 101” essay written by Jade for her high school history class. Regardless of one’s familiarity with the film genre, Jade’s rambling, excitable essays are a delight to read. And it speaks to the talent of Stephen Graham Jones to craft a character voice so distinct, rich and raw that the strength and innocence within her is palpable, even in these off-the-cuff supplementary essays. For a novel that takes metafiction to a heightened level, referencing and analyzing its own tropes and arcs nearly every step of the way, it still delivers an emotionally powerful story with Jade at the center.

Alongside the many references to horror movies, Jones also acknowledges some legendary women in the genre. The book begins with a dedication to Debra Hill – co-writer and producer of John Carpenter’s 1978 classic, “Halloween,” among many other notable films. As Hill bravely navigated through a predatory industry where powerful men were more vicious and demeaning to women than the horror villains she produced, she also became a friend and mentor to many women coming up in the industry, such as Jamie Lee Curtis to name one example.

The novel also begins with an epigraph taken from the film theorist Carol J. Clover, whose seminal text, Men, Women and Chainsaws, analyzed the horror genre from a feminist lens, giving a new subversive depth to the genre. Clover’s legacy to horror can be found in the concept of “the final girl” – the female victim-hero who, whether by luck or fate, is left to confront the face of horror in the end.

Alongside the novel’s richly layered pop culture acknowledgements and its commentary on colonialism, race, class and gender, Jones also organically weaves in a subplot commenting on trauma and abuse, and how visceral spectacles such as the horror genre can act as cathartic and therapeutic outlets for the aggrieved. And much like the arc of the best horror movies, such real-life terrors inevitably need to be confronted. During the chaotic climax of the story, Jade must face the many deaths she’s suppressed in order to live again.

In the 2015 re-release of Men, Women and Chainsaws, Clover admired how her concept of the final girl had become ingrained in pop culture. Yet she couldn’t help but comment on the way the modernized character concept was a little too clean and predictable. With Jones’ playful, subversive approach to storytelling, where stereotypes and settler state narratives are mocked and left for dead, and the forts demarcating “civil” and “savage” are burned to the ground, even the concept of the final girl is charmingly upended. In My Heart is a Chainsaw, such narratives of a “chosen one” become tangential. As long as one has the strength to rev up the heart like a chainsaw to confront horror head-on, one can make death retreat like a defeated army.