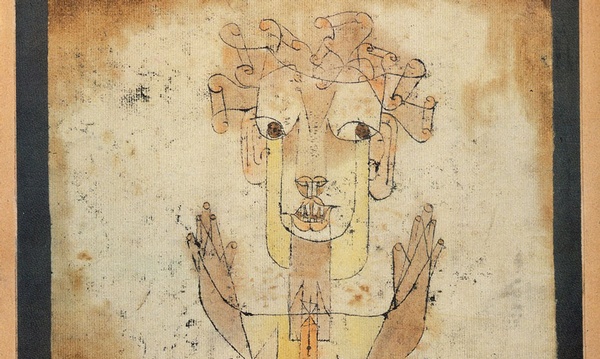 Michelangelo’s sculpture “La Pietà” depicts a sorrowful Mary holding the broken body of Christ. The sculpture captures a mother mourning the unjust death of her child after being executed by an imperialist power. Lately, the news around the world has felt like witnessing “La Pietà” in real time on repeat.

As winter winds down, the stage readies itself for spring’s renewal and redemption. Yet it is hard to hear the music amidst the violence of explosions and expulsions all around us. I find it tragic and curious that this season of rebirth is filled with so much man-made bloodshed. I have found myself staring into the abyss of spring.

As the civilian death toll in Ukraine rises to heartbreaking numbers, it has called to mind familiar tragedies.

During the American Civil War, in the spring of 1864, the U.S. military mounted a campaign of ethnic cleansing against my Diné (Navajo) ancestors. Spearheaded by Gen. Kit Carson, the military invaded Diné territory, destroyed and contaminated water wells, burned down crops and homes – basically eviscerated all means of living with the intent of forcing the Diné to surrender and leave their homeland. To compound this time of suffering, the forced removal that followed came to be known as The Long Walk, wherein the Diné and Mescalero Apache were forced to march more than 300 miles in the winter to a concentration camp called Bosque Redondo, located alongside Fort Sumner in eastern New Mexico.

Many died on the 300-mile journey, and during the four years of internment. Along with toiling through dehumanizing conditions in the camp, cultural genocide was also imposed. Prohibitions were put in place against practicing traditional ceremonies and speaking our own language. In these brutal conditions, around 1,500 Natives died. A treaty in 1868 finally allowed the survivors to return home. And though the treaty acknowledged Diné sovereignty, it also contained stipulations that paved the way for more cultural genocide in the form of boarding schools for Native children.

I grew up on the Navajo Nation in a single-parent home. My mom raised me while taking classes and working multiple jobs. While she was attending what’s now known as Diné College, she had a part-time job in the college bookstore. As a perk, sometimes she would bring home free books. One of those books was a hardcover edition of “Navajo Stories of the Long Walk Period,” published by the tribal college in 1973.

The book is a collection of stories handed down from survivors of the Long Walk and re-told by their descendants. In these raw reflections, the steps of this traumatic journey are retraced, as well as the misery of internment. One chapter recounts the many heart-wrenching deaths that occurred during the walk at the hands of the military. “On the journey the Navajos went through all kinds of hardships, like tiredness and having injuries. And, when those things happened, the people would hear gunshots in the rear,” one Diné man recalls. “(The people) couldn’t do anything about it. They just felt sorry for the ones being shot.”

In later reflections, this same individual recounts the tragic fate of a young pregnant Diné woman. “The daughter got tired and weak and couldn’t keep up with the others … So my ancestors asked the Army to hold up for a while and to let the woman give birth. But the soldiers wouldn’t do it.” The soldiers told the family, “Your daughter is not going to survive, anyway; sooner or later she is going to die.” The daughter tried to reassure the family that she would be fine and to keep moving. “Not long after they had moved on, they heard a gunshot from where they had been a short time ago.”

During my childhood when my mom was struggling to make ends meet for us, I was often left in the care of grandparents or aunts. I was haunted by her absence, but I liked to imagine she was secretly a superhero when she was away. It gave me comfort to imagine her out there in the world strong and safe, free from danger (to this day, she is above-and-beyond strong, and, to me, she is still a superhero). And since I indulged in the moments when we were together, bonding activities such as bedtime stories were a treat for me. From this era one distinct memory I have is my mom reading excerpts of the “Long Walk” book to me. Given the intensity of the stories, she read with cautious selectivity. And the moments we spent with this book had a monumental impact on me later in life, as an Indigenous bookworm, as a margin-walker seeking to decenter and destroy the Jackboots of colonialism.

In his ruminations on the Paul Klee painting “Angelus Novus,” German-Jewish philosopher Walter Benjamin remarked on the abstract face depicted: “His eyes are staring, his mouth is open, his wings are spread. This is how one pictures the angel of history. His face turned toward the past. Where we perceive a chain of events, he sees one single catastrophe which keeps piling wreckage upon wreckage and it hurls in front of his feet. The angel would like to stay, awaken the dead, and make whole what has been smashed. But a storm is blowing from Paradise … This storm is what we call progress.”

At this point, one can imagine the angel of history watching La Pietà in a revolving state: the past and present iterations colliding in tumultuous carnage. In the Diné language, we refer to the trauma of The Long Walk and the internment at Fort Sumner as Hwéeldi. In the spring of 1948, the Palestinians faced similar genocidal expulsions from their homeland – it is a displacement that still continues today, and they refer to it as the Nakba. On March 16, 1968, U.S. soldiers in South Vietnam were given orders to “kill anything that moves,” resulting in the M? Lai massacre, where more than 500 Vietnamese civilians were murdered. In March 2003, the U.S. began its slaughter of Iraq, turning the cradle of civilization into a grave, with civilian casualties in the hundreds of thousands, and inhumane consequences still unraveling there and in Afghanistan.

Though this is a season that has us drenched in blood, we must acknowledge this carnage rather than painting over it with whitewashed myths. And as the carnage continues, we have a moral imperative to confront and abolish the power-systems hurling us toward oblivion. We have a moral imperative to continue organizing against war, against evictions; against injustices international and local. Perhaps only then can we reach redemption; perhaps only then can we resurrect a humanity rooted in harmony with the world around us.