The dish pit in the sky 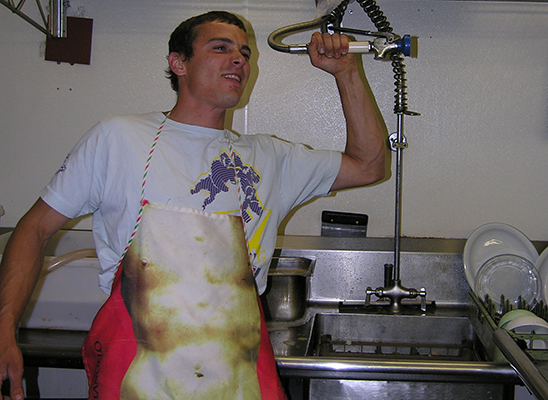 In another lifetime, I was a dishwasher. There’s this quote that I’ll have to paraphrase because I can’t recall it exactly but it went something like this, “there’s always someone who will do a job that most people don’t want to do.”

Recently, I found out that the place where I washed dishes the longest, Donita’s Cantina, in Crested Butte, is closing. That sent me down memory lane, recalling an era in my life when I was often elbows deep in suds, floating with little direction.

At the time I thought I’d be content forever just living to climb. I think many of us climbers think that way. But life has a way of marching forward, and what makes one happy in their twenties will most certainly not work in their forties.

Donita’s was crazy when I first started working there; remnants of the really crazy 1960s and 1970s in Crested Butte, or at least from the stories I heard. Memories from the past are usually unreliable. But I can say for sure that I saw grown men snorting coke at nine in the morning while they prep cooked. And, that, is crazy.

I’ve never tried cocaine in my life – just not my style – and doing expensive drugs just to have energy to work seemed insane. It was. The kitchen quickly cleaned up, and the high-level druggies were gone, leaving those of us who just dabbled in the smoke and drink; par for the course in any restaurant anywhere. If you’ve never worked in a restaurant, reading some Anthony Bourdain might help for context.

Or you could simply look to Donita’s signature dessert dish: the sopa-penis, which is a penis shaped sopapilla. Sometimes it was my job to make one and—off the record—I was once paid twenty dollars to deliver one to a bachelorette party wearing nothing but an apron.

The restaurant owners I worked for, with one exception, were either alcoholics or recovering alcoholics. I prefer the latter over the former, and the owners of Donita’s, Kay and Heli Mae, were both of that ilk. They were very kind to me. Sometimes I would make them nervous by letting the dishes pile up while I was taking a safety meeting, but I earned their respect when I’d bust those dishes out in no time flat.

After establishing myself as a hard worker – who also liked to test the limits of coming in late – I began a rigorous routine every summer. I would prep cook in the morning, go bouldering or write in the afternoon, and then wash dishes all night. I’d often sleep in the bed of my truck, parked in the back right next to a dumpster that bears would often frequent, and wake up and do it all over again.

The money was good for the time. If I worked hard enough, I could climb all winter on the dough that I made. Kay and Heli Mae would always take care of me. And, then there was Tom.

He was in charge of the kitchen, but it took me a while to figure that out. He was all business when things were busy, but when they slowed down, he opened up. He was a wild man, a product of the ’60s, and among his stories were the tales of camping out in the winter in Crested Butte. I thought I was roughing it, but this guy was the true representation of a hardcore mountain man.

Tom found out I was a writer, and often he would tell me, “Don’t end up as a dishwasher, continue with your writing.” There are things that people you respect tell you over and over again, and then it doesn’t make sense until 10 or 20 years later. Plus, I was born to be an entrepreneur, but I only realized that in the last couple of years.

I enjoyed my time working in restaurants, especially at Donita’s. I loved the camaraderie, and I loved the fact that if I did my job well as a dishwasher no one could mess with me. Though I didn’t see it for years, Tom was right to encourage me to see beyond the dish pit; not because there is anything wrong with working in that industry, but because he knew I had a skill that would make me more money and allow me to self-actualize.

I was in Crested Butte last week, but with a hectic schedule and a book presentation, I didn’t make it into Donita’s. Where Tom is headed now, I don’t know. I know he gave me some direction when I lacked it, and the older I get, the more I appreciate his sentiments and vision. Living in the moment is great for mindfulness, but looking into the future is key to being happy later in life.

It appears as though I’ll never step foot into Donita’s again, but the memories will stay with me forever. I’m grateful for every lesson learned, and most of all for Tom who encouraged me to not only work hard, but to look ahead, and dream bigger and brighter.

Mehall is the author of five books including The Desert, a dirtbag climber book. You can read more of his work at climbingzine.com.