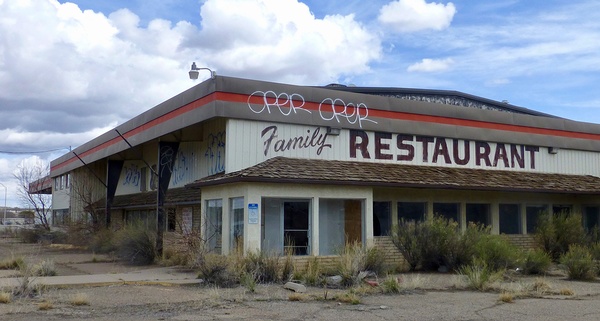 Prompted by pure nostalgia, I pulled in for a closer look at the abandoned M&M Truck Stop south of Cortez. For over a decade, my wife and I ate breakfast there every Friday before I rushed off to complete my teaching assignments at our local high school. The restaurant’s doors have been closed since 2001. Behind the building an updated Colorado Port of Entry still monitors commercial truck traffic, 200 truckers a day on average pulling in, off the old scenic Highway 666 which in 2003 was renamed Highway 491.

When the truck stop first went out of business, I hoped it was only a matter of time before some enterprising investors would reopen it. The location is situated perfectly, just off the only major north-south highway through the Four Corners region. Commercial traffic, and especially tourists, check their fuel gauges before or immediately after an encounter with open country. Nineteen years later, I am abandon- ing all hope.

If the State of Colorado had a registry for historical wrecks, this derelict of a truck stop should appear near the top of its list. Unlike the Titanic, the wreck is not hidden beneath miles of impenetrable ocean. Every person who drives by has little choice but to gasp at the enormity and longevity of this monument to neglect.

The pumps are gone, many windows broken, wide open to incoming weather, birds and vagabonds. Two plate glass entrance doors remain boarded over after having been kicked in. The glass, never cleaned up, lies scattered like immortal ice cubes across the entry. Young trees reach up through the asphalt, a few of them leaning toward the outside walls for support. On a sill where I remember a gas pump cashier once sat, I spotted (but didn’t touch) a row of plastic bottles lined up like bladders in the sun, filled to the neck and capped, a yellow liquid reflecting the light. Gatorade they were not. Graffiti adorns the outside building surfaces. I didn’t have the nerve to go in and see how the building fared on the inside. The owner(s) of this truck stop of horrors ought to be required by our county court to sleep there overnight at least every Halloween.

Derelict buildings don’t only occupy war zones. You can find them in nearly every town, both here and abroad. Each property starts life as an ambitious structure, then years of trying to run a business or make a home matures them,

but eventually their pointless neglect ends with abandonment. Rather than leveling the old sense of purpose before moving on to better things, the past is left standing, deteriorating bit by bit, even infecting other buildings in the community with its strain of architectural leprosy. Just west of the truck stop, you’ll see collateral damage has crept across the highway where three former business buildings also stand empty, all signs of life support disconnected.

In one sense, some historical structures fit into a niche that are worthy of protection. I suppose the truant or distracted owners rationalize their derelicts qualify as historical and by leaving them fall to pieces some kind of contribution toward educating the locals has been bequeathed. Or better yet, they’re just lazy. Hard to explain the kind of thinking that stubbornly turns the past into a festering boil.

Another miserable wreck leers at travelers between Cortez and Mancos along Highway 160, a former gas station/convenience store/tourist attraction/stocked-fishing-pond-sorta-camping facility which imploded over a decade ago. Local gossip suggests a gasoline storage tank leak followed by a required State of Colorado cleanup prompted a dispute. The place closed down, and the property owner now uses it to vent his anger at passersby, going so far as to taunt spectators by crudely painting “toxic site” in large letters, allegedly “sponsored by the State of Colorado.” All we see is the eyesore, caught between the State of Colorado and the property owner, an unresolved derelict of a dispute, the public saddled with another festering boil of an ex-business that promises to rot before any rule of law is applied. But there is always hope. After several years of wrestling with the high price tag to remove environmental hazards while demolishing our abandoned 1960s era Cortez high school, its deconstruction and disappearance has finally been completed. A GOCO grant provided the City of Cortez with some funding to help purchase a 14-acre site where officials plan to install a south-side park for city residents.

As a former teacher from that recently demolished building, I applaud the city’s efforts and look forward to sitting under a shady tree, or stretching out on the cool grass, perhaps over the exact spot where a reincarnation of my old classroom might materialize from my dreams after falling asleep. If any former students walk by, please, please don’t wake me up.