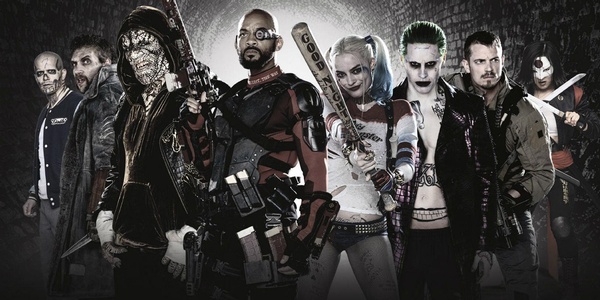 If you’re thinking of taking the kids to Cineplex this holiday weekend, you’ll be glad to know there are a few family friendly options.  Two of the biggest recent openings– “Star Trek: Beyond” and “Suicide Squad” – have a lot in common, but beyond the giddy joy of watching computer-generated things blow up, beyond the vaguely motivated bad guys and the even vaguer personal sacrifice it takes to beat them, both of these movies, have, at their core, a commitment to keeping the crew together. Somebody call Dr. James Dobson: these recent movies are focusing on the family.

Not your typical family, mind you. In “Star Trek Beyond,” it’s the bonds formed from sailing through the vast reaches of space for years on end that motivate the characters. When the film begins – more than halfway through the original five-year mission – Kirk is thinking about giving up his captain’s chair for one attached to the ground, but he can’t bring himself to tell his bestie, Spock – who is also privately thinking about leaving Star Fleet.

The crew embarks on a hastily assembled (and poorly thought out) rescue mission, and disaster strikes. Director Justin Lin clearly has a lot of fun tearing the good ol’ USS Enterprise into pieces, but is he aware that this isn’t the beloved ship’s first death? It actually happens pretty often in the Star Trek movies, and so I think some of the shock is lost. The crew ends up stranded and separated on an unknown planet, (well, the members of the crew whose names we know – the rest end up killed or captured). It’s up to Kirk, Spock, McCoy, Uhura, Scottie and Chekov to find each other, find the prisoners, and get back home before the bad guy can get the MacGuffin and destroy the world, because he hates peace and freedom. And because that’s what bad guys do.

With Lin behind the camera, there are definitely times “Star Trek Beyond” feels like “Fast and Furious in Space.” The way Lin turned those basically empty movies into stories about a makeshift family serve the Star Trek crew pretty well. A lot of fans who complained that “Into Darkness” barely felt like a Star Trek movie will enjoy this one more. There’s plenty of banter and character moments, and that old hokey feeling is back again.

But I liked “Into Darkness,” and I like it a lot more than “Beyond.” I guess I’m not that big of a Trekkie, because I’ll take an exciting plot over an extended episode in a blink. And that’s what “Beyond” feels like – an extended episode of the original series, with better CGI. Nothing ever really feels at stake here; regardless what happens, you never doubt that the crew will reunite, the ship will be rebuilt, and they’ll be back on their mission as if nothing ever happened by the time the credits roll. From a filmmaking perspective, “Star Trek Beyond” has everything a fan could want, except an ounce of ambition.

“Suicide Squad,” on the other hand, is oozing with ambition and fails to really land any of the things it’s trying to pull off. But let’s give it points for trying. Really, it wants to do so many things, it’s kind of endearing to watch it fail. Writer/Director David Ayers wants to include each character’s origin story – and there are a lot of them – not at the beginning of the film, but embedded as we go along. It’s a cool idea that doesn’t work, because it creates a whiplash inducing pace to the movie. He wants to tell a story that takes place in the space of a few hours all (more or less) in one place. Another cool idea (see “Die Hard,” or “The Raid: Redemption”) but again, major pacing issues. And he wants to help us see this motley crew of villains as heroes. That’s something he mostly pulls off.

For all the talk about Margot Robbie’s portrayal of Harley Quinn and Jared Leto’s Joker, this movie firmly belongs to Will Smith, playing Deadshot. Smith used to be an actor we rooted for, but somewhere over the last decade, his charisma just up and vanished, and so did all that good will. Credit either Smith or Ayers for finding his groove; he’s a lot of fun to watch, and we’re reminded why we like him, even when playing a character that takes out mob informants before getting ice cream with his daughter.

Ayers takes a pretty standard approach to these antiheroes; they’re mostly good people who’ve been dealt crummy lots in life, or at best have been given more lucrative opportunities to be bad than to be good.  Deadshot wants to be a good dad; Harley wants to be a model housewife (straight out of “Leave it to Beaver,” according to a dream sequence) and the others, well, we don’t have time to learn much about them, but they’re probably good people too, deep down.

Aside from Deadshot’s journey toward redemption (and his daughter) and Harley’s craziness/hotness, there’s not a lot to “Suicide Squad.” Hardly any of the other characters are given much to do, most notably Adam Beach. The villainess mostly cackles wildly and waits for the bad/good guys to come stop her from taking over/destroying the world, because that’s what bad guys do.

By the end, we’re supposed to believe that this makeshift crew of seriously messed up (but good-hearted) people have become a family unit, not unlike the Star Trek crew, though it only took them a few hours instead of a few years. It’s a stretch, but what isn’t in the DC cinematic universe? If I’m going to believe that Harley Quinn’s baseball bat packs more of a punch that a police officer’s service weapon, I guess I can buy the whole family thing. Besides, that makes it good, wholesome, family entertainment, in spite of the violence and the language and the fact that everyone gets to wear pants except the girl. Right?

Ring in the New Year with the Secret Circus Society’s Illuminaughty at 10:30 p.m. on New Year’s Eve.

Birds of a feather

Zink’s Pond, located along the Animas River south of Durango, has long been a choice location for birders.