Going off the rails
'T2,' 'Guardians' fail to live up to originals 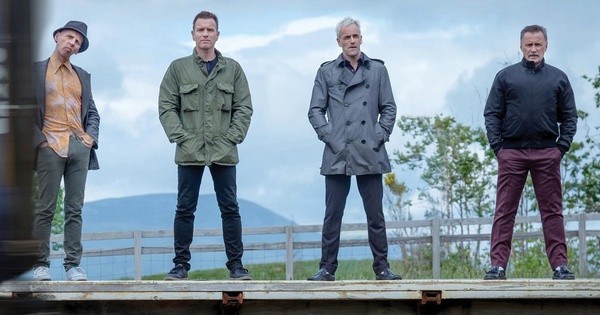 Sickboy and the gang return for a disappointing T2.

I’m feeling really torn. On one hand, I’d like to recommend you watch “Trainspotting” before going to see “T2

– Trainspotting” because it was loaded with callbacks to the first movie. I didn’t watch it first, and I just couldn’t remember enough for the emotional moments to connect the way they were clearly supposed to.

On the other hand, the first “Trainspotting” is a better movie. Much, much better. And so maybe it’s not a good idea to watch the old one first – it’s just going to highlight all the deficiencies of this sequel.

Everything about this sequel feels half-baked, beginning with the awkward title, which conjures up images of a heroin-addicted liquid metal killing machine from the future. If only the movie were about that. Instead it consists of three stories that tie together in the climax. There’s the reunion of Sickboy/Simon (Jonny Lee Miller)

and Renton (Ewan McGregor). Renton comes back from Amsterdam, freshly divorced, without much to live for, and Simon convinces him to embark on a business venture, turning an old pub into a brothel. Simon says he’s stringing Renton along until he can get revenge, but frankly I could never figure out if he meant that, was just posturing, or changes his mind at some point. The writing is pretty muddled.

It was interesting to see Miller return as Simon/Sickboy. He was easily the least memorable character in the first movie. He has become a much better actor since then and is close to compelling here, even with so little to work with. McGregor is the bigger star, thanks to “Star Wars,” but Miller may be the better actor.

The second storyline is about Spud (Bremner) trying to get free of heroin and discovering he’s a good writer. This is, paradoxically, engaging and predictable; a lot of its appeal hangs on a winning performance from Bremner. He’s so ugly and charmless, he’s kind of adorable. Spud is the emotional center of the movie, the only one you can really root for, and really, the only one who is more interesting at 40 than he was at 25. And then there’s Begby, the thug, who escapes from prison, tries to enlist his son in the family business of burglary and theft, and hunts down Renton to get his revenge.

“T2: Trainspotting” is the definition of the tepid, ill-advised sequel, the kind of thing that will be forgotten by fans as quickly as possible. Danny Boyle is a good, if somewhat limited, director, and he’s made plenty of interesting and entertaining films. This is certainly his worst.

“Guardians of the Galaxy Vol. 2” isn’t quite as good as the original, but it’s no tepid, ill-advised sequel, either. The distinctive quality that sets “Guardians” apart from the rest of the Marvel universe is its snarky sense of humor. Baby Groot is reliably funny, though it’s even funnier to think about Vin Diesel voicing this character. Dave Bautista, who plays Drax, shines in particular. Since Bautista started in pro wrestling, it’s easy to call him the next Dwayne Johnson, but the Rock doesn’t have Bautista’s comic timing. This guy is funny.

The plot, though, is convoluted. Peter (Chris Pratt) is rescued by his father, Ego (Kurt Russell,) who turns out to be a god-like being with infinite power and his own planet. Like in one too many “Star Trek” episodes, as Ego shows his son around, proclaiming “all of this is yours,” you wait for the other shoe to fall. It’s an odd role for Russell, whose rugged looks usually get him cast as outlaws and drifters – you’d think they’d cast someone with a more regal look.

All the other storylines are also about reconnecting with family: Gamorah (Zoe Saldana) and her sister reluctantly settle their differences, and Rocket (Bradley Cooper) comes to recognize that Yondo (Michael Rooker) isn’t that different from himself. I wish that storyline would have gotten more screen time; I would much rather have listened to those two trade insults than Russell go on and on about how perfect he is.

The whole thing feels overstuffed, primarily because Ego needs a lot of explaining, and the film doesn’t handle it very gracefully. Volume 2 drags and fails to pack the emotional velvet punch of the first film. I am decidedly ambivalent about the film’s resolution, which ventures into territory no other Marvel movie has touched by killing off a main character. I really want to care, director James Gunn really wants me to care, but I just ... don’t. I’m mostly waiting for the next snarky joke or visual pun.

I wouldn’t go so far as to say it’s bad (it’s a hell of a lot better than “T2.”) It was entertaining and fun. “Guardians of the Galaxy” is one of my top five Marvel movies, so I came into this with high expectations. the sequel is not even in my top 10. It is funny, though, and I still think that’s the main thing we want from Guardians.