Much ado about nothing
Latest 'Planet of the Apes' so self-absorbed, it forgets to have a point 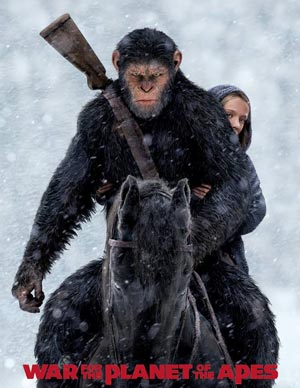 The third movie in a trilogy is almost always the weakest, and that trend continues with “War for the Planet of the Apes.” The first film (“Rise of the Planet of the Apes”) surprised us all by making a decent movie out of a silly premise. The second (“Dawn of the Planet of the Apes”) blew us away by exploring all kinds of ideas about two communities with plenty of reasons to distrust each other as they tried (and failed) to find peace. Here is the third, and it very nearly descends back to the silliness and pulpiness of the original ’70s version. Despite a half-hearted attempt at thematic and social weightiness, it seems more interested in just being a movie about people shooting guns at monkeys who ride horses and throw spears at people.

Sometime after “Dawn,” the war between apes and humans still rages. Some of the apes have joined the human side. They believe the humans are just too strong for Caesar (Andy Serkis) and his apes to ever defeat. With the help of a turncoat ape, the humans discover Caesar’s secret base and attempt to assassinate him but mistakenly

kill his wife and son instead. Caesar, consumed with rage, seeks revenge against the wild-eyed Colonel (Woody Harrelson) who murdered his family, while sending the remaining apes to seek refuge in the desert. But the Colonel and his men manage to capture all of the apes, including Caesar, and “War” becomes a prison break film. That is until the final climactic action sequence, which looks more like what the title suggests, full of helicopters, fireballs, explosions and another key betrayal.

More than ever, we now root for the apes and see the humans as selfish, brutal and racist, which is what director Matt Reeves has been working up to. CGI has made such giant leaps that the apes now appear emotionally complex, nuanced, moral, with complicated relationships. But Reeves cheats more than a little by taking humans in the opposite direction; there aren’t many homo sapiens of note in the movie, and Woody Harrelson plays the villain as more caricature than character. He’s a raving, racist, bloodthirsty lunatic. Is this all that remains of humanity?

We’ve seen the “hero becomes consumed with hatred only to learn that revenge is never really satisfying” trope played out a thousand times, and this movie doesn’t have much to add to it. A lot of things that could have been interesting about “War,” for instance, the psychology of the traitor Donkey or the way captivity affects captives, a la “Bridge on the River Kwai,” are left frustratingly undeveloped. The movie even manages to borrow a plot point or two from “Apocalypse Now” without ever seeming to understand why the original Colonel was mad or why it matters. Its best parts pay homage to “The Great Escape;” the extended prison break sequence is by far the most thrilling part of the movie, far outpacing the explosions and other action.

As an empty action flick, the cousin to a Michael Bay picture playing on the next screen over, it is admirably well-executed. It is mostly well-paced, if a little slow at times, and it builds to its big action scenes well. There are some nice visual touches, like the green lasers piercing the dark waterfall cave during the assassination sequence. Harrelson suitably chews the scenery, and the brutality of the captors toward the apes is visceral and moving.

If “War for the Planet of the Apes” had been content to be a popcorn-selling summer action flick, I probably would have given it a better grade. But the whole thing feels so terribly grim and self-serious, without ever giving us anything to be so serious about. Reeves and Michael Seresin design every shot of the film on a grand scale and fill each dramatic moment with swirling music. They are trying so hard to make us feel things, but it’s never clear just what we should be feeling. The technique is there. But without a functional allegory, the narrative is lacking, and it amounts to an awful lot of sound and fury ultimately signifying nothing.

Ring in the New Year with the Secret Circus Society’s Illuminaughty at 10:30 p.m. on New Year’s Eve.

Birds of a feather

Zink’s Pond, located along the Animas River south of Durango, has long been a choice location for birders.