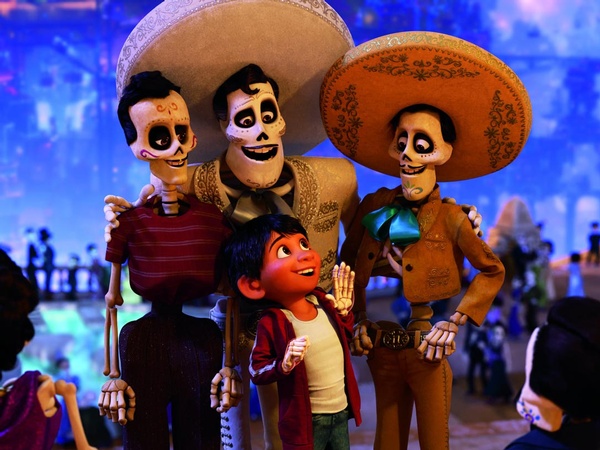 In Disney/Pixar's movie "Coco," young Miquel finds himself in a land where people only exist as long as they are remembered.

It’s good to see Pixar back on its game. “Cars 3” was a cynical, empty advertisement for toys, without a doubt the very bottom of the Pixar barrel. But “Coco” recovers the reasons why I love (and faith-fully attend and review) Pixar films. It is visually stunning with a big heart and a willingness to both go for broke emotionally, while also making sure it earns every sentimental moment.

But I’ll tell you, I was worried. I’m still not sure what I think about the way Disney/Pixar is looking to other cultures for storytelling material. To be frank, I’m torn, and it makes me a bit nervous every time. It is fun to see non-white characters and non-European cultures on the screen, in all their beauty and variety, and I am glad that both white and non-white children will have heroes with brown skin and dark hair.

On the other hand, these movies can feel like Western tropes dressed up in the clothes and customs of other cultures.

For example, “Coco” is the story of Miguel, a young Mexican growing up in a proud family of shoemakers. Music is forbidden in his family, because of a great great grandfather who was a musician and deserted his family to pursue his career. But Miguel has a secret love and talent for music, and finds his family identity too constricting. This basically makes “Coco” a “follow-your-dream” type of story (as was “Moana”), and that particular genre is rooted in the Euro-American immigrant experience – the tension between honoring your roots and striking out to do something new. (Yes, I’m aware that Latinos immigrate to America, but their reasons – and their story – are often different from European immigrants.)

In pursuit of his dream to become a famous musician like his great great grandfather, young Miguel (voiced by Anthony Gonzalez) lands himself in the land of the dead, inspired by Dia de los Muertos. It’s visually striking, amazing animation, an intricately layered underworld inspired in part by Mayan architecture, and in part by the ofrenda altars that play a central role in the story. This land functions as a subset of the land of the living; people here only exist as long as they are remembered; when they are completely forgotten by the living, they fade into nothingness. On one day of the year – Dia de los Muertos, of course – they are permitted to cross a flower bridge into the world of the living and visit their families, but only if their photo occupies someone’s ofrenda.

Trapped among the dead, Miguel must seek out his great great grandfather and get his blessing in order to return to the land of the living. To do so, he enlists the help of a scrappy skeleton named Hector, who is just trying to get someone to remember him. There’s a twist that’s pretty easy to guess, and as a result, Coco sags a little in the middle with the weight of the familiar. A lesser movie would have played this out to its predictable conclusion, but “Coco” has a few more tricks up its sleeve. This is the extremely rare film where the third act really is the best. Pixar doubles down on character development and conflict even as it ramps up toward the climactic resolution of its central problems.

And along the way, “Coco” manages to invert that “follow your dream” formula. The villain, after all, is a guy willing to do whatever it takes to maintain his reputation. He is beloved by his fans but acts, behind the scenes, like he has no relatives. You wonder who remembers him and who only remembers the fame-distorted image of him. And while Miguel’s dreams and desires are important, he learns that they are not as important as his responsibilities to his family. And when he honors those, doors open for him that otherwise would remain closed. It’s a both/and solution to an either/or problem. “Coco” thrills with its visual invention. But its core elements – dead relatives whose choices and character still influence who we are and who we will become; the power of loving memory; the importance of honoring those who have gone before us – is both timeless and increasingly relevant to a white, Euro-American audience. Many white people like myself have so little sense of history; we are far more concerned with the future than the past, and cut off from a key piece of our identity as a result.

I think “Coco” is multiculturalism done well. I expect that Latin Americans will enjoy this movie because they see their culture and values portrayed on the big screen in a respectful and engaging way. I hope that non-Latinos will see a rich culture that has much to teach us about what it means to be human and part of a family that extends long before and long after our own lifetimes. “Coco” brought a tear to my eye because it created space for me to reflect on my own family, the people I remember with love and affection, and the ones that tragically have been forgotten.