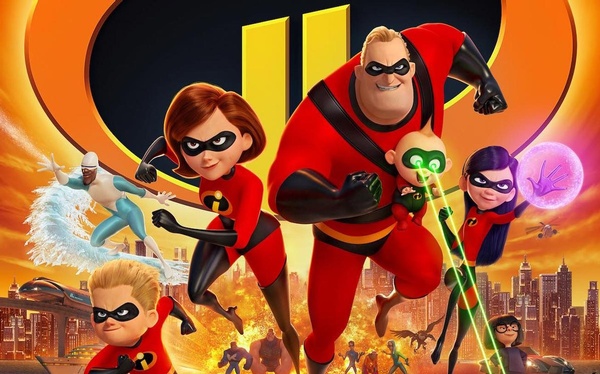 The Incredibles” – the first one – is my favorite Pixar movie, and that’s saying something. It was released at a time when deconstructing superheroes was a familiar thing in comics but unheard of on the big screen. It’s hard to overstate how much the superhero craze of the last 15 years owes to “The Incredibles,” examining the problems and absurdities of being super in an ordinary world.

“The Incredibles 2” is not bound to have that kind of seismic impact; how could it? Nevertheless, it’s enjoyable in its own right. It starts seconds after the first one ends, and, quite frankly, I was a little disappointed team Incredible never actually brings the Underminer to justice. (Even my nine-year-old noticed this.) Loose ends aside, the setup is a little too similar to the first one. When Elastigirl gets a call from a mysterious benefactor who wants to help her rehabilitate the superhero image, there’s no doubt something fishy is going on. They want Elastigirl because she doesn’t cause as much collateral damage as Mr. Incredible, which means Bob Parr finds himself home with the kids while his wife heads off to work.

Director Brad Bird wants to play with this dynamic but unfortunately doesn’t find anything new to say. This might be because he has been reluctant to ground his characters in a particular time and place. A lot of it looks like the early ’60s, but anachronisms abound. Is Bob Parr/Mr. Incredible an early ’60s dad, husband and breadwinner confronted with the existential challenge of his wife’s ability to provide for the family? We never know. The script, thankfully, mostly avoids lazy cliches about clueless fathers. Bob struggles at first, as anyone would in a new job, but works hard to help with home-work and meals – but the material never feels creative or original.

That’s largely due to the presence of Jack-Jack. Pixar stumbled on comedic gold when they made this baby more powerful than the rest of the family. That premise played a small role in the first movie, then spawned

a funny short film and now is milked for all it’s worth in this film. (This reminds me more than a little of “Minions,” the one-note spinoff from “Despicable Me,” as well as “Cars 3.”) However, I am happy to admit it never gets old; they keep giving the baby new powers, and it keeps inspiring funny sequences. The scene in which Jack-Jack does battle with a raccoon is one of the best in the movie. But at the same time, I found myself wondering why we were spending so much time watching everyone try to manage this baby. The sequences do almost nothing to further the plot and ate up time that could be spent delving into the gender themes – yet they’re the most entertaining in the movie. That’s the definition of “structural problems.”

I admire and enjoy Bird’s visual style: a vision of the present as seen by the past, a lot like “The Jetsons.” I also really enjoyed the action scenes. There’s one in particular – the one that caused Disney to issue a “seizure warning” – that was fantastic, exciting and different from anything I’ve seen before. This film is fun to watch.

But, as always, film is about story, and the storytelling is both thin and padded. There are themes to explore, most obviously about our slavery to screens, but also about the way we have replaced real life heroes with larger-than-life superheroes. But instead of working those into the story organically, they are just stated, outright. The villain has things to say, and says them. End of story (or lack thereof, really.)

The sequel doesn’t stand up to the original, but that’s not unusual, even for Pixar. I’ll see it again, eventually, but I don’t expect multiple repeat viewings. It’s certainly not as bad as “Cars 3,” a movie that should never have been made. I offer it faint praise, and that’s all.

As an aside, before this movie, Pixar ran a short, titled, “Bao,” a strange and wonderful story about a Chinese mother whose steam dumpling comes to life. I think it could be interpreted as the struggle of a mother to let her son grow up and make his own decisions. I found it very moving.