That sinking feeling
'Dunkirk' capitalizes on universal themes of defeat, survival to becomes one of year's best 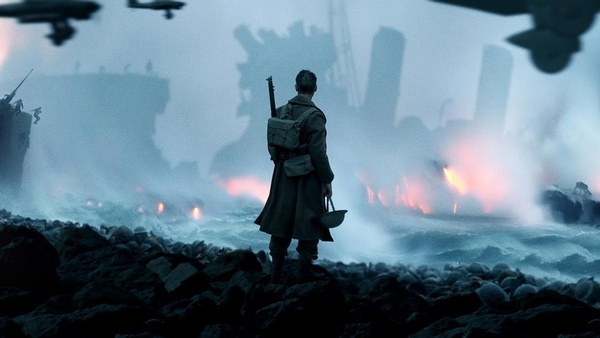 Dunkirk” is a superbly disorienting film. It is a million miles away from your standard historical flick, the kind that attempts to explain an event so that the audience understands its importance, like Normandy or Iwo Jima or Apollo 13. Director Christopher Nolan isn’t interested in explaining the Dunkirk evacuation of World War II; he’s more interested in examining what it must have felt like to actually be there. And the fact is, most of the people who were there didn’t really know what was going on, so why should we?

As the film opens, we are almost immediately on the beach with 300,000 soldiers standing in lines, waiting to be evacuated while German airplanes strafe the sand with bombs and machine guns. What strikes you is the quiet. The soldiers aren’t talking, nobody is explaining what they’re doing there, what they’re waiting for, how they’re feeling about the whole situation. Their silence speaks volumes. As a whole, “Dunkirk” is remarkably terse; characters only speak when they need to, and Nolan studiously avoids anyone saying something everyone else already knows; a common war movie trope, used to make sure the audience knows what everyone else knows. This is a film that demands a lot of its audience, but also one in which the particular plot details aren’t really that important. This is what you need to know: they are trapped, they want to get home, and they can’t. It’s pretty simple.

Nolan edits three narrative timelines – over the course of an hour, a day and a week – so that the emotional beats line up, echo and bounce off of each other. “The Mole” is about the beach at Dunkirk; Kenneth Branagh plays a Navy admiral who has nothing to do but watch as the rare ship he is able to load with men gets torpedoed by U-boats or

bombed by German airplanes. The British Navy isn’t sending much help; it’s just too dangerous. There are 400,000 men on the beach; Churchill has declared that if Britain can manage to evacuate 30,000, he’ll consider that an acceptable outcome. In addition, we witness the attempts of a few soldiers, fully aware that the warships are not coming to rescue them, to find a way home.

The second storyline stars Tom Hardy as Farrier, a British fighter pilot, attempting to shoot down the German planes that are bombing the boats. The aerial flight sequences here are breathtaking and graceful, better than any other fighter plane scenes I have seen on the screen. A huge part of their beauty is that they take place almost entirely in silence, save for the drone of the Spitfire engines and the rattle of machine gun fire.

Third, we have Mr. Dawson (Mark Rylance), the civilian owner of a small fishing yacht, who sets out across the English Channel to rescue as many soldiers as he can fit into his little boat. Historically, there were over 700 of

these little civilian vessels, and they were responsible for the miraculous evacuation of more than 300,000 men. This is the heart of the story, and why Dunkirk – which is basically the story of a skin-of-your-teeth escape after an embarrassing defeat –has become part of Brittain’s national memory and mythology. The point here is that England is both a magnificent military force and a nation

of simple country people, who enjoy gardens, long walks and smoking a pipe by the fireside. And the latter provides the rock-solid foundation of the former. To call upon another beloved British fable, you could say that Mr. Dawson is a hobbit; it’s up to him (and men like him) to save the world, and he doesn’t hesitate.

We never get to know the characters in “Dunkirk;” Nolan relies a great deal on us being able to recognize familiar faces (Hardy, Cillian Murphy, Rylance) and we must determine what kind of people they are based entirely on their actions. And there are no villains in “Dunkirk.” Of course the villains are the Germans, but there are no German characters in the movie; no mustache-twirling sadistic Nazi screaming out orders. The German planes appear, drop

their bombs and disappear; we never even see the U-boats that destroy the destroyers. That makes the antagonists of “Dunkirk” feel impersonal, inevitable and universal. These boys might as well be battling against time, or the weather, or the devil, and the emotional beats draw deeply. There is a panicky dread about “Dunkirk;” it is, more than anything, about feeling trapped, looking for a way out, and seeing only the dimmest chance of escape. This is a movie about defeat and survival, which we all have experienced, in one form or another. It’s a powerful film, probably Nolan’s best, and certainly one of the best of the year.